The application of micro-computed tomography (micro-CT) scanning has enabled digital modelling and articulation of a fossil that has provided the evidence needed to record the first discovery of a pterosaur with an opposed thumb. Dubbed ‘Monkeydactyl’, the fossil Jurassic flying reptile now represents the earliest record of a true opposed thumb in Earth’s history. 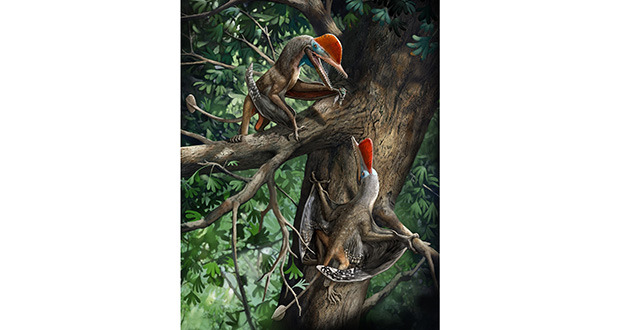 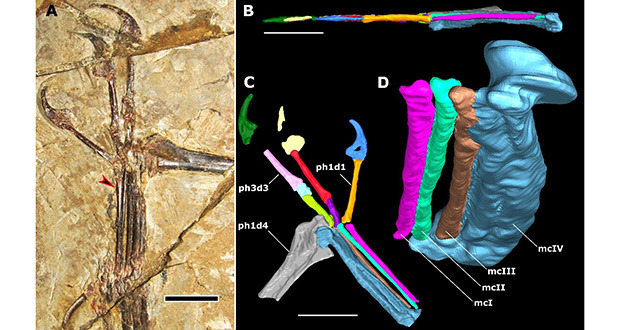 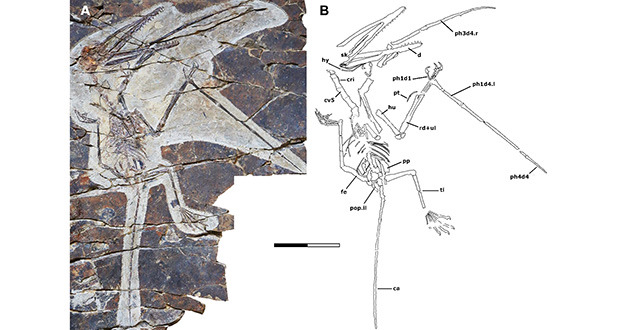 Image: Life reconstruction of K. antipollicatus. The opposed pollex could have been used for grasping food items, as well as clinging and hanging to trees. Credit: Chuang Zhao

An international team of researchers from China, Brazil, UK, Denmark and Japan have described a new Jurassic pterosaur Kunpengopterus antipollicatus, which was discovered in the Tiaojishan Formation of Liaoning, China.

It is a small-bodied darwinopteran pterosaur, with an estimated wingspan of 85 cm. Most importantly, the specimen was preserved with an opposed pollex (“thumb”) on both hands.

The species name ‘antipollicatus’ means ‘opposite thumbed’ in ancient Greek, in light of the opposed thumb of the new species. This is the first discovery of a pterosaur with an opposed thumb. It also represents the earliest record of a true opposed thumb in Earth’s history. The researchers published their discovery today in the journal Current Biology.

A true opposed pollex is mostly present in mammals (e.g. primates) and some tree frogs, but extremely rare among extant reptiles except for chameleons. This discovery adds to the list that darwinopteran pterosaurs such as K. antipollicatus also evolved an opposed thumb. The research team scanned the fossil of K. antipollicatus using micro-computed tomography (micro-CT), a technique making use of X-ray to image an object. By studying its forelimb morphology and musculature, they suggest that K. antipollicatus could have used its hand for grasping, which is likely an adaptation for arboreal life. Image: Fossil of K. antipollicatus, discovered in the Tiaojishan Formation of China. It is housed in the Beipiao Pterosaur Museum of China. Credit: Zhou et al., 2021

Fion Waisum Ma, co-author of the study and PhD researcher at the University of Birmingham, said: “The fingers of ‘Monkeydactyl’ are tiny and partly embedded in the slab. Thanks to micro-CT scanning, we could see through the rocks, create digital models and tell how the opposed thumb articulates with the other finger bones.

“This is an interesting discovery. It provides the earliest evidence of a true opposed thumb, and it is from a pterosaur - which wasn’t known for having an opposed thumb’ she added.

Xuanyu Zhou from China University of Geosciences who led the study commented: “Tiaojishan palaeoforest is home to many organisms, including three genera of darwinopteran pterosaurs. Our results show that K. antipollicatus has occupied a different niche from Darwinopterus and Wukongopterus, which has likely minimised competition among these pterosaurs.”

Rodrigo V. Pêgas from Federal University of ABC, in Sao Bernardo, Brazil, said: “Darwinopterans are a group of pterosaurs from the Jurassic of China and Europe, named after Darwin due to their unique transitional anatomy that has revealed how evolution affected the anatomy of pterosaurs throughout time.

“On top of that, a particular darwinopteran fossil has been preserved with two associated eggs, revealing clues to pterosaur reproduction. They’ve always been considered precious fossils for these reasons and it is impressive that new darwinopteran species continue to surprise us!”