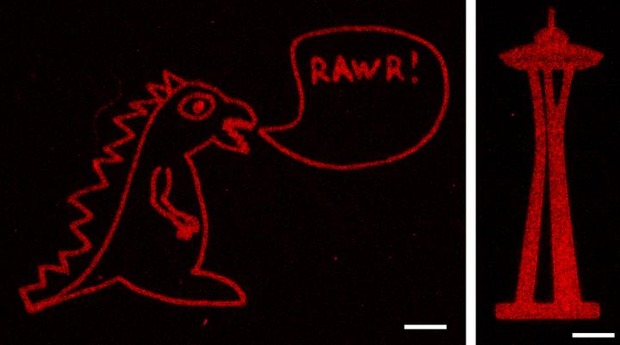 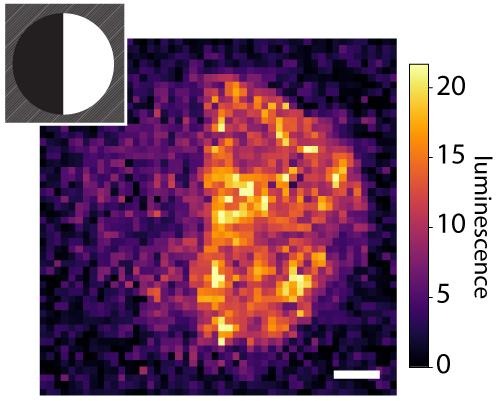 Image: The team used near-infrared lasers to create this intricate pattern in the shape of a human heart of immobilized mCherry proteins, which glow red under fluorescent light, within a collagen hydrogel. On the left is a composite image of 3D slices from the gel. On the right are cross-sectional views of the mCherry patterns. Scale bar is 50 micrometers. Credit: Batalov et al., PNAS, 2021

Imagine going to a surgeon to have a diseased or injured organ switched out for a fully functional, laboratory-grown replacement. This remains science fiction and not reality because researchers today struggle to organise cells into the complex 3D arrangements that our bodies can master on their own.

There are two major hurdles to overcome on the road to laboratory-grown organs and tissues. The first is to use a biologically compatible 3D scaffold in which cells can grow. The second is to decorate that scaffold with biochemical messages in the correct configuration to trigger the formation of the desired organ or tissue.

In a major step toward transforming this hope into reality, researchers at the University of Washington have developed a technique to modify naturally occurring biological polymers with protein-based biochemical messages that affect cell behaviour. Their approach, published in the Proceedings of the National Academy of Sciences, uses a near-infrared laser to trigger chemical adhesion of protein messages to a scaffold made from biological polymers such as collagen, a connective tissue found throughout our bodies. Image: Top view of two collagen hydrogels that researchers decorated with immobilized mCherry proteins, which glow red under fluorescent light. The team scanned near-infrared lasers in the shapes of a monster (left) and Seattle's Space Needle (right) to create these patterns. Black regions were not scanned with the laser, and so the mCherry protein did not adhere to those portions of the hydrogel. Scale bar is 50 micrometers. Credit: Batalov et al., PNAS, 2021

Mammalian cells responded as expected to the adhered protein signals within the 3D scaffold, according to senior author Cole DeForest, a UW associate professor of chemical engineering and of bioengineering. The proteins on these biological scaffolds triggered changes to messaging pathways within the cells that affect cell growth, signalling and other behaviours.

These methods could form the basis of biologically based scaffolds that might one day make functional laboratory-grown tissues a reality, said DeForest, who is also a faculty member with the UW Molecular Engineering and Sciences Institute and the UW Institute for Stem Cell and Regenerative Medicine. "This approach provides us with the opportunities we've been waiting for to exert greater control over cell function and fate in naturally derived biomaterials -- not just in three-dimensional space but also over time," said DeForest. "Moreover, it makes use of exceptionally precise photochemistries that can be controlled in 4D while uniquely preserving protein function and bioactivity."

DeForest's colleagues on this project are lead author Ivan Batalov, a former UW postdoctoral researcher in chemical engineering and bioengineering, and co-author Kelly Stevens, a UW assistant professor of bioengineering and of laboratory medicine and pathology.

Their method is a first for the field, spatially controlling cell function inside naturally occurring biological materials as opposed to those that are synthetically derived. Several research groups, including DeForest's, have developed light-based methods to modify synthetic scaffolds with protein signals. But natural biological polymers can be a more attractive scaffold for tissue engineering because they innately possess biochemical characteristics that cells rely on for structure, communication and other purposes.

"A natural biomaterial like collagen inherently includes many of the same signaling cues as those found in native tissue," said DeForest. "In many cases, these types of materials keep cells 'happier' by providing them with similar signals to those they would encounter in the body."

They worked with two types of biological polymers: collagen and fibrin, a protein involved in blood clotting. They assembled each into fluid-filled scaffolds known as hydrogels.

The signals that the team added to the hydrogels are proteins, one of the main messengers for cells. Proteins come in many forms, all with their own unique chemical properties. As a result, the researchers designed their system to employ a universal mechanism to attach proteins to a hydrogel -- the binding between two chemical groups, an alkoxyamine and an aldehyde. Prior to hydrogel assembly, they decorated the collagen or fibrin precursors with alkoxyamine groups, all physically blocked with a 'cage' to prevent the alkoxyamines from reacting prematurely. The cage can be removed with ultraviolet light or a near-infrared laser.

Using methods previously developed in DeForest's laboratory, the researchers also installed aldehyde groups to one end of the proteins they wanted to attach to the hydrogels. They then combined the aldehyde-bearing proteins with the alkoxyamine-coated hydrogels, and used a brief pulse of light to remove the cage covering the alkoxyamine. The exposed alkoxyamine readily reacted with the aldehyde group on the proteins, tethering them within the hydrogel. The team used masks with patterns cut into them, as well as changes to the laser scan geometries, to create intricate patterns of protein arrangements in the hydrogel -- including an old UW logo, Seattle's Space Needle, a monster and the 3D layout of the human heart.

The tethered proteins were fully functional, delivering desired signals to cells. Rat liver cells -- when loaded onto collagen hydrogels bearing a protein called EGF, which promotes cell growth -- showed signs of DNA replication and cell division. In a separate experiment, the researchers decorated a fibrin hydrogel with patterns of a protein called Delta-1, which activates a specific pathway in cells called Notch signalling. When they introduced human bone cancer cells into the hydrogel, cells in the Delta-1-patterned regions activated Notch signaling, while cells in areas without Delta-1 did not.

These experiments with multiple biological scaffolds and protein signals indicate that their approach could work for almost any type of protein signal and biomaterial system, DeForest said.

"Now we can start to create hydrogel scaffolds with many different signals, utilizing our understanding of cell signaling in response to specific protein combinations to modulate critical biological function in time and space," he added.

With more-complex signals loaded on to hydrogels, scientists could then try to control stem cell differentiation, a key step in turning science fiction into science fact.