Stephen Hawking’s recent paper on black holes suggests physicists give up the very thing that makes them so interesting; the event horizon. Doing this keeps the warring theories of general relativity and quantum physics intact, but eliminates the Firewall Paradox, which – since first theorised in 2012 – has vexed physicists. The event horizon marks the point of no return – it is an invisible area around a black hole beyond which ingestion is inevitable. If you wanted to escape, you’d need to be travelling faster than the speed of light. But Stephen Hawking – in an attempt to solve the Firewall Paradox – has done away with the event horizon. They don’t exist, he says, at least not in the way physicists once thought; instead he proposes a more benign apparent horizon. Black holes are the mathematical consequence of Einstein’s theory of general relativity, which predicts that anything very heavy and very small would create such a strong gravitational field that space and time would be bent and twisted to breaking point. The gravitational field is so strong that nothing – not even light – can escape. The theory predicted that it could deflect light: light from stars, as seen from Earth, should be rebounded by the enormous gravity of the black holes in an effect known as gravitational lensing, and measuring the deflection can infer the existence of the hole. The gravity also attracts dust and gas into an accretion disc, friction in which heats the material which then emits radiation that can be detected by telescopes. General relativity suggests that an astronaut in freefall should perceive the laws of physics as being identical everywhere in the Universe, with the event horizon as a fairly unremarkable place. While the astronaut would not feel any effects, for observers, time seems to stand still; they would see the astronaut gradually stretched out like spaghetti before being crushed at the point of singularity – the black hole’s theoretically infinitely dense core. But this singularity is where Einstein’s theory breaks down; the curvature of spacetime becomes infinite and the known laws of physics and spacetime cease to operate. The description is incomplete, but we know that the effects of quantum gravity become significant near the boundary. In 1974, Stephen Hawking used quantum theory to predict that black holes emit small amounts of matter and energy – Hawking radiation – which would cause black holes to shrink and eventually disappear. Although unobserved, working models and simulations of event horizons suggest that this should happen. Quantum theory predicts the event horizon to be a highly energetic place, where the freefalling astronaut would be burned to a crisp says Joseph Polchinski of the Kavli Institute for Theoretical Physics at the University of California Santa Barbara. In 2012, following a thought experiment, Polchinski and his colleagues proposed the Firewall Hypothesis which suggests that information leaving a black hole would produce a massive amount of energy, creating a wall of fire at the event horizon that would consume everything falling into it. “The firewall paradox is the latest wrinkle in physicists’ attempts to understand how black hole evaporation can obey the fundamental laws of quantum mechanics. In particular, there is a rule that says "information is conserved": in principle, if you collected all of the information from the Hawking radiation that comes out of the hole, you should be able to reconstruct the information that went into making it in the first place. (Similarly, the laws of physics say that you should be able to reconstruct the contents of an encyclopaedia by observing the radiation emitted by burning it. It's a matter of principle, not practice),” says Sean Carroll a physicist at the California Institute of Technology. “The requirement of information coming out of black holes placed very strong constraints on the entanglement of that radiation – the quantum connection between particles at different locations. If information is to escape, the radiation that comes out at late times needs to be entangled with radiation that came out early on. But according to conventional wisdom, the event horizon of a black hole is a relatively peaceful place; you wouldn't even notice when you fell in. That implies that outgoing radiation is entangled with ingoing radiation. But both of those things can't be true at the same time (late outgoing radiation is entangled with both early outgoing radiation and with ingoing radiation): quantum entanglement is "monogamous," and one bit of radiation can only be maximally entangled with one other bit. Polchinski and colleagues suggested that perhaps the thing to go is the peacefulness of the event horizon, and put forward the idea that it is actually a wall of fire.” 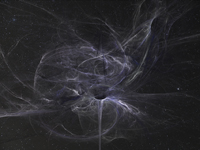 This thought was alarming to physicists; if true, Einstein’s theory of general relativity would be wrong. Enter Hawking. His latest paper Information Preservation and Weather Forecasting for Black Holes has done away with the idea of event horizon, in favour of apparent horizons. It keeps quantum mechanics and the theory of general relativity intact, while eliminating the firewall paradox. Key to Hawking’s idea is that quantum effects around a black hole cause spacetime to fluctuate too wildly for a sharp boundary to exist. “The absence of event horizons means there are no black holes – in the sense of regime from which light can’t escape to infinity,” he writes in the paper posted on arXiv. “There are however apparent horizons which persist for a period of time.” These apparent horizons trap light temporarily, and since they vary in shape due to quantum fluctuations, there is the potential for light to escape. Importantly, his idea eliminates the firewall and abides by the rules of quantum mechanics and general relativity. If correct, there would be no singularity at the core of a black hole; instead matter would be temporarily held behind the apparent horizon which would move inward owing to the pull of the black hole, but never quite condense to the centre. The structure of the black hole just below the horizon is chaotic, Hawking says, information about the matter still exists and can be lost as Hawking Radiation but it would impossible to interpret in its original form. “The chaotic collapsed object will radiate deterministically, but chaotically,” he writes. “It will be like weather forecasting on Earth. That is unitary, but chaotic, so there is effective information loss. One can’t predict the weather more than a few days in advance.” Polchinski, unsurprisingly, disagrees with Hawking. He believes that the kind of violent fluctuations needed to erase the event horizon are too rare in the Universe. “In Einstein’s gravity, the black-hole horizon is not so different from any other parts of space,” he says. “We never see space-time fluctuate in our own neighbourhood: it is just too rare.” And he’s not the only one sceptical of Hawking’s new proposal. Raphael Bousso, a theoretical physicist and former student of Hawking says: “The idea that there are no points from which you cannot escape a black hole is in some ways an even more radical and problematic suggestion than the existence of firewalls. But the fact that we’re still discussing such questions 40 years after Hawking’s first papers on black holes and information is a testament to their enormous significance.” Carroll too is doubtful: “Hawking's proposal to avoid this problem is, to be candid, not very well developed. It's sort of a sketch of an idea that he gave at a conference talk. But basically he is saying that, because black holes eventually evaporate, there is never really an event horizon there in the first place. Because an event horizon is the point past which you can't escape, and if the hole evaporates away you can always escape eventually. It's not clear to most people how that might solve the problem, but perhaps a longer paper by Hawking will make things more clear.” Instead, Carroll says, most in the field think that in order to avoid the firewall paradox, something else must be wrong – the locality. Locality says that things that happen in space happen at a certain locality, with the remaining space affected by it, like a pebble in the middle of a pond whose influence spreads from a central point to areas further away. Entanglement stretches the concept of locality, but doesn’t eliminate it as dynamics and signalling will still be ‘local’ in space. It might be an easy thing to consider eliminating, but in practice is hard to do. So why is it important to figure out what is going on near black holes? It is believed they may have aided galaxy formation, and studying them has demonstrated just how the Universe ‘hides’ matter, accounting for missing matter falling outside our mathematical computations of the Universe. We know that this dark matter must exist because there isn’t enough visible matter to account for the gravity which binds galaxies and large-scale structures together; we just don’t know where it is hiding. A paper submitted to arXiv in 2011 by Michael Hawkings suggests that “black holes should be seen alongside elementary particles as viable dark matter candidates,” and that they are likely to make up the dark matter component of the Universe1. A 2014 paper by Russian scientists suggests that dark matter might be hiding in microscopic black holes, so-called black hole atoms2. The hypothesis is based on the friedmon theory. The friedmon is a micro black hole with an anelectric charge, and a mathematical solution of the Einstein field equation – key constituents of the theory of general relativity. Neutral black hole atoms should have the same properties that dark matter is thought to possess, therefore these black hole atoms should possess all the same properties as dark matter candidates. Until quantum mechanics and the theory of general relativity can be reconciled, we won’t fully understand what happens near a black hole, or what dark matter is. For now we have to rely on great minds like Hawking, and the amazing capabilities of telescopes both in space and on Earth. What we do know is that we will probably still be discussing the topic for years to come. References