Nanoparticles could well be the future of fingermark detection. Not only do they promise sensitivity and selectivity, but they have also furthered our understanding of the fundamentals behind fingerprint detection

Nanoparticles could well be the future of fingermark detection. Not only do they promise sensitivity and selectivity, but they have also furthered our understanding of the fundamentals behind fingerprint detection

Despite the recent and widely publicised advances of DNA exploitation in criminal investigations, fingermarks remain a mainstay of the criminal justice system and their successful detection is crucial for law enforcement. In fact, more than a century after their first use, fingermarks still constitute an active field of research and both police forces and scientists are working together to design ever more efficient techniques allowing their detection.

Fingermarks are formed upon contact of the fingers with any substrate through a transfer of secretions and contamination present on the skin surface. The endogenous compounds found on the fingers may have various origins. They can be produced by eccrine glands located on the fingers or by sebaceous glands brought on by contamination from other parts of the body. There can also be exogenous compounds such as dirt, cosmetics, blood or other biological fluids1. Since most of fingermarks are latent, they must first be detected using physical, chemical or even physicochemical techniques. Unlike the methods portrayed in popular culture, this is a challenging task – the final composition and ratio of these constituents is greatly affected by numerous uncontrolled parameters such as age, diet, health, gender or activity of the donor, to cite just a few. After its deposition, the mark itself is subjected to changes. Its chemical composition and its physical features evolve according to factors unknown at the time of detection, such as storage conditions or time elapsed since deposition.

Therefore, dozens of detection techniques have been designed to counteract t fingermark variability and tame uncontrolled parameters2. Yet every single one relies on the same principle: the creation of a contrast between the mark and its underlying substrate, while keeping the pattern it forms intact. The choice for one method over another is mainly influenced by the type of surface to be treated. Today, the most common techniques used worldwide include powder dusting3, cyanoacrylate fuming4 or amino acid reagents5. Other specific means exist to detect fingermarks on sticky-tape or items contaminated with blood. In order to maximise the chances of success, these methods are generally applied sequentially, to successively detect various target types present in secretions such as water-soluble compounds and lipids.

Even if the emergence of luminescent detection techniques has been a significant step forward in decreasing sensitivity threshold, the field remains far for being perfect and there is a sustained need for improvement in ease of application, selectivity and of course sensitivity. It has been estimated that 50% of the marks remain undetected on paper6. In other words, in real cases, half the fingermarks left by perpetrators may remain undetected, hence unidentified. Moreover, some techniques show an affinity not only for fingermarks but also for the substrate itself, leading to background staining that conceals the mark. Also, the use of new surfaces, like recycled materials, gives rise to new challenges for the field, reinforcing the constant need for novel and more effective approaches. 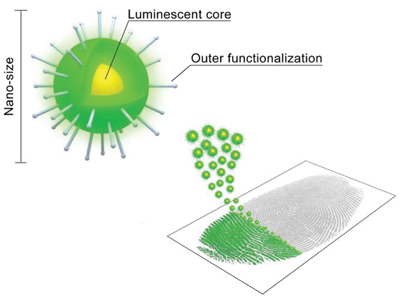 Among various trends of research – nanotechnology and its applications is currently the most active and promising field in the fingermark detection area7. Their low size, tunable surface abilities and optical properties are the three key-parameters that drive most of the attention and make nanoparticles a potentially very effective tool for fingermark detection (Figure 1). Nanometric size can lead to high resolution detection, helping to visualise the very fine details of the mark that are sometimes concealed by over-deposition of dusting powder or over-development by cyanoacrylate fuming. The precise targeting of compounds present in the fingermark can be achieved by grafting selected chemical functions or molecules onto the nanoparticles’ surface. In that regard, techniques based on immunodetection could specifically target one component in particular. Detection of substances such as caffeine, nicotine or drugs within the mark could provide useful information on the fingermark’s donor for example8. Lastly, the nanoparticle’s various optical properties can lower the detection limits and improve the sensitivity by using luminescence to get rid of background interferences. Specific types of nanoparticles offer unusually large Stokes shift that will help to get rid of background interferences. Other properties such as near infra-red luminescence, phosphorescence or even anti-Stokes shift could further increase sensitivity. These three key-features combined together make nanoparticles the future of fingermark detection. 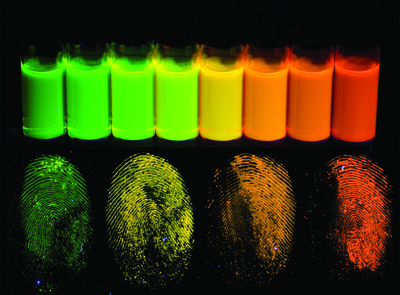 Till now, numerous nanoparticles types have already been investigated in this context with varying success. To cite a few, applications of metallic9, metal oxide10, semiconductors (such as quantum dots11, figure 2) or even silicon oxide nanoparticles12 have already been reported. Nanoparticles have been applied through powder dusting or by immersing the item bearing fingermarks in a solution containing the nanoparticles. However, despite the promising results obtained so far, the three key-features presented above have not yet been combined into a single nanoparticle type and the expectations are still far from being reached. Metallic and metal oxide nanoparticles are not – or only weakly – luminescent. On the other hand, strongly luminescent semiconductor nanoparticles, such as quantum dots, are difficult to functionalise without compromising their optical properties.

Therefore very few techniques based on nanoparticles have been used in real case work. While promising, the outcomes are yet to prove satisfactory; performances remain generally below the current available techniques in terms of sensitivity and selectivity. This limited success is mostly due to the fact that nanoparticles are primarily designed for applications outside forensic science and cannot be directly applied to fingermark detection. Moreover, nanoparticle-based approaches are often tedious and complex to implement; nanoparticles are rarely readily available and must be synthetised beforehand, which requires specialised technology not available to a standard forensics laboratory. The application itself implies specific skills and often expensive equipment restricting its access to just a few police services. Moreover, health and safety issues remain major concerns that should be addressed before any wider scale application, especially if application in powder form is considered. The application of nanoparticles to fingermark detection calls for more research to provide valid, safe and sound methods to practitioners for an actual and effective use on crime scenes. 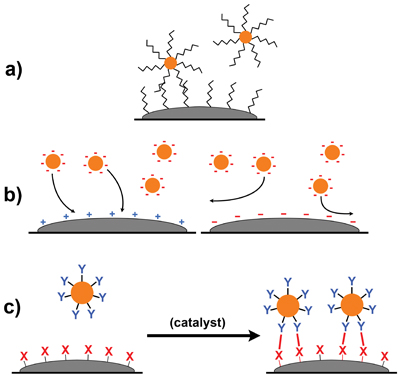 Figure 3: Schematic illustration of the three main interaction hypotheses occurring between nanoparticles and fingermark residue, a) physical, b) electrostatic and c) chemical.[/caption] 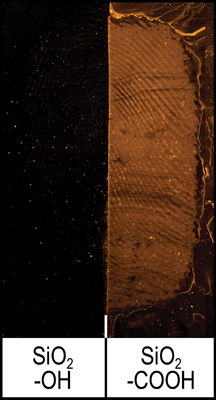 Figure 4: Illustration of the effect of the functional group grafted on the surface of silicon oxide nanoparticles.[/caption]

In a specific study published last year13, silicon oxide nanoparticles were used to investigate the interaction phenomenon. These particles were selected for their simplicity and versatility: size, optical behaviour and surface properties can be precisely adjusted at will, making them a powerful tool for fundamental research. Therefore, luminescent silicon oxide nanoparticles functionalised with various chemical groups were used in water-based solutions. Parameters, such as the functional groups on the nanoparticles’ surface, the pH of the solution or the zeta potential of the particles, were varied to study the influence on the detection efficiency (Figure 4). The main results helped challenge the current widely accepted theory stating that nanoparticles are electrostatically attracted onto fingermarks. It appears, through extensive experiments conducted during the study, that the interaction is in fact chemically driven. The carboxyl groups grafted at the nanoparticles’ surface react with amine groups available in the fingermark secretions thus enabling detection.

The promotion of a chemical reaction between nanoparticles and a specific chemical group of fingermark secretions opens broader perspectives. The established interaction can be finely tuned to further increase selectivity and reduce background noise. Since the carboxyl group is not the only chemical function found in fingermark residue, other groups can be targeted as well, multiplying chances of detecting previously challenging fingermarks.

Designing an effective fingermark detection technique based on nanoparticles can only be achieved through a detailed understanding of the mechanisms at stake. By pursuing this effort and by taking into account final users’ limitations as well as the very restrictive requirements imposed by fingermark residue, effective detection techniques will be developed to complement current available methods and help solving sensitivity and selectivity issues. Nanoparticles are the future of fingermark detection but more research is needed, with a stronger focus on realistic applications. This requires re-visiting fingermark residues themselves and their interaction with common substrates as much as researching into new detection methods.

Dr Sébastien Moret is a Postdoctoral Fellow funded by the Swiss National Science Foundation at the Centre for Forensic Science at the University of Technology Sydney in Australia.