It is well-established that parasites can affect the behaviour of their hosts, but can a parasitical worm really get a cricket to shut-up? Dr Megan Wise de Valdez thinks so, and here she tells us why 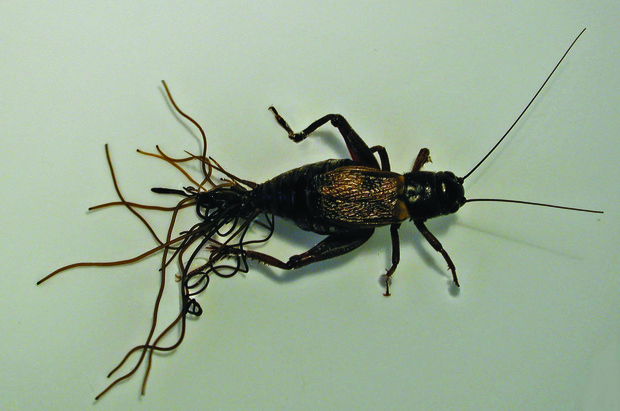 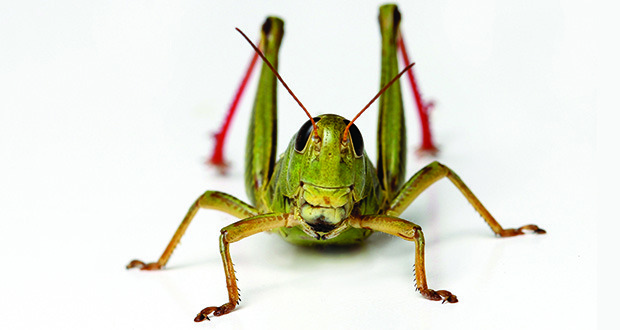 It is well-established that parasites can affect the behaviour of their hosts, but can a parasitical worm really get a cricket to shut-up? Dr Megan Wise de Valdez thinks so, and here she tells us why

Parasites have been known to induce behavioural changes in their host1 and of interest is whether these behavioural changes are a product of evolution benefiting the parasite or are merely side-effects of an intense infection. If evolution is in play, parasites with complex life cycles would be predicted to alter behaviours in ways that increase the chance the parasite will reach the next host in their life cycle, such as inducing risky behaviour that increase predation rates by the next host.

Parasites that have a free-living stage might alter host behaviours in ways that ensure delivery to the appropriate habitat for emergence; keep the host alive long enough for parasite development (non-risky behaviour) or; reserve energy for the developing parasite2. Parasites in the phylum Nematomorpha, commonly called horse-hair worms, are parasites with a free-living stage that require an insect host, such as crickets, grasshoppers, cockroaches, or beetles, for development and as well as to deliver them to streams or lakes for their free-living reproductive stage3. In fact, it is well established that horse-hair worms change the behaviours of their cricket hosts by causing them to jump into water, essentially committing suicide4. It has not been established however, whether other cricket behaviours are manipulated prior to nematomorph maturity and emergence.

Our team, a collaboration of faculty mentors and undergraduates from Texas A&M-San Antonio and the University of New Mexico, conducted a study recently published in the Journal of Parasitology in which we evaluated the effect of Paragordius varius (a nematomorph) on the calling behaviour of male Acheta domesticus crickets5. According to our hypothesis, parasites with free living stages should change behaviours in ways that reduce risk of predation or save energy; calling behaviour should therefore be a prime target for nematomorph manipulation because it is known to attract auditory predators and parasitoids6 and is energetically expensive7. This is the first study to address whether nematomorph-induced behavioural alterations, other than induced suicide behaviour, occur in this parasite-host relationship.

We wondered whether crickets infected with P. varius call less or stop calling altogether. Our hypothesis was that they would call less, not only because calling less would presumably reduce the risk of predation by auditory predators, but would also conserve energy, allowing sufficient energy reserves to be available for worm development.

Because male crickets housed in close proximity to other males can develop a “caller” or “non-caller” status, does infection with P. varius alter their status? Including this parameter, the study begins to address the complex nature of cricket calling behaviour that must be taken into account in order to accurately assess if changes in calling behaviour are due to infection or cricket status.

Does presence or absence of wings at time of infection with P. varius influence calling behavioural change? Answering this question may help in determining whether the behavioural changes are a side effect of infection or an adaptation. If cricket behaviour was reduced only when the cricket was infected prior to wing development, we might conclude that the infection hindered wing development, and thus was just a side effect. However, if reduced calling regardless of when a cricket became infected, we might consider this as one puzzle piece towards the hypothesis of adaptation. 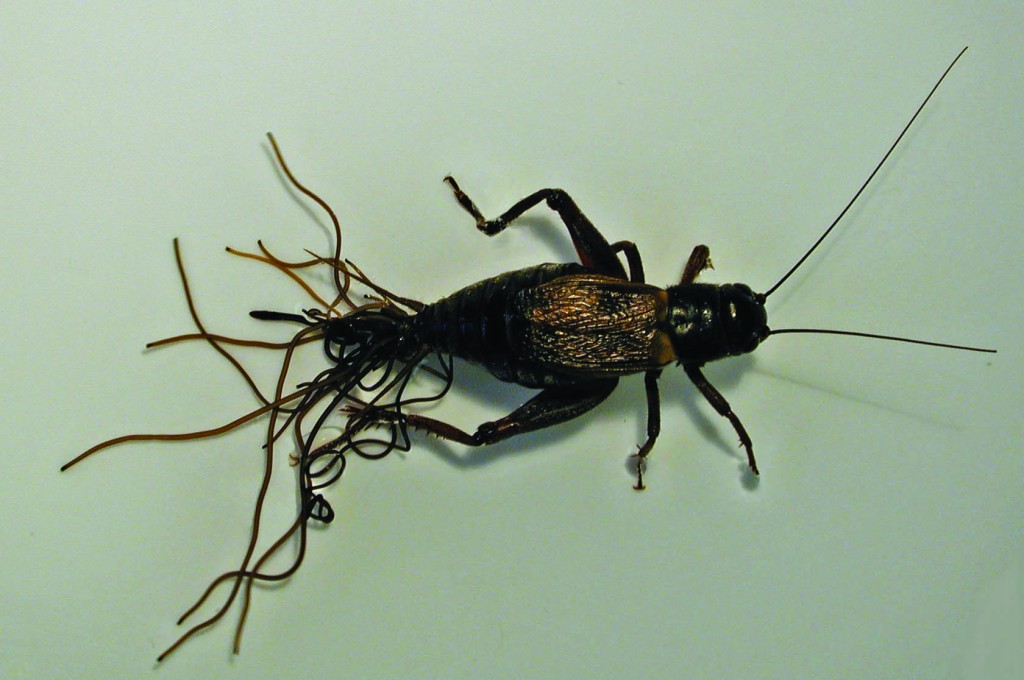 The parasitical worms of P.varius appear to alter the calling behaviour of this species of cricket. Credit: Ben Hanelt[/caption]

In both trials we used a digital system to record calling behaviour of individual crickets every 5 seconds over a 12 hour period every 5 days post worm exposure. All crickets were individually marked in order to track their calling behaviour over time as well as to pair the behaviour with infection status. Exposure to P. varius cysts does not always result in an infection; therefore, infection status was determined only after crickets were exposed to water to trigger worm emergence at the end of the trial. We evaluated over 70 crickets over the course of a month with at least half infected with P. varius. With these data (amounting to 8640 data points per cricket per 12-hour period) we were able to evaluate average calling intensity and percent of time spent calling over the course of the 26-30 days needed for nematomorph development. We were also able to assess whether crickets that were callers became non-callers and vice versa.

With these data we cannot definitively answer the question of whether this reduction in calling behaviour is a side-effect of infection or an adaptation benefitting the parasite but it does provide a starting point from which we can begin to develop the hypothesis for adaptation further and it is the first study to show that calling behaviour in crickets is indeed reduced when infected with nematomorph parasites.

Further studies that will help to elucidate the question of adaptation will include field-caught crickets from areas where P. varius is naturally found as well as predation studies with auditory predators; in this way we can evaluate whether these behavioural changes translate into increased survival of the cricket and thus the worm in a semi-natural setting.