Creating healthy spaces that improve our physical and mental well-being is at the top of everyone's priorities at the moment. As a spring holiday treat rather than an entirely scientific exercise, Bloom & Wild, the leading letterbox florist, has worked with several architects and graphic designers to reimagine some of the world's most famous landmarks using biophilic design and offers expert advice on how you can bring biophilic design into your home... 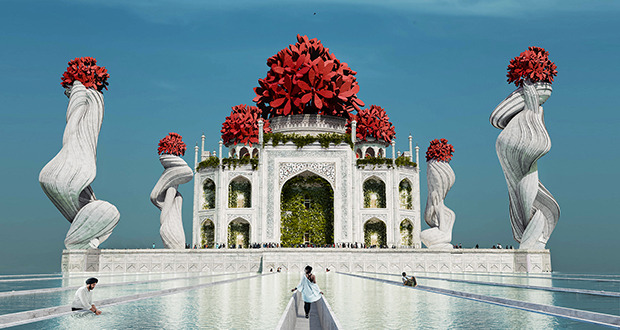 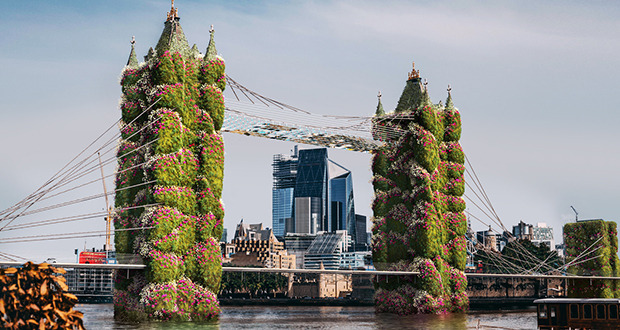 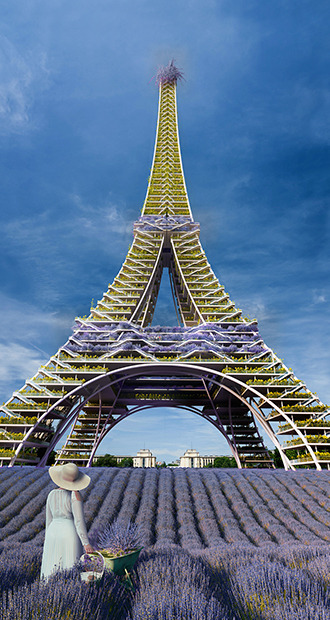 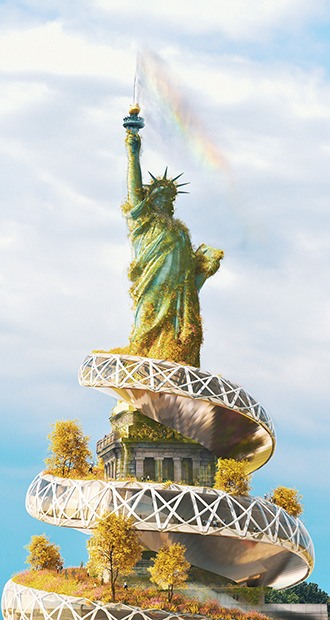 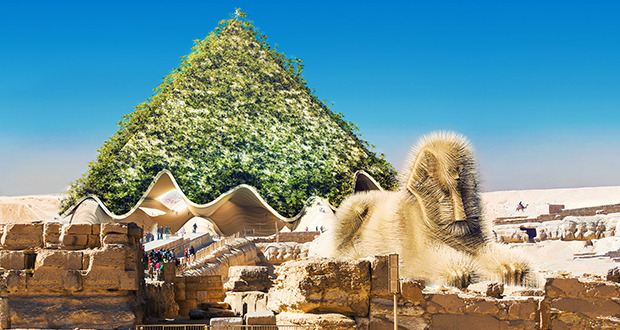 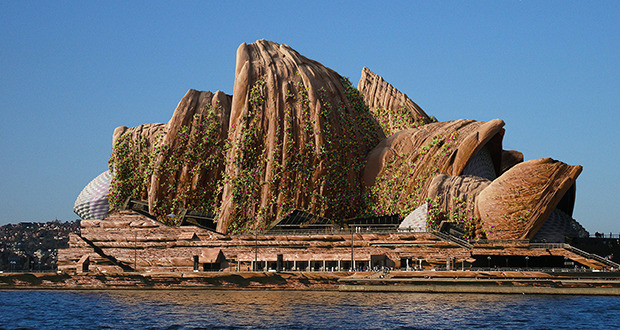 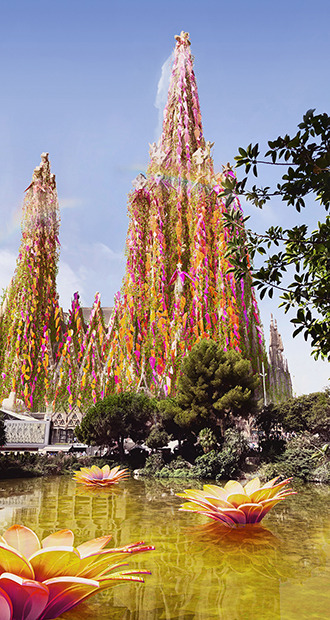 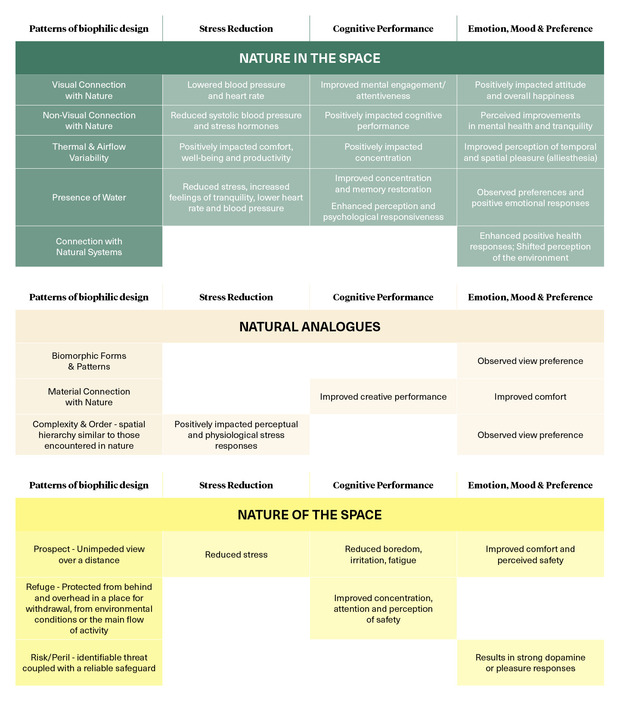 As you read in our recent cover story by Robert Hopkins in the Jan/Feb issue, Biophilic design is an architectural and interiors concept all about bringing the outdoors in and creating a healthy living environment.

In addition to reimagining some of the world's most famous landmarks using biophilic design, Bloom & Wild also spoke with Yaniv Peer, director at Iguana Architects, on how the everyday person can bring biophilic design into their home.

Biophilic design has been proven to improve the health of spaces, and the people who use them. Check out this handy table below that shows how patterns of biophilic design can help stress reduction, cognitive performance, and emotional wellbeing.

About our seven blooming biophilic reimaginings We redesigned this iconic bridge with bushes covering the towers which are closely tied with Britain’s historical association with grand manor houses and their perfectly kept gardens. Neatly encased in each crevice are flowers inspired by our own lovely flower bouquets that include freesias, snapdragons, lisianthus, and meadowy foliage.The tops of the towers are covered in ivy, and the structure is further supported by a network of ropes to resemble the country’s connection to medieval history. We also placed several small mirrors on the underside of the bridge to connect the top sections of the towers, and to signify London’s ever-growing skyline while allowing pedestrians to see a part of themselves in one of London’s most iconic structures. Unveiled in 1886, The Statue of Liberty was a gift to America from the French to commemorate their alliance during the Revolution.

In our redesign, we covered the statue in moss to changes with the seasons as the rest of the great American countryside does. We added Sequoia and Birch trees, along with some grassy areas to represent both the iconic Manhattan spring/fall seasons and to connect the statue to America’s vast network of forests and famous national parks.

A spiral walkway was placed to add a touch of modernity to the statue. A fountain has also been created in the statue's signature torch to signify a connection to America’s great lakes and surrounding coastline. Commissioned by Mughal emperor Shah Jahan in 1632 as a tomb for his favourite wife, the Taj Mahal, is the most visited tourist spot in India and a symbol of eternal love.

We redesigned the iconic pillars in the style of India’s famous trail tree trunks, while sitting on top of the pillars are jungle geranium or Ixora Coccinea. Hanging plants appear on the walls behind the front-facing arches and window frames, and in place of the famous reflecting pool in front of the Taj Mahal, we created an extensive network of water bridges to reflect the importance of water in Indian cultures. As one of the most recognisable landmarks in the world, the Eiffel Tower was built to show off France’s innovative and modern mechanical designs.

We kept the redesign simple by lining the grounds with lavender, the traditional flower of the French countryside. As you move up the tower, we placed shelves containing bunches upon bunches of sunflowers - France's second most loved flower! Lavender also coats the staircase as well as the observation decks and the very top of the tower, producing a beautiful, purple floral statement. The Sydney Opera House is one of the 20th century’s most famous and creative pieces of architecture.

Drawing inspiration from Australia's iconic landscapes, we transformed the opera house into a structure to represent the distinctively different facets of the countryside. The classic shells have been redesigned to resemble Uluru, or Ayers Rock, with the dome-like exteriors taking inspiration from the Great Barrier Reef. The shells are also coated in traditional Australian plants and flowers, like Eucalyptus and Banksia. The Sagrada Familia is a large Roman Catholic minor basilica in Barcelona and is the world’s oldest construction project. Although construction started on the Sagrada Familia in 1882, it was never completed, largely due to it being interrupted by the Spanish Civil War. Currently, it is around 70% complete and is estimated to be finished in 2026.

We’ve redesigned the landmark in a biophilic way by creating a base layer of Mediterranean hanging plants like geraniums and durantas encasing the church. We then lined the body of the church with diamond-shaped mirrors decorated with shards of red, orange and pink, resembling the native flowers of Spain like Lantanas, Gazania, and Bougainvillea. Water sprays from the tops of the spires, splitting the light rays into beautiful rainbows. At the base of the church, we've placed mirror flowers in the ponds for more exotic beauty and colour. The Great Pyramid of Giza is the oldest of the Seven Wonders of the World. It was built around 2560 BCE and still remains mostly intact to this day. A tomb is a sacred space and tourists deserve to experience and enjoy the silence, peace, tranquillity and pure nature that it has to offer both outside and inside the structure.

As you can see we covered the existing pyramid shape with lush greenery. The sand dune reflected in the wave structure at the base of the pyramid was inspired by architect’s Chad Oppenheim’s interpretation of the landscape. Finally, we also rebuilt the most natural object of the land, the Sphinx, by restoring the animal to its former glory and placing thousands of fine branches to give it an ostensibly furry finish.

An architect’s advice: 7 ways to bring biophilic design into any home

With the right types of design approaches, our homes can help boost creativity and concentration, as well as becoming a more relaxing and rejuvenating environment. Yaniv Peer, and the team at Iguana Architects have shared a few ways we can all bring biophilic designs home (without always needing an architect):

Yaniv Peer, adds that he believes that the status quo should not be maintained. “Iguana was set up to challenge conventional thinking on how the spaces we inhabit should look and more importantly to show that these spaces can contribute to our physical and mental wellbeing”.

"Think about the last time you went on holiday to relax and unwind. It was unlikely to be a two-week break in the city centre and more like a getaway in the countryside or by the sea. Putting your feet up, breathing in the fresh air with the sun warming you while you sip on your favourite cocktail. There’s no feeling quite like it! And while those days will return again, hopefully soon, we don’t think you should have to wait for that one or twice a year feeling when our homes can help create spaces to make us feel less stressed".

Read the original article at the Bloom & Wild website

Also listen to our Podcast: Biophilic building with Robert Hopkins