Bioluminescence is visually magical and has inspired many scientists to dive deep to discover its secrets. As a result of this research, some fantastic research tools have been developed that help understand the mechanism of disease processes and have ultimately led helped us create vaccines and therapies. Here, Dermot Martin talks with Peter J Herring, an intrepid scientist and chronicler of marine bioluminescence who captured light from the oceans... 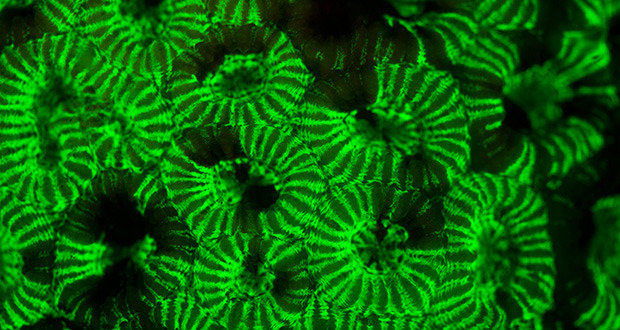 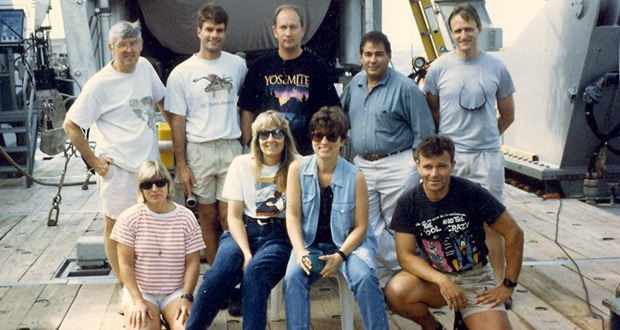 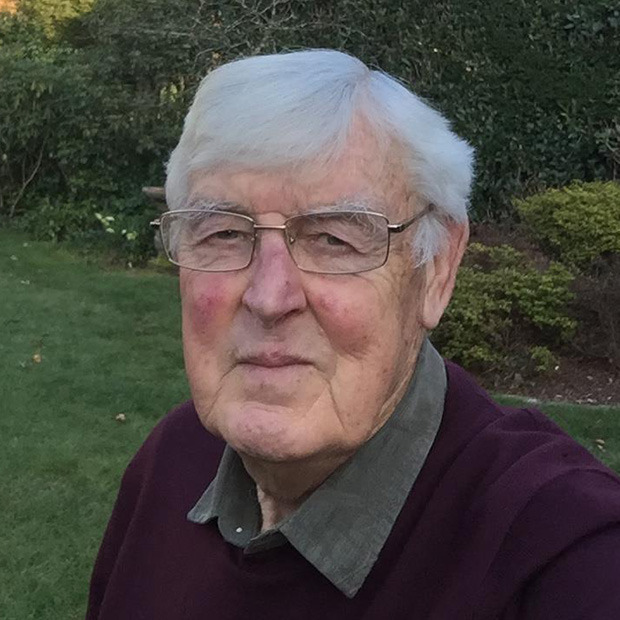 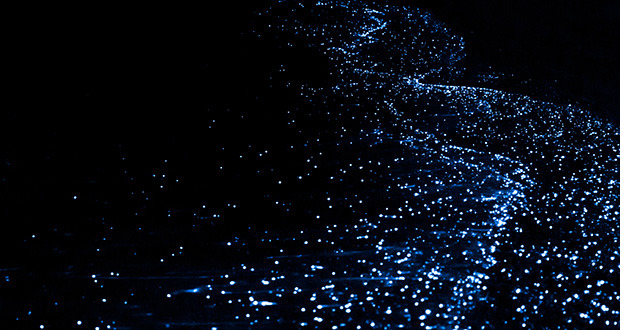 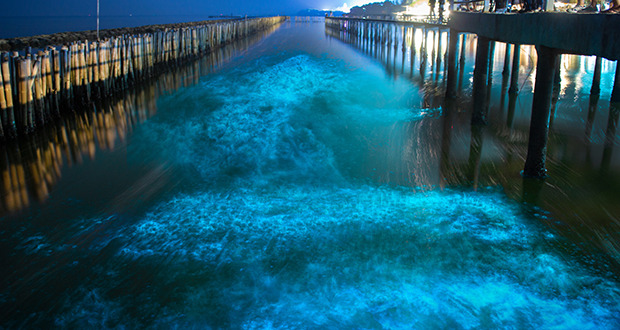 Image: A coral glows as fluorescent proteins within its tissues are excited by blue wavelengths of light. Electrons in atoms that make up the proteins jump levels and emit light as they return. Credit: Ethan Daniels

Charles Darwin, E Newton Harvey, Nobel laureate Osamu Shimamura and even Jacques Cousteau, are some of the star names among many for whom bioluminescent organisms became almost an obsession. The name Peter J Herring may not be so familiar but Herring has written or contributed to 250 scientific papers or books over more than 40 years. He was chief scientist on at least 60 expeditions and he made multiple discoveries not least the stunning “search light below the eyes” of one species of dragon fish. He has lived a life studying the light from The Deep.

Now in his eighties and enjoying retirement, he talked to Dermot Martin of a career studying the strange translucent lights of the oceans and muses on how climate change might affect the balance of marine life.

Image: Peter now has time to reflect on life adding to a body of scientific knowledge

Q: Why are we so fascinated by bioluminescence?

A: "Perhaps it’s partly the fact that it is something humans cannot do. We are familiar with the multiple uses if colour in our own world which depend on the reflection of light. Bioluminescence is a chemically inspired phenomenon originating from organisms living lives in near total darkness."

Q: When were you first drawn to marine bioluminescence?

A: “After Cambridge, in 1963, I spent 18 months as a research student in the Indian Ocean on the new research ship RRS Discovery. One night in the Arabian Sea we encountered a massive swarm of luminous ostracods. The net was literally dripped with stunning blue light. It was surreal. Up to then I wasn’t directly interested in BL.

"My early work was on the pigments of carotenoids and blue carotenoproteins. In 1966, I joined the UK Institute of Oceanographic Sciences to continue the work. We were studying the distribution of deep-sea animals and most of my colleagues were experts in particular groups, fish, krill, squid. My good fortune was to have expert taxonomists alongside me. That meant any species, even new ones, could be readily identified or named. On one occasion I noticed some flashing little amphipods. These were totally new to marine biologists and from that point I was hooked."

“Those first amphipods encouraged me to look for bioluminescent capabilities in any available specimens and I soon began to discover examples of BL in starfish, sea-cucumbers and sea-lilies. We accept the deep sea has species previously unknown to science, but we also uncover new examples of bioluminescence. Once discovered, it is the start of the search for its ecological significance." Q: The sea must be one of the most challenging yet stimulating environments in which to carry out scientific research. How does a scientist cope?

A: “It is wonderful! Being on a research vessel is exciting. You have an idea of what might be in the net but there are always surprises. You cannot take live specimens back home. You need to bring the laboratory to sea with you and make as many observations as possible while there is still some life in the specimens. It requires meticulously planning for sampling and research before setting sail, but those plans are easily disrupted or changed positively or negatively by circumstances. Changing weather, unexpected catches, sudden equipment failures are constant themes, so you have to be flexible and recognise that others have their own research objectives. Working as a team can be so rewarding.”

“Deep-sea research is expensive and financial support for marine bioluminescence research. It’s a case of no pain, no gain. However in the 1970s and 1980s there was a surge in interest by the military which saw an opportunity to use BL in the detection of submarines. That project came to nothing."

“After that, biologists reset the focus on the dynamics of phytoplankton and zooplankton and their involvement in the ocean’s response to climate change. That meant the opportunity to study the larger deep-sea creatures became limited. Yet, the economic and scientific benefits of studying bioluminescence are immense. A great example is the green fluorescent protein (GFP), isolated initially from many tons of a coastal jellyfish. GFP have been used to visualise many different processes within cells and has become an important tool for studying embryonic development and cancer among other things. It resulted in a Nobel Prize to Shimamura, Martin Chalfie and Roger Tsien."

“Today, genes for entire luminous systems, or specific components of them, can be inserted into almost any organism to act as observable markers of cellular or environmental conditions.”

“The most detailed knowledge of bioluminescence can be acquired for only those organisms that are readily available for study. It is no surprise that the systems of culturable luminous bacteria and dinoflagellates are the best known. The bacterial system has been seminal for the understanding of quorum sensing and its genetics is well understood, while dinoflagellates have contributed greatly to the vital study of circadian rhythms.'

“The goal is to understand the behavioural use of bioluminescence as well as we do that of fireflies. This is impossible at present for deep-sea animals, but the development of submersibles and ROVs, with phenomenally sensitive cameras, gives hope we will unpick the reasons for bioluminescence in the deep sea.” Peter had to acquire the skillset of a deep sea explorer to study marine bioluminescence (BL). It took courage and months spent at sea to gather specimens alongside his analytical eye and the laboratory skills to contribute to a growing body of knowledge. He became a legend among the close knit marine biological community. He fondly remembers making several seriously deep dives in the SeaLink manned submersibles.

“There I was, visiting marine animals in their own environment. Before, I had only known these creatures retrieved from net catches.  The beauty and delicacy of some of the more gelatinous species was extraordinary – and because we could carefully collect individuals and observe their responses in the ship’s dark laboratory their bioluminescence was equally mind-blowing!" he recounts.

“I would have loved to have experienced two quite extraordinary large-scale bioluminescent marine events, namely Milky Seas, where the whole ocean surface glows steadily, and Phosphorescent Wheels, where parallel or rotating bands of luminescence travel rapidly over the surface," he mused. "They are rare mystical events of tropical seas and neither is understood at all. I was unlucky.”

Herring and Haddock - part of a dream marine team The years of research for Peter are marked by teamwork. One ex-colleague is Steven Haddock, senior scientist at the Monterey Bay Aquarium Research Institute California.

Haddock said: “Peter’s contributions to knowledge on BL are eternal. He has been a great inspiration to me throughout my career. He was on my first big research cruise more than 30 years ago and several since, and has kept in touch. His broad and extensive insight on bioluminescence and deep-sea organisms made him a constant source of knowledge during our times together."

“I have many treasured memories," Haddock continued. "During one deep dive aboard a Johnson SeaLink submersible, Peter was in the front sphere connected only by a radio headset. Peering out my porthole, I saw what looked like an arrow worm (a lineage of animals called chaetognaths), which darted away leaving a plume of blue sparks in its wake. I shook my head in disbelief and asked Peter, 'Chaetognaths are not bioluminescent, are they?' ‘No’, came the reply ‘why do you ask?’"

“That single observation led to a long quest to figure out what it was that I had seen. Finally confirmation of chaetognath luminescence led to my first academic paper in Nature. It was remarkable to share this experience with Peter - the man who had written the paper cataloguing the names of all bioluminescent species."

Q: Where does climate change fit into the story of BL?

A: “Most of our oceans and their inhabitants are out of sight but they must not be out of mind. The threats of climate change are very real and will affect not only the physics and chemistry of the ocean but also the biology, with consequences that are hard to predict."

"We need to understand how the deep-sea ecosystem works in order to recognise any changes. We don’t know how deep-sea mining will affect the species near the sea floor. Will the mine tailings affect visual communication amongst organisms? Will ‘red tides’ and their associated bioluminescence and toxins become more or less widely distributed, with negative consequences for coastal fish stocks? What are the consequences of the global occurrence of microplastics? It is good we have designed bioluminescent tools to monitor pollution in aquatic habitats but will pollution of the oceans affect those creatures that rely on bioluminescence for communication?”

Peter J Herring is living proof that a thirst for, and the acquisition of, knowledge is a worthy legacy for any man or woman.

With special thanks to Steven Haddock