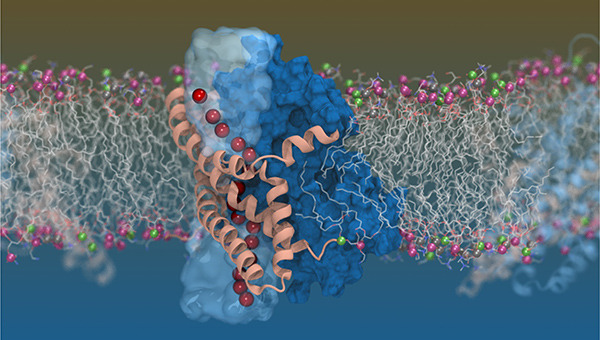 For the first time, researchers have found one of the most important molecular machines in our cells uses a ‘twisting elevator’ mechanism, solving a mystery of how it transports crucial chemical signals from one cell to another.

A University of Sydney-led international team of scientists has revealed the shape of one of the most important molecular machines in our cells – the glutamate transporter – helping to explain how our brain cells communicate with one another.

Glutamate transporters are tiny proteins on the surface of all our cells that shut on and off the chemical signals that have a big role in making sure all cell-to-cell ‘talk’ runs smoothly. They are also involved in nerve signalling, metabolism and learning and memory.

The researchers captured the transporters in exquisite detail using cryogenic electron microscopy (cryo-EM), showing they look like a ‘twisted elevator’ embedded in the cell membrane.

This world-first discovery opens a whole new field of possibility – studying if defects in the transporters could be the reason behind neurological diseases such as Alzheimer’s disease.

The results of the research have been published in Nature.

“The first time I saw the image was amazing. It revealed so much about how this transporter works and explained years of previous research,” says PhD student Ichia Chen who was lead author on the study.

The researchers were able to ‘photograph’ the structure of the glutamate transporter, by analysing thousands of images trapped in a thin layer of ice using cryo-EM, a highly sensitive microscope that made this research possible.

Cryo-EM can make visible what is invisible to the naked eye, using electron beams to photograph biological molecules.

The results also confirm suspicions the researchers had for some time that the glutamate transporters were multi-taskers.

“Using Cryo-EM, we have uncovered for the first time just how these transporters can multitask -  carrying out the dual functions of moving chemicals (like glutamate) across the cell membrane while also allowing water and chloride ions to move through at the same time,” said senior author Professor Renae Ryan from the School of Medical Sciences, Faculty of Medicine and Health.

Image: Individual transporter particles captured by the cryo-EM (left), the structure solved by averaging thousands of these individual particles (middle) and a computer simulation of the glutamate transporter in a lipid membrane revealing the pathway for chloride ions (red) (right; image credit, Shashank Pant, University of Illinois at Urbana-Champaign) Credit: ShashankPant

“These molecular machines use a really cool twisting, elevator-like mechanism to move their cargo across the cell membrane. But they also have an additional function where they can allow water and chloride ions to move across the cell membrane. We have been studying these dual functions for quite some time, but we could never explain how the transporters did this until now. Using a combination of techniques including cryo-EM and computer simulations, we captured this rare state, where we can observe both functions happening at the same time.”

“Understanding how the molecular machines in our cells work enables us to interpret defects in these machines in disease states and also gives us clues as to how we might target these machines with therapeutics,” says Professor Ryan.

Key to bridging the gap in diseases

Mapping out in detail the structure of the glutamate transporter could be a crucial tool for researchers in understanding how our bodies work – and the mechanism behind some diseases.

Defects in the glutamate transporter have been linked to many neurological diseases such as Alzheimer’s disease and stroke.

This includes rare diseases such as episodic ataxia, a disease that impacts movement and causes periodic paralysis, caused by an uncontrolled leak of chloride through the glutamate transporter in brain cells.

“Understanding the glutamate transporter structure, which controls the normal flow of chloride, could help design drugs that can ‘plug up’ the chloride channel in episodic ataxia,” says co-lead author Dr Qianyi Wu.

The paper was the result of seven years of work from researchers in Australia and the United States.

The work also highlights the importance and potential of high-resolution microscopy to understanding biological processes.

“We are really excited to use the new Glacios Cryo-EM at the Sydney Microscopy and Microanalysis facility, University of Sydney. Having access to this microscope ‘in house’ will accelerate our research and our understanding of these important molecular machines,” says Dr Josep Font, co-senior author of the study.