Using 'straintronics' rather than electronics, researchers have produced the tiniest microchips yet by applying what is effectively nano-origami to graphene to create structural functionality. These nanomaterial developments allows more microchips within smaller spaces and could drive improvements in computer and mobile performance speeds and technological miniaturisation. 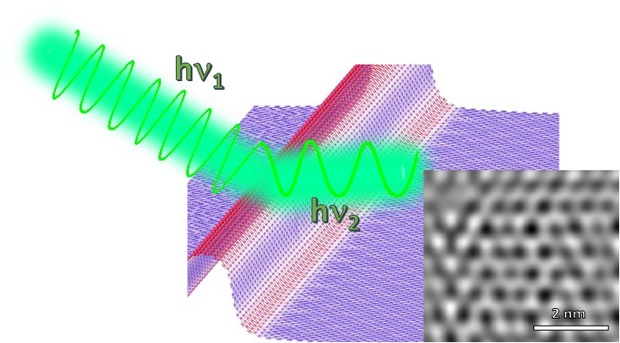 Image: The kink in the form of wrinkles that causes change in Raman signals of altered electronic property

The tiniest microchips yet can be made from graphene and other 2D-materials, using a form of ‘nano-origami’, physicists at the University of Sussex have found.

This is the first time any researchers have done this, and it is covered in a paper published in the ACS Nano journal.

By creating kinks in the structure of graphene, researchers at the University of Sussex have made the nanomaterial behave like a transistor, and have shown that when a strip of graphene is crinkled in this way, it can behave like a microchip, which is around 100 times smaller than conventional microchips.

Image: Laser induced fabrication of graphene kink (blisters) in the form of desired pattern as U S

Prof Alan Dalton in the School of Mathematical and Physics Sciences at the University of Sussex, said:

“We’re mechanically creating kinks in a layer of graphene. It’s a bit like nano-origami.

“This kind of technology – 'straintronics' using nanomaterials as opposed to electronics – allows space for more chips inside any device. Everything we want to do with computers – to speed them up – can be done by crinkling graphene like this.”

Dr Manoj Tripathi, Research Fellow in Nano-structured Materials at the University of Sussex and lead author on the paper, said:

“Instead of having to add foreign materials into a device, we’ve shown we can create structures from graphene and other 2D materials simply by adding deliberate kinks into the structure. By making this sort of corrugation we can create a smart electronic component, like a transistor, or a logic gate."

The development is a greener, more sustainable technology. Because no additional materials need to be added, and because this process works at room temperature rather than high temperature, it uses less energy to create.