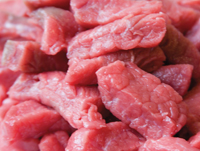 Negative feelings against engineered meat aside, research from the Universities of Oxford and Amsterdam – published in Environmental Science and Technology – hopes to add to the debate on whether it should be produced.

Researchers believe meat grown using tissue engineering could use 7-45% less energy, 78-96% lower greenhouse emissions, 99% lower land use and 82-96% lower water use depending on the type of meat produced.

“What our study found was that the environmental impacts of cultured meat could be substantially lower than those of meat produced in the conventional way,” said Hanna Tuomisto, who led the research.

The researchers based their calculations on a process being developed by co-author Dr Joost Teixeira de Mattos, which uses Cyanobacteria hydrolysate as a nutrient and energy source for growing muscle cells. This sort of tissue engineering is confined to the laboratory, but researchers estimated the cost of producing 1000kg of cultured meat using a scaled up version, compared to the cost of conventionally rearing livestock.

“We are not saying we could, or would necessarily want to, replace conventional meat with its cultured counterpart right now,” said Tuomisto. “However our research shows cultured meat could be part of the solution to feeding the world’s growing population and at the same time cutting emissions and saving both energy and water.”

“Simply put, cultured meat is, potentially, a much more efficient and environmentally-friendly way of putting meat on the table.”

The calculations do not currently take into account additional savings from lower energy costs of transportation and refrigeration of cultured meat compared to conventional meat. They also suggest land freed up from farming could be reforested or used for other carbon sequestration purposes, further lowering the carbon footprint.

“There are obviously many obstacles to overcome before we can say whether cultured meat will become part of our diet, not least of which is whether people would be prepared to eat it!” said Tuomisto. “But we hope our research will add to the debate about whether we could, or should develop a less wasteful alternative to meat from animals.”