When it comes to starting in a new lab, there is one thing that needs to be considered above all others. Take heed as Dr Matthew Partridge warns us to beware the multi-tentacled admin beast

Starting a new job is an exciting, terrifying and exhausting experience. You'll almost certainly have a giant volume of new scientific material to absorb as well as countless names to fail at remembering and fridge etiquette to understand. But before you get to any of those problems you still have to make friends with the tentacle monster.

Admin or, if your feeling fancy, 'administration’ is the sprawling structure around research that ensures that you don't kill your self (health and safety), kill someone else (security), order things that might kill people (purchasing), hire someone that might kill you (human resources) and ­– if you do – it can even make sure that everyone is fine with the growing numbers of dead people (marketing).

Each tentacle of admin is armed with its own particular secretion of rules and paperwork which must be adhered to lest you anger the beast. But while every admin beast is made up of broadly the same tentacles, no beast is the same so you have to re-learn how to survive an encounter every time you change institution. While a well-aimed B60 might tame the HR tentacle at one university, it would simple enrage it at another.

You would think that all tentacle monsters could be trained to be the same but, as anyone that has worked with one for a while will realize, you can't control a giant tentacle admin monster. Not even the head of a company or the chancellor of a university can control a tentacle monster. The monster controls you.

The key to the beast The key with the many tentacled beast is not to fight but to just accept that you will now have to live with its presence. When you start a new job this is often discussed as ‘induction’; you are used to dealing with other tentacle monsters and you now need introducing to this one. Time to accept that you will now be living with its tentacles over everything you do.

This can take days, but don't think of it as a mandatory 3 hours of HR induction or 4 hours of Heath and Safety training – it's simply all tentacle charming. Knowing exactly which form to put in the suckers of which tentacle can be invaluable information for any new starter. It can be difficult, especially if you're used to your previous tentacle admin beast. You may even be tempted to suggest new things the tentacles might prefer. This is a mistake.

Whatever you do don't provoke the many tentacled beast. There are plenty of ways to upset it and they have a long memories and vindictive tendencies. Avoid doing anything that might be viewed as disrespectful like, for example, writing a 650-word blog post comparing them to a tentacle beast in your first week on the job... 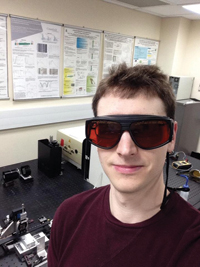 Dr Matthew Partridge is a senior Research Fellow at the Optoelectronics Research Centre at the University of Southampton but describes himself as a biochemist who has accidentally ended up working with optical sensor systems. He also runs an open science blog http://errantscience.com/ aimed at disseminating complex science to a wider audience.[/caption]