Microbial lipoxygenases: a next target against antibiotic resistance?

Russian researchers Georgy Kurakin, Anna Samoukina and Nadezhda Potapova use bioinformatics to uncover the evolutionary roots of microbial lipoxygenase functionality and raise the possibility that these enzymes may be the next target in the fight against antibiotic resistance. 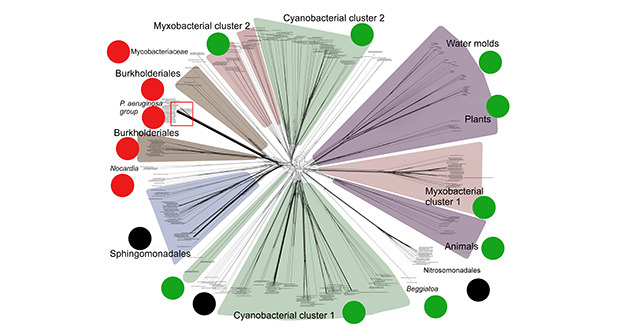 Fig: Evolutionary network of bacterial and eukaryotic lipoxygenases with ecophysiology markers near each cluster: green markers depict multicellular organisms, red ones show opportunistic and nosocomial pathogens, black markers depict unknown functions. It is clearly visible that lipoxygenases are largely associated with multicellularity, but one group of clades has learnt to use them for invasion. The red rectangle depicts a “Pseudomonas aeruginosa group” — a clade with lipoxygenase 'superspreading' by P. aeruginosa. Image credit: Biochemistry (Moscow), amended.

Lipoxygenases are enzymes involved in chemical cell-to-cell signal generation in almost all representatives of multicellular life, but our knowledge about their functions in bacteria and protozoa is scarce. Recent bioinformatics research reveals that lipoxygenases could have evolutionary links with cell-to-cell signalling and be an emerging virulence factor.

Lipoxygenases are enzymes widely distributed in life — in animals, higher plants, algae, fungi and bacteria. Their biochemical functions are the same in these organisms: they convert polyunsaturated fatty acids (PUFAs) into hydroperoxides. In humans and other mammals, subsequent enzymes convert them into leukotrienes, lipoxins, hepoxilins and suchlike compounds. All of them belong to the family of oxylipins and are released by injured cells. They orchestrate inflammatory responses by stimulating it (like leukotrienes) or suppressing it (like lipoxins).

It is difficult to envisage plant lipoxygenases having similar biological functions. In plants, additional enzymes process lipoxygenase-derived hydroperoxides even further than those in animals, so plant oxylipins differ structurally from animal oxylipins. Moreover, plants cannot develop inflammation. Despite these differences, the products of plant lipoxygenases mediate responses to pathogen invasion and herbivory attack. That way, the functionality of plant and human oxylipins seem similar: plants defend with chemicals killing pathogens and poisoning herbivores, while animals defend with leukocytes killing and phagocytizing pathogens — but both reactions are conducted by oxylipins.

Therefore, in all typical multicellular organisms, lipoxygenases are involved in cell-to-cell communication. One might also conclude impressive evolutionary conservation of lipoxygenases if we knew enough about their functions and evolution in bacteria and protozoa. But we do not. A significant knowledge gap lies near the proposed root of the evolutionary tree of life.

Experimental data around the function of microbial lipoxygenases is scarce and too lean to support the theory that they are signalling enzymes or playing detoxifying, oxygen-sensing, or any other role. Bioinformatic methods were needed to provide evidence in this case.

Our team from Tver State Medical University and the Institute for Information Transmission Problems of the Russian Academy of Sciences (Kharkevich Institute) collaborated on exactly this research and have recently published our results in Biochemistry (Moscow). We identified lipoxygenases in protein sequence databases and found associations between their evolutionary and taxonomic clustering, and the ecophysiological traits of those microbes possessing them.

Results revealed that lipoxygenase occurrence appears to be at its maximum in microbial taxa forming primitive multicellular structures. Those microbes with the greatest occurrence were cyanobacteria with a filamentous appearance (like some algae), myxobacteria forming swarms and beautiful fungus-like fruiting bodies, slime moulds doing almost the same, and the mycelial organisms known as oomycetes. This finding implies lipoxygenases are linked to multicellularity at the taxonomic level.

One group of the identified bacterial clades does not fit the picture described above but shows quite different associations. It is as though these ‘evil-doers’ have learnt to use lipoxygenases not for constructive, but for destructive purposes — as virulence factors.

This mechanism has been experimentally demonstrated for a nosocomial pathogen, Pseudomonas aeruginosa — its lipoxygenase initiates synthesis of lipoxins, which, as was mentioned above, dampen inflammation and thus facilitate invasion of the host tissues.

Our study showed that numerous other opportunistic and nosocomial pathogens — i.e. Acinetobacter baumannii, Burkholderia cepacia, Enterobacter cloacae, Cedecea lapagei — could use lipoxygenase this way. Notably, lipoxygenases are transferred very rapidly in the particular subclades of pathogens — like antibiotic resistance genes. Pseudomonas aeruginosa, mentioned above, appeared to be one of such ‘superspreaders’. This provides a final link between our bioinformatic results and experimental works on this bacterium.

Such ‘superspreading’ of possible virulence factors between dangerous antibiotic-resistant bacteria is an important warning sign. As yet, we do not know whether the presence of lipoxygenase is crucial for virulence in these pathogens, but we hope to attract the attention of our scientific and medical colleagues to this enzyme: maybe, it is the next target in fighting antibiotic resistance.

Georgy F Kurakin is a Clinical Resident of the Department of Biochemistry and Laboratory Medicine at Tver State Medical University, Tver, Russia

Anna M Samoukina is Head of the Scientific Department, Associate Professor of the Department of Microbiology, Virology and Immunology at Tver State Medical University, Tver, Russia

Nadezhda A Potapova is a Junior Researcher of Institute for Information Transmission Problems of the Russian Academy of Sciences (Kharkevich Institute), Moscow, Russia