During it's first week on the planet's surface, NASA's Mars 2020 Perseverance rover and its Earthbound team has been carefully test driving all onboard systems. This culminated in a more literal test drive as the rover took it's first short foray across the surface the Martian landscape and delivered further historic footage from its highly sophisticated onboard cameras. Covering 21.3 feet (6.5 meters), the drive lasted 33 minutes and produced images of the rover's own landing area. 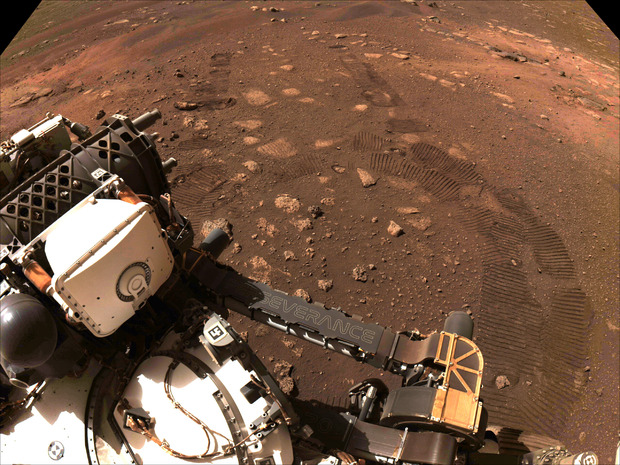 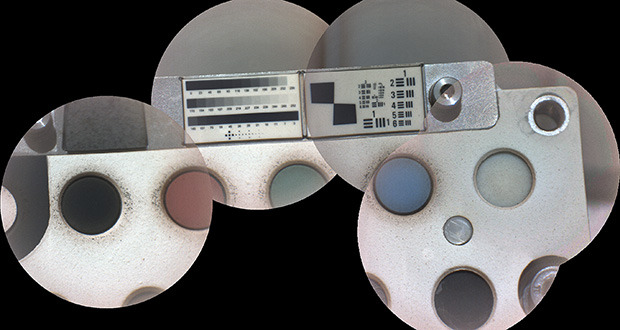 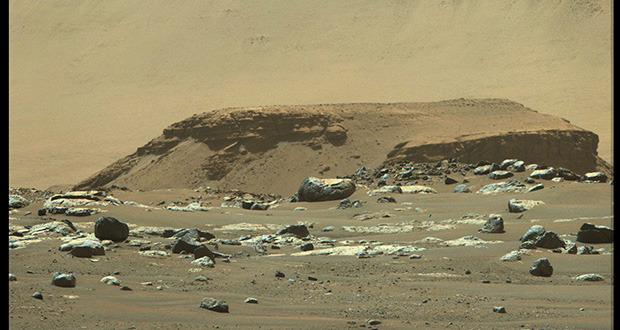 The drive, carried out on 4 March served as a mobility test that marks just one of many milestones as team members check out and calibrate every system, subsystem, and instrument on Perseverance. Once the rover begins pursuing its science goals, regular commutes extending 656 feet (200 meters) or more are expected.

“When it comes to wheeled vehicles on other planets, there are few first-time events that measure up in significance to that of the first drive,” said Anais Zarifian, Mars 2020 Perseverance rover mobility test bed engineer at NASA’s Jet Propulsion Laboratory in Southern California. “This was our first chance to ‘kick the tires’ and take Perseverance out for a spin. The rover’s six-wheel drive responded superbly. We are now confident our drive system is good to go, capable of taking us wherever the science leads us over the next two years.”

The drive, which lasted about 33 minutes, propelled the rover forward 13 feet (4 meters), where it then turned in place 150 degrees to the left and backed up 8 feet (2.5 meters) into its new temporary parking space. To help better understand the dynamics of a retrorocket landing on the Red Planet, engineers used Perseverance’s Navigation and Hazard Avoidance Cameras to image the spot where Perseverance touched down, dispersing Martian dust with plumes from its engines. Image: This image was captured while NASA’s Perseverance rover drove on Mars for the first time on March 4, 2021. One of Perseverance’s Hazard Avoidance Cameras (Hazcams) captured this image as the rover completed a short traverse and turn from its landing site in Jezero Crater. Credit: NASA/JPL-Caltech

The rover’s mobility system is not only thing getting a test drive during this period of initial checkouts. On Feb. 26 – Perseverance’s eighth Martian day, or sol, since landing – mission controllers completed a software update, replacing the computer program that helped land Perseverance with one they will rely on to investigate the planet.

More recently, the controllers checked out Perseverance’s Radar Imager for Mars’ Subsurface Experiment (RIMFAX) and Mars Oxygen In-Situ Resource Utilization Experiment (MOXIE) instruments, and deployed the Mars Environmental Dynamics Analyzer (MEDA) instrument’s two wind sensors, which extend out from the rover’s mast. Another significant milestone occurred on March 2, or sol 12, when engineers unstowed the rover’s 7-foot-long (2-meter-long) robotic arm for the first time, flexing each of its five joints over the course of two hours. Image: Stitched together from five images, this mosaic shows the calibration target for the SuperCam instrument aboard NASA’s Perseverance rover on Mars. The component images were taken by SuperCam’s remote micro-imager (RMI) on March 1, 2, and 4, 2021 (the 11th, 12th, and 13th Martian days, or sols, of Perseverance’s mission on Mars). This calibration target includes visual elements for adjusting the focus of the RMI, and various samples for the calibration of the instrument’s four spectrometers. Credit: NASA/JPL-Caltech/LANL/CNES/CNRS

“Tuesday’s first test of the robotic arm was a big moment for us,” said Robert Hogg, Mars 2020 Perseverance rover deputy mission manager. “That’s the main tool the science team will use to do close-up examination of the geologic features of Jezero Crater, and then we’ll drill and sample the ones they find the most interesting. When we got confirmation of the robotic arm flexing its muscles, including images of it working beautifully after its long trip to Mars – well, it made my day.”

Upcoming events and evaluations include more detailed testing and calibration of science instruments, sending the rover on longer drives, and jettisoning covers that shield both the adaptive caching assembly (part of the rover’s Sample Caching System) and the Ingenuity Mars Helicopter during landing. The experimental flight test program for the Ingenuity Mars Helicopter will also take place during the rover’s commissioning. Image: From its landing site, “Octavia E. Butler Landing,” NASA’s Perseverance rover can see a remnant of a fan-shaped deposit of sediments known as a delta with its Mastcam-Z instrument. Scientists believe this delta is what remains of the confluence between an ancient river and a lake at Mars’ Jezero Crater. The delta remnant is the raised area of dark brown rock in the middle ground this image acquired on Feb. 22, 2021. Credit: NASA/JPL-Caltech/ASU/MSSS

Through it all, the rover is sending down images from the most advanced suite of cameras ever to travel to Mars. The mission’s cameras have already sent about 7,000 images. On Earth, Perseverance’s imagery flows through the powerful Deep Space Network (DSN), managed by NASA’s Space Communications and Navigation (SCaN) program. In space, several Mars orbiters play an equally important role.

“Orbiter support for downlink of data has been a real gamechanger,” said Justin Maki, chief engineer for imaging and the imaging scientist for the Mars 2020 Perseverance rover mission at JPL. “When you see a beautiful image from Jezero, consider that it took a whole team of Martians to get it to you. Every picture from Perseverance is relayed by either the European Space Agency’s Trace Gas Orbiter, or NASA’s MAVEN, Mars Odyssey, or Mars Reconnaissance Orbiter. They are important partners in our explorations and our discoveries.”

The sheer volume of imagery and data already coming down on this mission has been a welcome bounty for Matt Wallace, who recalls waiting anxiously for the first images to trickle in during NASA’s first Mars rover mission, Sojourner, which explored Mars in 1997. On March 3, Wallace became the mission’s new project manager. He replaced John McNamee, who is stepping down as he intended, after helming the project for nearly a decade.

“John has provided unwavering support to me and every member of the project for over a decade,” said Wallace. “He has left his mark on this mission and team, and it has been my privilege to not only call him boss but also my friend.”

With Perseverance departing from its touchdown site, mission team scientists have memorialized the spot, informally naming it for the late science fiction author Octavia E. Butler. The groundbreaking author and Pasadena, California, native was the first African American woman to win both the Hugo Award and Nebula Award, and she was the first science fiction writer honored with a MacArthur Fellowship. The location where Perseverance began its mission on Mars now bears the name “Octavia E. Butler Landing."

Official scientific names for places and objects throughout the solar system – including asteroids, comets, and locations on planets – are designated by the International Astronomical Union. Scientists working with NASA’s Mars rovers have traditionally given unofficial nicknames to various geological features, which they can use as references in scientific papers.

“Butler’s protagonists embody determination and inventiveness, making her a perfect fit for the Perseverance rover mission and its theme of overcoming challenges,” said Kathryn Stack Morgan, deputy project scientist for Perseverance. “Butler inspired and influenced the planetary science community and many beyond, including those typically under-represented in STEM fields.”

“I can think of no better person to mark this historic landing site than Octavia E. Butler, who not only grew up next door to JPL in Pasadena, but she also inspired millions with her visions of a science-based future,” said Thomas Zurbuchen, NASA associate administrator for science. “Her guiding principle, ‘When using science, do so accurately,’ is what the science team at NASA is all about. Her work continues to inspire today’s scientists and engineers across the globe – all in the name of a bolder, more equitable future for all.”

Butler, who died in 2006, authored such notable works as “Kindred,” “Bloodchild,” “Speech Sounds,” “Parable of the Sower,” “Parable of the Talents,” and the “Patternist” series. Her writing explores themes of race, gender, equality, and humanity, and her works are as relevant today as they were when originally written and published.

More About the Mission

A key objective of Perseverance’s mission on Mars is astrobiology, including the search for signs of ancient microbial life. The rover will characterize the planet’s geology and past climate, pave the way for human exploration of the Red Planet, and be the first mission to collect and cache Martian rock and regolith.

Subsequent NASA missions, in cooperation with ESA (European Space Agency), would send spacecraft to Mars to collect these sealed samples from the surface and return them to Earth for in-depth analysis.

The Mars 2020 Perseverance mission is part of NASA’s Moon to Mars exploration approach, which includes Artemis missions to the Moon that will help prepare for human exploration of the Red Planet.

JPL, which is managed for NASA by Caltech in Pasadena, built and manages operations of the Perseverance rover.