Astronomers confirm Farfarout is our most distant object

Farfarout... is a faint little rock only 400km across. Farther out than Farout - in fact, far enough out to take a millenium to orbit the Sun - Farfarout is now officially as far out as you can get in our Solar System. That's so far out man! At least for now... until they find what surely will then become Farfarfarout, or should that be Fartherout? 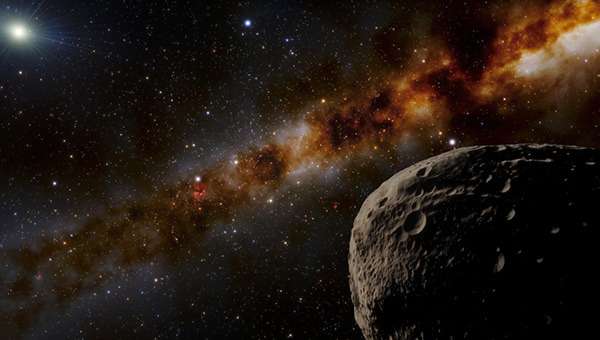 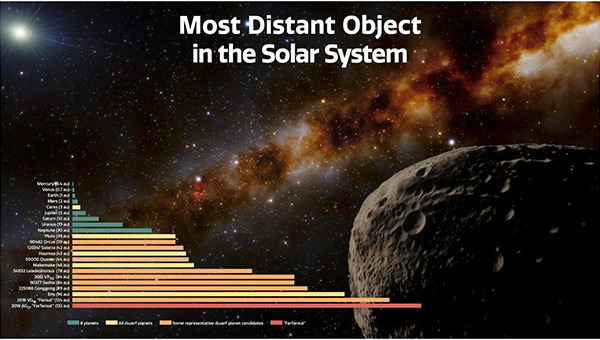 Image: This illustration imagines what the distant object nicknamed "Farfarout" might look like in the outer reaches of our Solar System. The most distant object yet discovered in our Solar System, Farfarout is 132 astronomical units from the Sun, which is 132 times farther from the Sun than Earth is. Estimated to be about 400 kilometers (250 miles) across, Farfarout is shown in the lower right, while the Sun appears in the upper left. The Milky Way stretches diagonally across the background. Credit: NOIRLab/NSF/AURA/J. da Silva

With the help of the international Gemini Observatory, a Program of NSF's NOIRLab, and other ground-based telescopes, astronomers have confirmed that a faint object discovered in 2018 and nicknamed "Farfarout" is indeed the most distant object yet found in our Solar System. The object has just received its designation from the International Astronomical Union.

Farfarout was first spotted in January 2018 by the Subaru Telescope, located on Maunakea in Hawai'i. Its discoverers could tell it was very far away, but they weren't sure exactly how far. They needed more observations.

"At that time we did not know the object's orbit as we only had the Subaru discovery observations over 24 hours, but it takes years of observations to get an object's orbit around the Sun," explained co-discoverer Scott Sheppard of the Carnegie Institution for Science. "All we knew was that the object appeared to be very distant at the time of discovery."

Sheppard and his colleagues, David Tholen of the University of Hawai'i and Chad Trujillo of Northern Arizona University, spent the next few years tracking the object with the Gemini North telescope (also on Maunakea in Hawai'i) and the Carnegie Institution for Science's Magellan Telescopes in Chile to determine its orbit. [1] They have now confirmed that Farfarout currently lies 132 astronomical units (au) from the Sun, which is 132 times farther from the Sun than Earth is. (For comparison, Pluto is 39 au from the Sun, on average.) Image: This illustration depicts the most distant object yet found in our Solar System, nicknamed "Farfarout," in the lower right. Along the bottom, various Solar System objects are plotted according to their distance from the Sun, with the planets and closest dwarf planet (Ceres) appearing at the far left and the most distant Solar System objects known, including Farfarout, on the far right. Their distances are provided in astronomical units (au), with 1 au equal to Earth's average distance from the Sun. Credit: NOIRLab/NSF/AURA/J. da Silva

Farfarout is even more remote than the previous Solar System distance record-holder, which was discovered by the same team and nicknamed "Farout." Provisionally designated 2018 VG18, Farout is 124 au from the Sun.

However, the orbit of Farfarout is quite elongated, taking it 175 au from the Sun at its farthest point and around 27 au at its closest, which is inside the orbit of Neptune. Because its orbit crosses Neptune's, Farfarout could provide insights into the history of the outer Solar System.

"Farfarout was likely thrown into the outer Solar System by getting too close to Neptune in the distant past," said Trujillo. "Farfarout will likely interact with Neptune again in the future since their orbits still intersect."

Farfarout is very faint. Based on its brightness and distance from the Sun, the team estimates it to be about 400 kilometers (250 miles) across, putting it at the low end of possibly being designated a dwarf planet by the International Astronomical Union (IAU).

The IAU's Minor Planet Center in Massachusetts announced today that it has given Farfarout the provisional designation 2018 AG37. The Solar System's most distant known member will receive an official name after more observations are gathered and its orbit becomes even more refined in the coming years.

"Farfarout takes a millennium to go around the Sun once," said Tholen. "Because of this, it moves very slowly across the sky, requiring several years of observations to precisely determine its trajectory."

Farfarout's discoverers are confident that even more distant objects remain to be discovered on the outskirts of the Solar System, and that its distance record might not stand for long.

"The discovery of Farfarout shows our increasing ability to map the outer Solar System and observe farther and farther towards the fringes of our Solar System," said Sheppard. "Only with the advancements in the last few years of large digital cameras on very large telescopes has it been possible to efficiently discover very distant objects like Farfarout. Even though some of these distant objects are quite large -- the size of dwarf planets -- they are very faint because of their extreme distances from the Sun. Farfarout is just the tip of the iceberg of objects in the very distant Solar System."