Do octopuses' arms have a mind of their own?

Often described as aliens, octopuses are one of most unusual creatures on the planet, with three hearts, eight limbs and a keen intelligence. They can open jars, solve puzzles and even escape from their tanks, aided by their eight ultra-flexible and versatile arms. But determining how exactly octopuses control all eight limbs is a puzzle that scientists are still trying to crack. 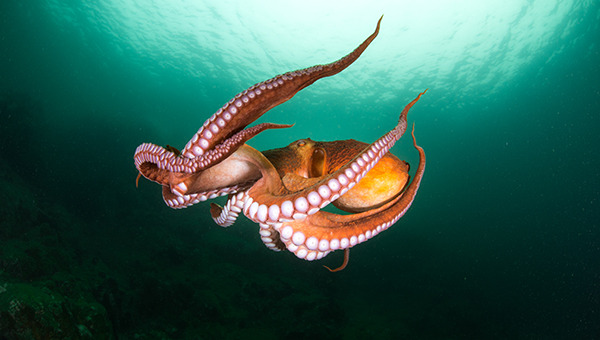 "Octopus arms are completely unique. First off, there are eight of them, each with over 200 suckers that can feel, taste and smell the surroundings. And everything is moveable. The suckers can grasp, and the arms can twist in an almost limitless number of ways," said Dr. Tamar Gutnick, an octopus researcher formerly at the Okinawa Institute of Science and Technology Graduate University (OIST). "So this raises a huge computational issue for the brain and their nervous system has to be organized in a really unusual way to deal with all this information."

Octopuses have an extensive nervous system, with over 500 million neurons, similar in number to that of a dog. But unlike dogs and other vertebrates, where the majority of neurons are in the brain, over two thirds of the octopuses' neurons are located within their arms and body.

With such a strangely-built nervous system, scientists have long suspected that octopuses' arms may have a mind of their own and act autonomously from the central brain. Research has shown that octopuses' arms use reflex loops to create coordinated movements, and some octopuses can even distract predators by discarding limbs that continue to move for long periods of time.

Image: The researchers taught octopuses to insert their arms down the left or right side tubes of Y-shaped mazes. Both sides of the maze were baited with food, but food on the incorrect side was blocked by a net. Here, an octopus correctly picks the right side tube and grabs a food reward. Credit: Dr. Tamar Gutnick

"Some scientists think about octopuses as nine-brained creatures, with one central brain and eight smaller brains in each arm," said Dr Gutnick. But her new research, published in Current Biology, suggests that the arms and the brain are more connected than previously thought.

Dr Gutnick and her colleagues have shown that octopuses are capable of learning to associate inserting a single arm into a specific side of a two-choice maze with receiving a food reward, even when neither the reward nor the arm in the maze are visible to the octopus. But crucially, while the learning process takes place in the central part of the brain, the information needed for the brain to choose the correct path is detected only by the arm in the maze.

Humans have a strong sense of proprioception. Sensory receptors located within skin, joints and muscles provide feedback to the brain, which stores and constantly updates a mental map of our body. Proprioception allows us to walk without looking at our feet and touch a finger to our nose with our eyes closed.

But whether octopuses have the same ability is not yet proven.

"We don't know whether an octopus actually knows where its arm is, or what its arm is doing," said Gutnick. "So our first question was - can the octopus direct its arm, based only on sensing where its arm was, without being able to see it?"

The researchers created a simple Y-shaped opaque maze and trained six common Mediterranean octopuses to associate either the right or left path with a food reward.

Rather than slowly exploring the internal shape of the maze, the octopuses immediately used fast arm movements, pushing or unravelling their arm straight through the side tube into the goal box. If they pushed their arm into the right goal box, they could retrieve the food, but if their arm entered the wrong goal box, the food was blocked by a net and the scientists removed the maze.

Five out the of the six octopuses eventually learned the correct direction to push or unroll their arm through the maze in order to get the food.

"This shows us that the octopuses clearly have some sense of what their arm is doing, because they learn to repeat the movement direction that resulted in a food reward," said Gutnick. "It's unlikely to be to the same extent as humans have with our mental maps and the representations we have of our body in the brain, but there is some sense of self-movement from the arms that is available to the central brain."

The team then explored whether octopuses were able to determine the correct path when using a single arm to sense the texture of the maze.

The researchers presented another six octopuses with a Y-shaped maze where one side tube was rough, and the other side tube was smooth. For each octopus, picking either the rough side or the smooth side of the maze led to a food reward.

After many trials, five out of the six octopuses were able to successfully navigate the maze, regardless of whether the correct texture was located on the left or right side tube, showing that they had learnt which texture was correct for them. This time, the octopuses opted for a slower searching movement inside the maze, first determining a side tube's texture and then deciding whether to continue down that side tube, or to switch sides.

Importantly, the team found that for both types of mazes, once octopuses had learnt the correct association, they could successfully navigate the maze using arms that hadn't been used before. "This further rules out the idea that each arm could be learning the task independently - the learning occurs in the brain and then the information is made available to each arm."

But where this information is stored within the brain, Dr. Gutnick isn't sure, and is a question left for future experiments.

"The brain of octopuses is so different - it's still a black box to us really," she said. "There's so much more to learn."

Read the original paper, 'Use of Peripheral Sensory Information for Central Nervous Control of Arm Movement by Octopus vulgaris' published in Current Biology.