The rod-like spike proteins on the surface of SARS CoV-2 are the tip of the spear of the COVID-19 pandemic. The spikes bind to human cells via the ACE2 receptor and then dramatically change shape, jack-knifing to fuse the cell membrane with the coronavirus's outer membrane and opening the door to coronavirus infection. A study led by Boston Children's Hospital for the first time freeze-frames the spike protein in its ‘before’ and ’after’ shapes. 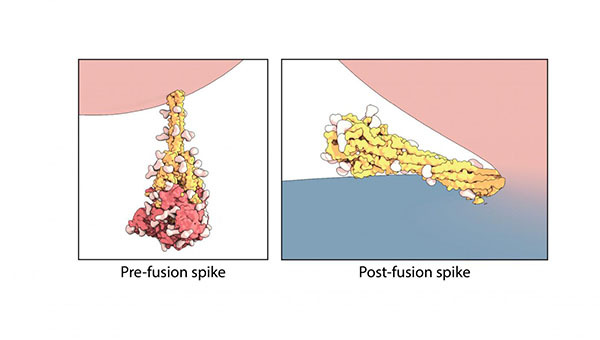 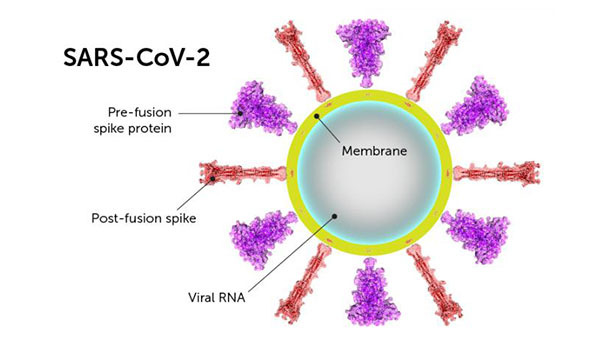 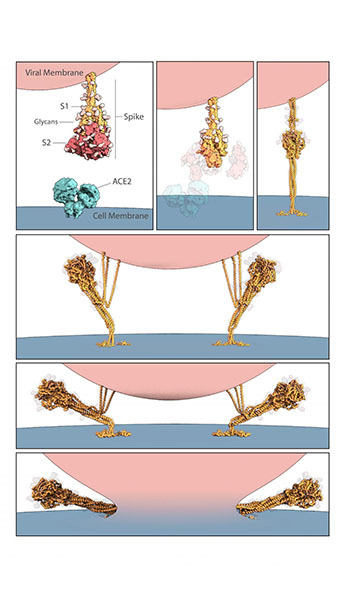 Image: The two alternate shapes of the SARS-CoV-2 spike protein, before and after fusion of the viral and cell membranes. Credit: Image created with Molecular Maya by Jonathan Khao, PhD and Gaël McGill, PhD, Digizyme Inc.

The study, published July 21 in Science, also captured some surprise features of the spike protein, which is also the main protein targeted by our antibodies and the protein used in most vaccines now in human testing. The investigators, led by Bing Chen, PhD, believe the unexpected features may help SARS-CoV-2 hide from the immune system and survive longer in the environment. They may also have implications for vaccine and therapeutic development.

Using the technique of cryogenic electron microscopy, Chen and colleagues in Boston Children's Division of Molecular Medicine established the structure of the spike protein, both before and after fusion of the virus and cell membranes. In the "after," post-fusion state, the protein assumes a rigid hairpin shape folded in on itself, they showed.

Video: An animation of the spike protein's shape change and how it drives fusion of the viral and host-cell membranes

Intriguingly, they also found that the spike protein sometimes goes from its original "before" shape into the "after" form prematurely, without the virus binding to the ACE2 receptor.

"We propose that there are two routes for the conformational changes," says Chen. "One is ACE2 dependent and allows the virus to enter a host cell. The second is ACE2 independent." Image: SARS-CoV-2 can carry both forms of the spike protein on its surface without needing to bind to the ACE2 receptor. Having some spikes assume the post-fusion form prematurely might help protect SARS-CoV-2 from both the environment and our immune system, the researchers speculate. Credit: Cai Y; et al. Science Jul 21, 2020

As a result of the spontaneous shape change, coronavirus particles often bear both forms of the spike protein, with the rigid ‘after’ form protruding slightly more from the virus surface. Chen suggests that being able to assume this alternate shape even without binding to a cell may help keep SARS-CoV-2 viable in the environment, preventing it from breaking down when it lands on a surface for example. That could explain why the virus appears to remain viable on various surfaces for hours to days.

"Most viruses don't survive long outside the host," Chen says. "We think the rigid structure of these post-fusion spikes protects the virus." Image: An artistic rendering of how SARS-CoV-2 fuses its membrane with the host membrane, based on the spike protein structures reported in Science together with other data. Credit: Image created with Molecular Maya by Jonathan Khao, PhD and Gaël McGill, PhD, Digizyme Inc.

The researchers speculate that having some spikes assume the post-fusion form prematurely may also protect SARS-CoV-2 from our immune system, inducing antibodies that are non-neutralizing and ineffective in containing the virus. In effect, the post-fusion spikes may act as decoys that distract the immune system.

The team was also surprised to find that the post-fusion spikes, similar to the pre-fusion spikes, have glycans, or sugar molecules, at evenly spaced locations on their surface. Glycans are another feature that helps the virus avoid immune detection.

Chen believes his team's findings have implications for vaccine development. He notes that current vaccine formulations that use the spike protein to stimulate the immune system may have varying mixes of the pre- and post-fusion forms, and that this may limit their protective efficacy.

"We need to think about how to stabilize the spike protein," he says. "If the protein is not stable, you may be able to induce antibodies, but they will be less effective in terms of blocking the virus. There may be batch-to-batch variation."

Building on experience with HIV

Chen's many years of research on HIV have helped give his team a leg up on studying SARS-CoV-2. Both viruses are what's known as envelope viruses and need to fuse their membranes with those of the cells they're seeking to enter. Both use the same jack-knifing shape change, and both have spike proteins on their surface that are decorated with sugars. Finally, HIV vaccine development is plagued by the challenge of developing neutralizing antibodies -- it, too, distracts the immune system into creating multiple antibodies that do not shut down the virus.

"I think SARS-CoV-2 is probably an easier target than HIV, but we will have to see," says Chen. "If this first round of vaccines does not work well in Phase 3 trials, this new understanding of the spike structure may help us design stronger vaccines."