The human brain built by AI: A transatlantic collaboration

The new German-Canadian lab, HIBALL, aims to create a microscopic 3D map of functional neuroanatomy at the cellular level with the help of high-performance computing and artificial intelligence. The lab was officially kicked off on on June 26 with a virtual satellite event at the annual Organisation of Human Brain Mapping (OHBM) conference. 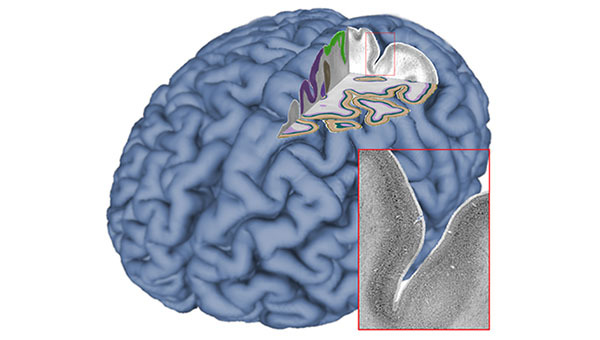 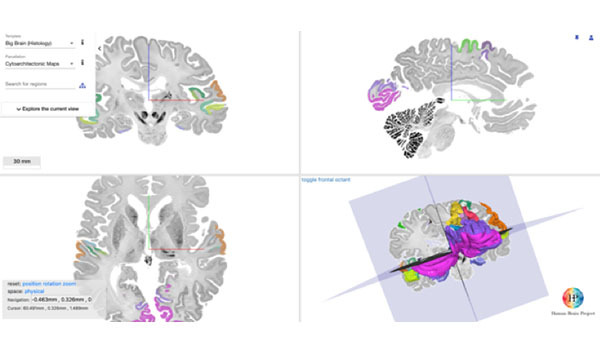 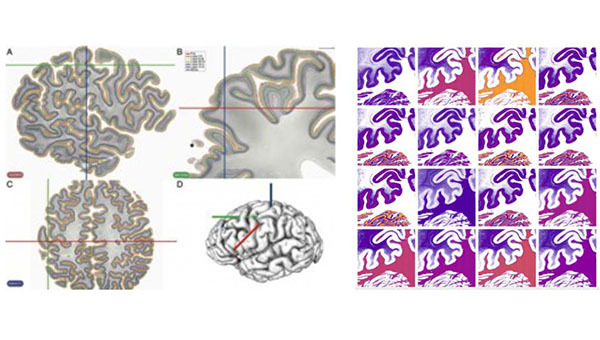 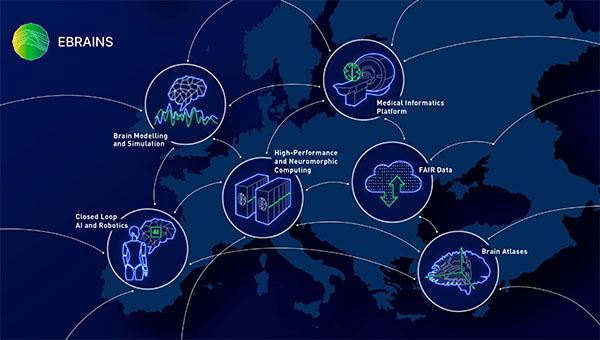 The Helmholtz International BigBrain Analytics and Learning Laboratory (HIBALL) is a collaboration between McGill University and Forschungszentrum Jülich to develop next-generation high-resolution human brain models using cutting-edge Machine- and Deep Learning methods and high-performance computing. The lab targets application of this brain model for neuroimaging, brain-inspired AI research and multi-scale brain simulation. HIBALL is based on the high-resolution BigBrain model first published by the Jülich and McGill teams in 2013. Over the next five years, the lab will be funded with a total of up to 6 million Euro by the German Helmholtz Association, Forschungszentrum Jülich, and Healthy Brains, Healthy Lives at McGill University.

In 2003, when Jülich neuroscientist Katrin Amunts and her Canadian colleague Alan Evans began scanning 7,404 histological sections of a human brain, it was completely unclear whether it would ever be possible to reconstruct this brain on the computer in three dimensions. At that time, there were no technical possibilities to cope with the huge amount of data. The researchers did not get discouraged, however, and tackled it – BigBrain was born. Today, scientists use the 20-micrometer model as a reference brain – the technical foundations have long been laid.

The HIBALL research cooperation is now going one step further and aims to develop a brain model with an accuracy of one micrometre, that is, one thousandth of a millimetre. Several petabytes of neuroscientific data have to be processed – it has still not been resolved exactly how. However, Katrin Amunts and her colleagues are again relying on technical progress. At HIBALL, therefore, disruptive procedures from artificial intelligence (AI) will for the first time take on a major role.

Summarising the project for this article, Katrin Amunts said; "AI plays an increasing role in many fields of neuroscience and beyond. The Human Brain Project (HBP) links research such as done in HIBALL with developments towards personalised medicine in 'The Virtual Brain'. Other researchers implement the brain's mechanisms of signal transduction into neuromorphic chips, or transfer insights from cognitive research to neurorobotics. The convergence of AI and neuroscience is highly beneficial for both sides, and with EBRAINS the Human Brain Project has developed a lasting platform to drive this in Europe."

In a recent interview held by Katja Lüers, Amunts expanded on the collaboration; "The research cooperation takes collaboration to a new level, one that goes beyond the Jülich-Montreal bilateral axis. We now also have partners from AI and supercomputing on board to further develop the BigBrain brain model. Eventually, a reference brain is to be created which will form the basis for many other questions – for example in medicine.

"On the one hand, AI and computing researchers benefit from BigBrain as well as the related knowledge and models of neural networks. On the other hand, we neuroscientists benefit from AI and computing. One thing is clear: we can no longer calculate and analyse the huge amount of data without the modern methods.

"Today, the amount of data in one single image and the complexity of the information are often so enormous that no scientist can analyse them “manually”. Automated and robust methods are needed to process and analyse these large image quantities. In many areas, deep-learning methods are increasingly supplementing classical image analysis methods. We neuroscientists see that artificial neural networks are extremely helpful in recognising certain patterns or in calculating three-dimensional brain models. Due to the artificial neural networks, the tools to solve such methodologically difficult questions have changed considerably in recent years."

The initiative aims at a high level of interoperability with brain initiatives in Canada and Europe, complementing the ongoing work in the HBP and Canadian initiatives in the field of AI and brain health. The scientists draw significantly on HBP-developed infrastructure resources, like the unique functionalities of EBRAINS Multilevel Brain Atlases, and the powerful computing platform FENIX. HIBALL will intensify the collaboration of brain scientists and AI experts to accelerate progress in both fields and furthers international collaboration between the HBP and the global science community and is set to become an official partnering project. Image: Ultra-high -resolution 3D maps of cytoarchitectural areas in the Big Brain model. Users can navigate in the Big Brain, zoom in to get more details, and see how the brain is parcellated. Copyright: Amunts, Schiffer, Dickscheid et al.

Digital 3D atlases of the human brain are basic tools for understanding this organ in its unmatched complexity. Most atlases today offer a resolution in the millimetre range, allowing neuroscientists to study structure-function relationships of areas and large networks. However, they do not incorporate information about thin fibre bundles, cortical layers, columns, microcircuits, or cells. In order to understand brain organisation, spatial scales must be bridged and models at the level of 1 to 20 micrometres have to be developed.

This was started with the BigBrain model, the first human brain model at microscopical resolution. In the European HBP, it became the basis for the most comprehensive atlas of the brain to date, where cellular data are spatially linked with data on other aspects of brain organisation.

HIBALL will establish a common platform for high-throughput computing and data analysis, including databasing, visualization, virtualization and big-data exchange between Jülich and McGill. This will build a lasting, trans-continental research platform that will be closely linked to the HBP infrastructure and available for researchers worldwide. With the advent of the BigBrain - a human post-mortem brain that has been sectioned, stained for cell bodies, scanned at very high resolution, and then digitally reconstructed in 3D (Amunts, Evans et al. 2013), the BigBrain team believe that there will be improvement in the precision and quality of neuroimaging support for qualitative and quantitative investigation of the brain. The group wished to extend this model by further increasing its resolution and integrating multimodal data, working closely with the neuroimaging, brain modelling, and AI communities to unleash its potential for research.

The VirtualBrain (TVB) uses empirical knowledge of brain structure to constrain models that simulate network dynamics, which in turn can be validated with experimental observations of brain function. Complementing related work in the Human Brain Project, the BigBrain team support the development of TVB models with increased spatial resolution and regional heterogeneity by informing them with microscopic resolution data, and evaluating optimised software and hardware environments for the CBRAIN platform.

The BigBrain Project continues to build an open resource and a lively scientific community within a collaborative research and training environment. They share datasets and tools through the platform, with the aim of integrating them with the EBRAINS and CBRAIN ecosystems, and engaging with the BigBrain user and contributor community through open project meetings, workshops, and online services.

More information can be found at: bigbrainproject.org

About the Human Brain Project

The Human Brain Project (HBP) is the largest brain science project in Europe and stands among the biggest research projects ever funded by the European Union. At the interface of neuroscience and information technology, the HBP investigates the brain and its diseases with the help of highly advanced methods from computing, neuroinformatics and artificial intelligence, and in turn drives innovation in fields like brain-inspired computing and neurorobotics. See humanbrainproject.eu

The 10-year Project began in 2013 and involved some 500 scientists at more than 100 universities, teaching hospitals, and research centres across Europe. On 29 June 2020, the Human Brain Project (HBP) announced the start of its final phase as an EU-funded FET Flagship. The European Commission has signed a grant agreement to fund the HBP with 150 million Euros from now until 2023.

Over the next three years, the project will narrow its focus to advance three core scientific areas – brain networks, their role in consciousness, and artificial neural nets – while expanding its innovative EBRAINS infrastructure.

EBRAINS offers the most comprehensive atlas and database on the human brain, directly coupled with powerful computing and simulation tools, to research communities around neuroscience, medicine and technology. Currently transitioning into a sustainable infrastructure, EBRAINS will remain available to the scientific community, as a lasting contribution of the HBP to global scientific progress.

The HBP and EBRAINS will showcase their work and offerings for Science at the FENS Virtual meeting 11-15 July 2020, the largest Neuroscience Conference in Europe, fully digital for the first time: forum2020.fens.org As a lasting contribution to the global science community the HBP has developed EBRAINS, an digital European research infrastructure that allows scientists and technology experts to seamlessly collaborate, accelerating advancements in the fields of neuroscience, computing and brain-related medicine. See ebrains.eu/

Prof. Katrin Amunts is director of the Institute of Neuroscience and Medicine (INM- 1) at Forschungszentrum Jülich in Germany, as well as the C. and O. Vogt Institute of Brain Research at Heinrich-Heine University Düsseldorf. She is the Scientific Research Director of the Human Brain Project. (Photo FZJ/Sascha Kreklau) Email: k.amunts@fz-juelich.de 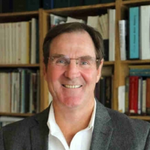 Prof. Alan Evans is a James McGill Professor of Neurology and Neurosurgery, Psychiatry and Biomedical Engineering at McGill University since 2009, and a researcher in the McConnell Brain Imaging Centre (BIC) at The Neuro. He is the first Canadian participant in the Human Brain Project and Scientific Director of McGill’s $84 million CFREF project, “Healthy Brains for Healthy Lives.” (Photo: McGill) Email: alan.evans@mcgill.ca