We’ll drink to that

Dr Leonardo Chiappisi and Dr Isabelle Grillo are fascinated with the popular Italian liquor limoncello and its distinct milky appearance. But how, exactly, could this help them develop speciality chemicals? We took them out for a boozy lunch to find out…

Why were you originally drawn to studying limoncello?
The idea originated from mere curiosity. I usually prepare limoncello at home using the traditional recipe, keeping lemon zests macerating in ethanol for several weeks and then mixing the extract to a sugar/water syrup. The limoncello obtained is turbid, like fog, thus indicating the presence of nanostructures, with a size of some hundreds of nanometers. I asked myself “Does the structure of limoncello change when it passes from the chilled glass to our warm mouth?” I also wondered if the presence of sugar has an effect on its long-term stability. We discovered that the implications of the experiment far exceed the satisfaction of curiosity.

What makes a good quality limoncello?
The cloudy, turbid appearance of the limoncello is due to the presence of essential oil droplets, as demonstrated in our study. The samples prepared for the study contained only 0.2% essential oil, but still exhibited a nice turbidity and excellent smell. The absence of any turbidity is a clear sign that the drink contains very small amounts of essential oil, which gives taste, colour, and flavour to the drink. It is also by far the most expensive component. Accordingly, many industrially-produced, cheaper products contain very little essential oil, and sometimes some colourants. The cloudy appearance is due to the fact that the essential oil droplets scatter light. This is because the size of the oil droplets is comparable to the wavelength of visible light.

Does alcohol level affect the lemon droplets and the drink’s overall flavour?
There is no simple answer to this question – there are many factors affecting the flavour of a drink and we are not food chemists. From a physio-chemical perspective, the activity of the essential oil molecules is expected to go through a maximum, where a mixture of molecularly dissolved oil and oil droplets coexists. This is due to two opposing phenomena. We can taste and smell only molecularly dissolved essential oils, and the oil droplets themselves do not contribute to the taste of limoncello directly. In contrast, the better the solvent for the essential oil, the lower the strength of its smell. I would also doubt than an 80% alcoholic drink is very enjoyable!

Could this be observed in other liqueurs?
This is a very general behavior. A well-known example is the French aperitif, Pastis, known also as Raki in Greece or Sambuca in Italy. When Pastis is served, it is a clear, fully transparent liquid. Upon dilution with water, the essential oil becomes less soluble, and Pastis turns into a turbid liquid, due to the emulsification of the essential oil in the water/ethanol mixture.

At the beginning of the 20th century, the absinthe that inspired several famous painters was based on the same “Ouzo” effect. Back then it was forbidden due to its side-effects on the brain, caused by the presence of thujone, a terperne molecule with a menthol odour. It is very likely that all the perfumes, if diluted with water, would show a milky appearance.

How could your findings help create eco-friendly consumer products?
We all know that oil and water are immiscible, unless surfactant molecules, such as soap, are added. Additional mechanical energy is required to intimately mix the system. Yet, in an Ouzo system, the emulsion forms spontaneously! Emulsions allow us to encapsulate both hydrophilic and hydrophobic molecules, and thus are very important for cleaning, and recovery of certain wastes. However, soap molecules are very difficult to separate and recover, and are a major pollutant. Ouzo systems could replace some cleaning products, without the problem of using surfactant molecules for subsequent water waste treatment.

What other applications could your research have?
These mixtures of three liquids, where two of them are immiscible, are becoming increasingly interesting for various applications. Taking the example of limoncello again, the three liquids are water, ethanol, and the essential oil. Water and ethanol are fully miscible, as are ethanol and the essential oil, but water and the essential oil are not. There are countless combinations of liquids which are only partially miscible that all show the characteristic properties of spontaneous-forming emulsions in a certain composition range. However, the size and stability of the emulsion droplets strongly varies from system to system. Many system phases separate within minutes. Others, like limoncello, are stable for a very long time. The very important aspect of these types of emulsions is that they are formed spontaneously – i.e. with little to no energy input – and that no additional stabiliser is needed, such as polymers or surfactants.

This premise allows us to better envisage a whole range of possible applications of this class of emulsions. Emulsions, where an oil is solubilised in water (or vice versa) are a very common reaction media. For example, let us consider a reaction which takes place in oil, but one of the components is soluble in water. The only way to perform the reaction is to bring all components in close contact – this is mostly done via classical emulsification. When the reaction has completed, the final product needs to be recovered. This is usually the most challenging part of the process, as it needs to be separated from the water, the oil, and above all, the stabiliser! If the reaction was performed in an oil/water/ethanol mixture, the reaction product could be recovered much more easily, as there would be no need to remove the surfactant. In addition, consider that water and ethanol are the two cheapest and greenest solvents available.

Describe the molecular make-up of limoncello
Limoncello is made of essential oils (~ 0.15 vol%), ethanol (~25-35 vol%), sucrose (~10-20 vol%), and water (~ 50 vol%). The ratio of the different components may vary from recipe to recipe. Among the essential oils, limonene is the main component but terpenes (β-pinene, γ-terpinene), sesquiterpenes, ( β-bisabolene) and also oxygenated compounds, such as decanal, and geranial and neral – two isomers of citral – are also present.

In homemade limoncello, the composition of the lemon essential oil, extracted from the citrus flavedo, can vary significantly as a function of the harvest period and the growth location, thus giving different taste to the liquors. Industrial products might be prepared using terpene-less oils or essential oils enriched with citral to avoid or reduce oxidative processes and to enhance the liquor flavor and shelf life.

Why were the solvents in the mixture deuterated?
Rather than adding deuterium to the mixture, we actually have to use deuterated solvents – though the ethanol and the water used are isotopically enriched with deuterium, to prepare the mixtures. The physio-chemical behavior of heavy (deuterated) water and deuterated ethanol are practically identical to that of their classical, non-deuterated counterparts. However, the way the neutron interacts with a hydrogen or deuterium nucleus is very different. This is a very important peculiarity widely exploited in neutron scattering and allows us to selectively highlight certain components of the system. In the case of limoncello, we observed the emulsified droplets, made mainly by the hydrogenated essential oils, dispersed in the continuous medium made of deuterated ethanol and water. 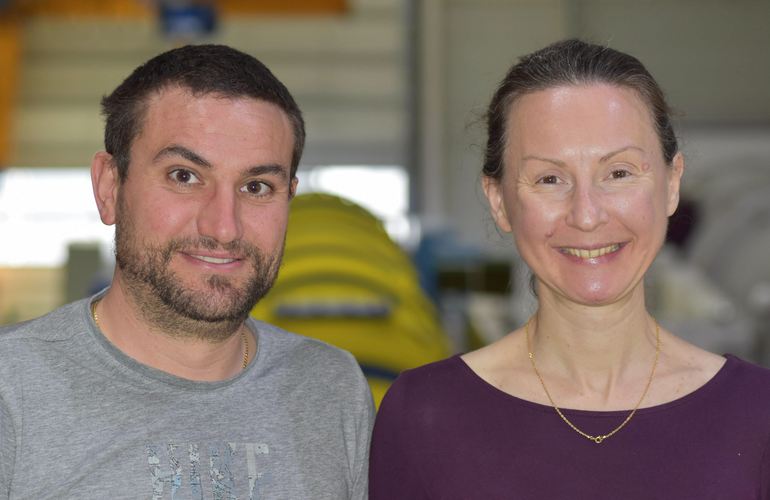 Dr Leonardo Chiappisi and Dr Isabelle Grillo are researchers at the Institut Laue-Langevin in Grenoble, France