If Sherlock Holmes were alive today he’d probably be well-versed in state-of-the- art technologies such as 3D. With his inquisitive brain he’d no doubt appreciate the role forensic 3D- and CAD-supported photogrammetry (FPHG) has in modern day policing; and he’d certainly be impressed by the Zurich City Police’s efforts to help track down murderers and solve cases using the latest 3D technology

If Sherlock Holmes were alive today he’d probably be well-versed in state-of-the- art technologies such as 3D. With his inquisitive brain he’d no doubt appreciate the role forensic 3D- and CAD-supported photogrammetry (FPHG) has in modern day policing; and he’d certainly be impressed by the Zurich City Police’s efforts to help track down murderers and solve cases using the latest 3D technology 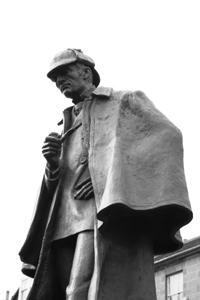 THE Scientific Forensic Service and the Technical Accident Reporting Service of the Zurich City Police work mainly in the canton of Zurich to secure and analyse evidence taken from the scenes of violent crimes, fires, explosions and larger work-based and traffic accidents. To get the complete picture, the laboratory analyses evidence including narcotics, anaesthetics and fire debris.

A special area it deals in is FPHG - a way of documenting and capturing the surface of objects before 3D models of these objects can be created in a virtual space. With the help of these computer-generated images, events such as traffic, plane and other accidents can be reconstructed according to the sequence of how they happened, based on the forensic evidence.

FPHG draws on the conventional photogrammetry that the police use for routine accident and crime scene documentation. Using these techniques for large objects, a study was carried out by the accident reporting service of the Zurich City Police and the legal/medicine institute of the University of Bern. The idea: to develop the photogrammetry procedure to analyse small objects too, by drawing on 3D/CAD programmes (for more information go to www.virtopsy.com). This enables photogrammetrically-captured objects to be turned and viewed from any given angle in a virtual space, meaning that 3D analyses such as truing tests can be carried out without changing the originals in any way, or even requiring these to still exist. The results of FPHG investigations can be examined using reconstructions or experiments, this is how Autodesk’s 3D modelling and animation software is used in the accident and forensic services of the Zurich City Police.

Each traffic accident is unique and poses a new challenge for the emergency services; main priorities include rescuing, extinguishing, recovering and securing the accident scene - but even in this initial intervention phase the investigation of what happened starts by securing the evidence. Often this also involves a reconstruction of the sequence of events - whether to find out who was responsible, the reason for the accident or to prevent another one from happening.

Documentation and measurements of accident-related damages to vehicles

involved form the basis for further investigations, in particular to determine the speed and configuration of the collision. As well as measuring by hand, which is carried out by the Zurich City Police, damages can be captured photogrammetrically (for example using RolleiMetric) or with a 3D laser scanner. For this the accident technology and forensic services of the Zurich City Police use an ATOS scanner from GOM and a laser scanner from Leica to capture the details of the area and 3D objects with the finest precision. The meshed 3D surface models of the ATOS scanners from GOM (www.gom.com) can then be imported into 3ds Max as sdl data. This data is then used as the basis for the modelling in 3ds Max for reconstruction and simulation. To treat the point clouds of the objects scanned with the 3D laser (www.leica-geosystems.com), the Zurich City Police use Leica software, Cyclone.

The comprehensiveness of the 3D laser scanned point clouds is one of the main advantages of this over all other sources of spatial information. The scatter points are mashed together in Geomagic Studio 9.

understanding what really happened,“ said Marcel Braun, head of special measurements for Zurich City Police. “It’s not just about visualising it but about having many different perspectives to hand and being able to test each option.”

Rather than having to act out a crash physically with vehicles and then compare the damage caused at 100 km/h compared to a car travelling at 50km/h, the team can input the data gathered by scanning the vehicles and the accident crime scene and analyse the outcome with virtual hypothetical situations, saving both time and effort.

3D technology isn’t only used to investigate traffic accidents but is also used to explain or visualise plane, train or construction accidents. In line with this, the expectations of the investigation bureaux have increased when it comes to reconstructions and appraisals. Using modern procedures to document a crime scene helps comply with all these requirements. The Zurich City Police have been using Autodesk technology for the past eight years, with the latest version of 3ds Max providing higher quality and less restricted meshing opportunities. The technology is most frequently used to analyse traffic accidents, with a smaller percentage of cases focusing on crime scene investigations.

Forensic science
Using computer-generated representation forensic events and crimes can be reconstructed. This means that different scenarios can be constructed to find out what kind of weapon or tool was used to inflict an injury on the victim. In sensational murder cases, both abroad and in Switzerland, the FPHG procedure has led to hard-hitting results. For example, in one homicide case it showed that the victim wasn’t killed with a hammer, as originally assumed, but with a nut wrench. Other instruments used in murder cases, as demonstrated by the FPHG procedure, threw up an even more bizarre list -  from pliers, a tyre, vehicle body part and shoe sole to the jaw of the suspect! Bite marks actually form about 5% of all cases that are handled and analysed by the Zurich City Police. Being able to virtually reconstruct the dental structure to compare with existing records means that the police in Zurich can save a lot of time that would have been spent in guesswork.

Beyond the entertainment industry the use of 3D software for special effects in TV, cinema and of course for computer and video games, is taken for granted nowadays. But people are also starting to realise that 3D modelling and animation software can also help speed up existing processes, no matter what the industry, in a more efficient and cost-effective manner.

For example few car campaigns rely on real photography or pure film shoots, visualisation is being used more and more frequently. Architects, mechanical and design engineers are using 3D visualisation technology to initially present and then sell their products. What’s more they can realistically simulate training, instruction and maintenance procedures as well as processes within machines.

3D is no longer an expensive toy for very few people. The way it’s being used by the Zurich City Police is just one example of how useful the technology can be in the search for the truth.

Elementary, as Sherlock would say!