The Science of Chocolate

With the news that Cadbury’s is to be taken over by US food giant Kraft, Laboratory News decided to delve into the depths of chocolatey goodness and discover a bit more about one of our favourite foodstuffs

With the news that Cadbury’s is to be taken over by US food giant Kraft, Laboratory News decided to delve into the depths of chocolatey goodness and discover a bit more about one of our favourite foodstuffs 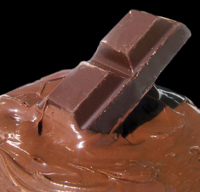 Chocolate has come a long way in its history – from spicy bitter drinks in the ancient Mayan and Aztec civilizations, to the huge slabs filled with caramel or honeycomb we have today – but just how is chocolate made, why do we like it so much and is it really good for us?

The Mayan Indians grew cocoa trees and harvested their beans as far back as 600 AD.  They’d roast the beans and add chilli and other spices to make ‘xocoatl’ or ‘bitter water’ which they drank on special occasions. Over the years chocolate evolved from a spiced drink, to one that was warm and served with milk and it remained this way until the late 19th Century – when chocolate became popular with Kings and Queens in Europe and was made into the bar form we have today.

Cocoa trees – or Theobroma Cacao – grow in warm humid places near the equator. They Mayans used its beans as currency as they were considered to be incredibly valuable. This still rings true today as one tree produces about 1lb of cocoa – each tree sprouts between 20 and 30 large pods from their trunk and branches, each containing between 30 and 40 beans.

Cocoa beans are fermented to enhance their flavour using either the heap or box method. The box method sees around a tonne of beans loaded into a box, which is covered and stored in a building for six to eight days before being dried out. Cadbury’s uses the heap method, where the beans are piled up in a heap and sandwiched between banana leaves. They’re left for five to six days to allow the flavour to develop before being sun-dried. Once in the UK they are washed and roasted, and then - in what sounds like a rather delightful old English folk dance - kibbled and winnowed to reduce the size and get rid of the outer shell1.

In 1866, John Cadbury’s son visited Holland and bought back a van Houten press – a hydraulic press used to squeeze fat from a bean. A similar set-up is still used today: the nibs – or centre of the bean – are ground between steel rollers until they become a chocolate-coloured liquid, over half of which is cocoa butter, the main fatty constituent of chocolate. Half of the cocoa butter is squeezed from the liquid, leaving a solid block which can be ground into cocoa.

The cocoa mass can then be processed to form chocolate.  For dark chocolate, sugar is added, and the mixture is ground and conched – meaning it is rolled and kneaded to form a smooth product. It is then tempered or cooled to a particular temperature to make it stable and stop the cocoa butter rising to the top. We’ve all grabbed a bar of chocolate from the cupboard and ripped it open only to be disappointed when we it’s not quite how we expected – rather than a smooth brown surface, there’s a white marble-effect creeping to the top. This is the cocoa butter rising to the top – a side-effect of storing your treat in the wrong conditions.

If its milk chocolate you’re after then fresh full cream is added to the mixture,

which is then dried before grinding. Up to 5% of vegetable fat can also be added to stabilise the chocolate, which is then conched and tempered. White chocolate is made using cocoa butter, sugar and milk and has no cocoa solids.
Cocoa butter has a melting point of 34 to 38°C. The temperature of the human body is 37°C, which means chocolate melts in the mouth. A study conducted by Dr David Lewis in 2007 showed that melting chocolate in the mouth provided a longer-lasting body and brain ‘buzz’ than a passionate kiss. Dr Lewis said “While we fully expected chocolate – especially dark chocolate – to increase heart rates due to the fact it contains some highly stimulating substances, both the length of this increase together with the powerful effects it had on the mind were something none of us had anticipated.” Could it be that there is some truth in the long-held belief that chocolate is an aphrodisiac?

Whether or not it gets us in the mood, chocolate certainly causes a buzz in the grey matter. Chocolate is a stimulant and contains a variety of substances which affects the body’s chemistry. Scientists at the Neurosciences Institute in San Diego suggest that chocolate contains pharmacologically active substances that produce a cannabis-like effect on the brain – a chemical high, which is why we feel good when we eat it.

Chocolate contains theobromine – a weak stimulant with a similar structure to caffeine – which provides a buzz (and is toxic to animals). It is also used as a vasodilator, a diuretic and heart stimulant. It also contains phenylethylamine, which raises the levels of endorphins – the pleasure-giving substances in the brain, and tryptophan, which the brain uses to make serotonin – a neurotransmitter which can produce feelings of ecstasy.

In 1687, English doctor Sir Hans Sloane was travelling in Jamaica where he tried the local drink – chocolate.  He didn’t like the taste, but thought it tasted much better when he added milk.  He bought the recipe back to England where he sold it as medicine. Turns out maybe he wasn’t too far off the mark – chocolate does have some health benefits.

Dark chocolate is full of antioxidants called flavonoids, and it’s been reported that it has more flavonoids than other antioxidant-rich foodstuffs like red wine. These flavonoids reportedly prevent cancer, protect blood vessels, promote cardic health and counteract mild hypertension2.

Cocoa and dark chocolate contain epicatechin, which is related to the flavonoid family. Studies have shown a reduction in blood pressure and flow-mediated dilation after consuming dark chocolate. Some even believe small, regular amounts of dark chocolate can lower the possibility of a heart attack. However, chocolate alters the blood flow to the brain and releases noradrenaline, which can cause migraines.

Some studies suggest that a specially formulated type of cocoa may be nootropic – or memory enhancing – and may delay brain function decline as people age. Mars Inc has been forking out on flavonol research each year and wants to license drugs based on synthesised cocoa flavanol molecules which could be used to treat diabetes and dementia.

So is chocolate good for us? In short – yes and no! While chocolate has some health benefits, the odds are stacked against it. With 100g of Cadbury’s Dairy Milk containing 30g of fat, if eaten in excess it can contribute to obesity, which is also associated with other health problems such as heart disease and diabetes.

Chocolate is often associated with an increase in acne or as a cause of tooth decay. However, in a 1969 study at the University of Pennsylvania School of Medicine, 65 subjects with moderate acne gorged on chocolate bars with 10 times the amount of chocolate in a typical bar, or identical bars containing no chocolate at all, for four weeks.  None of the subjects had increased signs of acne.  It’s also been shown that cocoa butter may in fact coat the teeth and prevent plaque formation, although the sugar in chocolate can contribute to cavities, but no more than other foods.

As well as making chocolate taste like chocolate, cocoa butter has many uses as an ingredient in pharmaceuticals, ointments and toiletries. It contains natural antioxidants that prevent the fats from decomposing, and has good soothing properties which make it a popular ingredient in moisturisers. Women are advised to use a cocoa-butter-containing moisturiser to prevent stretch marks during pregnancy, although this has not been proven to have a significant effect. The smooth texture and sweet fragrance make it a staple ingredient in cosmetics and skin care products like soap.

So the message is clear – chocolate will make you feel good whoever makes it and whatever type of chocolate it is, but if you want to take full advantage of health benefits, stick to dark chocolate eaten in moderation.