After a recent case of death by spontaneous combustion Brian J Ford proposes a new theory for why a human might suddenly burst into flames The demise of Mr Michael Faherty through fire is a puzzle. According to the West Galway coroner, Dr Kieran McLoughlin, he died through human spontaneous combustion (HSC) and this was officially recorded as the cause of death. Police evidence was presented. Officer Gerard O'Callaghan had been summoned to the house after smoke was seen. He found the remains of Mr Faherty lying on his back in the sitting room. His head was closest to the fireplace, and the body had been extensively damaged by fire. The floor beneath the body was burned; but the rest of the house suffered only smoke damage.

Many scientists have dismissed the phenomenon as a myth. There is only one accepted possible explanation – that of the wick effect, where burning clothes can act as a wick, with melting body fat acting like a candle. A television documentary in 1998 used a dead pig to demonstrate how the effect might occur. Home Office pathologist Professor Michael Green was interviewed, and said that HSC had been debunked. “The way the body burns – the so-called wick effect – seems to me and to my colleagues to be the most scientifically credible hypothesis,” he announced.

In my view, there has to be a sound scientific explanation – the slow-acting wick effect is not enough to account for the many reported cases over several centuries. The most recent case in the UK was that of Jeannie Saffin who burst into fire in front of her family in London in 1982. A relative, Don Carroll, later said how blue flames engulfed her. “She was roaring like a dragon and her cardigan melted,” he claimed. The phenomenon was dismissed at the inquest, though Mr Carroll insisted that his account had been truthful. An American victim of HSC was 92-year-old Dr Irving Bentley of Coudersport, Pennsylvania, who was found destroyed by fire in December 1966. There was a charred hole in the floor beneath the body, but the house was otherwise undamaged.

[caption id="attachment_24962" align="alignright" width="200" caption="This all that remained of Helen Conway, a victim of SHC in 1964. The fire chief who reported on the case said her torso was consumed within 21 minutes, far too short a time for the ‘wick effect’ to have been the explanation"] 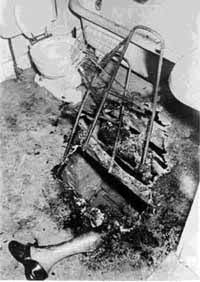 Apart from accounts in newspapers, there are examples in popular fiction. Charles Dickens included one such account in Bleak House, where an eccentric scrap dealer named Mr Krook burst into flames. Russian novelist Nikolai Gogol included an account in his novel entitled Dead Souls where a blacksmith burnt with blue flames.

Explanations are unsatisfactory. The idea that melted fat can burn on clothing like wax on a candle-wick doesn’t fit the reports – it would take ten or twelve hours to burn away, whereas victims are observed to burst into fire. Physiological explanations have been offered, in which mitochondrial energy release switches into overdrive in some unspecified manner. Victims have said to have been near a fire, or drinking spirits which might have caught alight; the body can emit traces of methane (notably from the intestines) and some suggestions have been made that cosmic particles could trigger the reaction. It has even been argued that ball lightning could be the cause.

The reported cases support my proposal perfectly. Many of the victims have high levels of body fat, which provide the fuel depot and the likelihood of ketosis

Let me advance a better explanation. The cue comes from the coroner’s account of Michael Faherty, who reported that the dead man had been diabetic. Many of the victims of SGC have been obese, and obesity can trigger Type 2 diabetes. The disordered metabolism results in ketone bodies, like acetone; indeed the tell-tale odour on the breath is often indicative of the disorder. Parents have been advised for years to suspect their children of glue-sniffing if solvents can be detected on the breath – and I hate to think how many families have had their lives ruined through a failure to recognise that the body can naturally produce acetone. It is a highly inflammable gas: as little as 2.6% in air can explode and its flashpoint is -17.8oC. It can also cause flashback, where a trail of methane can lead ignition back to the source. Acetone is miscible with lipids and could surely render body fat – itself combustible – into a highly inflammable compound.

In my view, this offers the perfect explanation. A patient experiences ketosis; acetone and its allies form a reserve in the fatty tissues of the body and collect in gaseous form under the clothing; the patient is thus potentially inflammable. A static spark from fabric or combing the hair could set off fierce combustion. The energy required to trigger an explosion of gaseous hydrocarbons is as little as 0.02 mJ, which falls below the threshold of human perception, whereas static sparks from clothing can produce a painful jolt.

The reported cases support my proposal perfectly. Many of the victims have high levels of body fat, which provide the fuel depot and the likelihood of ketosis. The relatively fat-free extremities often survive the conflagration relatively intact, likewise the heart and intestines. The areas that are consumed are centred on the abdomen, which is where primary fat deposits accumulate. And – in an era before static sparks from synthetic fibres – acetone-rich fat could likely spontaneously combust. The auto-ignition temperature of acetone is only 465°C.

This is a proposal that should now be investigated. Meanwhile, what should you do if experiencing ketosis? I’d advise you to wear loose clothing. Avoid wearing artificial fibres – and don’t smoke.