What does it take to remain the world's highest ranked medical research facility? More than £125m will have been invested by Oxford University by 2013 in a series of buildings designed to transform its appeal and enhance its performance in the competition for talent, new findings, funding and of course, prestige.

“The University of Oxford is keen to make the city the foremost centre for medical research and healthcare innovation internationally,” says Professor William James, Pro Vice Chancellor for planning and resources.

“It's a very expensive business. Scientific research laboratories have a more limited life span than other buildings because the specific demands change enormously with time. We have this issue across our portfolio of buildings,” says James. “And image is a key part of our functionality.”

“Everybody in Oxford understands why it is one of the best places in the world to work, but not everyone outside the UK understands that, so potential top researchers and scientists need convincing at a visual/visceral level. We need to get people to think 'I can see myself working there'.”

Image has been a big factor in filling professorial posts recently, says James. “It really m

akes a difference in recruitment and retention of staff. The perfect building is not enough to deliver good science, but it sure makes it easier.”

James is referring to the beneficial effects of two major buildings completed to date: the new 14,000 sq m Old Road Campus Research building – which accommodates six research institutes – and the 4,500 sq m Oxford Molecular Pathology Institute which has been added to the Sir William Dunn School of Pathology. Two more new buildings are now being constructed on the Old Road Campus. One for the Kennedy Institute of Rheumatology which has been tempted away from Imperial College, and the other for the Nuffield Department of Medicine's Target Discovery Institute.

Together these buildings offer a range of cutting-edge research labs and are designed to encourage collaborations between individuals and institutes, projecting a contemporary, exciting image and offering “buzzy” working atmospheres.

“The greatest unmet need in medical research now lies, we believe, in the area of chronic diseases, caused by excessive inflammation, degeneration, or cellular growth – often associated with an ageing population. Our vision is to build a concentrated focus on understanding these diseases, identifying therapeutic strategies and taking them right through to the clinic,” says James.

This chimes with David Willetts' comments in December, who spoke of the need for a “very clear route” from the research lab to the NHS patient, more early clinical trials, and the governmental role in the joining up of the health service and the life science's industry.

The Kennedy Institute's move to Oxford is evidence, James thinks, of the “unparalleled” environment for medical research, and specifically the proximity of the country's leading orthopaedic hospital and the centres of immunological, epidemiological and genetic research in the Old Road Campus Research building.

The Nuffield Department of Medicine's new laboratory, the Target Discovery Institute, he hopes, will turn out to “overcome many of the road-blocks that lie in the way of development of new treatments for chronic diseases”. 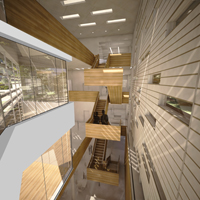 “By bringing together under one roof scientists from a wide range of disciplines, they aim to turn the information gleaned in the neighbouring laboratories....into tools for developing drugs for incurable conditions.”

Close links with Oxford's hospitals will help rapid clinical translation of findings, and incubate the capacity to take therapeutic developments out to the market, through “spin-outs” and industry collaborations. One consequence for Oxford and the UK should be the long-term growth of local hi-tech companies, creating jobs and sustaining the local economy.

The collaboration could be characterised as Make working from the outside in and Nightingale from the inside out, combining their respective skills. Such collaborations are uncommon in architecture and reflect Oxford's determination to achieve excellence.

The largest of the four buildings, the Old Road Campus Research Building was the first to be completed. Like an office building, its form is a simple shell which maximises the amount of space on site. Within this shell, a triple-zone concept for the floor plan has been inserted. It accommodates six institutes from the Oxford campus – an idea for a flexible laboratory that was the original vision of Canadian immunologist, Professor Sir John Bell, president of the Academy of Medical Sciences and Oxford's Regius Chair of Medicine. The zoning idea – which is new to science buildings – adds value by creating space that is more flexible and economic.

The zones accommodate offices towards the front of the building, flexible lab/write up sp

ace across the centre of the plan, with pure lab space to the rear, reflecting respective requirements for daylighting.

The Old Road Research building and its new siblings are configured on a 6.6m grid, slightly larger than the standard office grid. Gainer claims the grid and the way the building is serviced will “cope with most of the things science can throw at it”.

“The building was an outcome of blending the knowledge of Nightingale Associates at the bench, equipment and grid level with Make’s experience of maximising space utilisation on tight urban sites,” says Make Architect’s Justin Nicholls.

It is expensive to accommodate cheaper-to-build office space in laboratories, so the building's zoning allows a more economic approach to create flexible “shirt sleeve” workspace of different types, with maximum specification limited to whitecoat/bluecoat lab areas. This and other passive measures, like the use of natural daylighting and ventilation, also has a beneficial effect on energy consumption, an increasingly important factor for occupiers. Each occupier is charged rent and for services according to the space it uses, like an office occupier.

The proximity of the six institutes to each other encourages the exchange of ideas. “Across the campus, the University's estates department has been bringing more of the developer's mentality to its buildings seeking efficiency, future-proofing, and balancing the short term goals of the academics with a longer term estate management strategy,” says Nicholls. “The four buildings are also designed to create much closer working environment between academia and clinical research.” 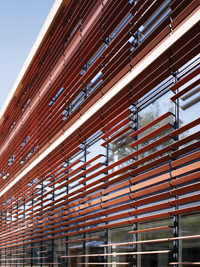 Occupants can move freely around the building, subject to laboratory safety protocols. The mass of the building is broken up by two glazed atria which function a bit like a “street” or quad in older spaces. These unifying features and other common areas ensure no one department can take “ownership” of part of the building.

A common entrance is signified externally by an extruded red canopy. While the initial occupation was “politically fraught”, the design does not go out of its way to force interaction and the flexible co-existence arrangement seems to be working.

Both atria run across the plan. Visitors and occupiers can see directly into the labs and from them into the atria, linked vertically by a dramatic sculptural stair in exposed concrete. The building is not hermetic like traditional labs, more like a modern office building. Shared facilities include common entrance area, waste, stores, autoclaves, gas, admin, reception, prototype workshop, specialist equipment and meeting rooms and breakout areas, and a shared digital library with access to the University's books which are stored remotely at a depository Swindon and can be delivered within 24 hours.

The building's “camouflage” exterior is a striking patchwork of variegated green panelling, more or less solid according to orientation, to maximise daylight, minimise solar gain, and to visually blend in the building with the science park campus and surrounding leafy suburbs and reducing the building's apparent bulk while affirming its unified character.

The new Oxford Molecular Pathology Institute (OMPI), recently completed, is a substantial addition to the existing distinguished and historic red brick Dunn School of Pathology, closer to the centre of town, where greater contextual and architectural sensitivities came into play.

In functional terms, it is essentially one wing of the Old Road building grafted onto the historic Dunn School, blended into the collegiate setting. Floor plans in OMPI feature only two zones – office and laboratory. Write-up space is incorporated within the lab. OMPI prefers this arrangement as being more conducive to a creative working atmosphere – a subject of some debate on the campuses.

Two more new buildings have started on site at the Old Road campus. The Nuffield Department of Medicine's Target Discovery Institute will be distinguished by its triangular “prow” which accommodates the main public areas of the building and its vertical circulation behind which sits the bulk of its oblong plan. This will be divided into three zones, shirtsleeve, primary and secondary labs, running longitudinally through the building. Lighter office spaces occupy the building's southern elevation, with primary labs in the building's heart and secondary labs on the northern elevation.

The Kennedy Institute's building will have a distinctive black and white external character and tri-partite interlocking zoned floorplans that again place offices and primary labs in perimeter locations maximising natural light, with secondary labs and other spaces to the western end and centre of the plan. Its ground floor features a main entrance/atrium area, lecture and seminar space, and loading bay/plant space to the rear. These buildings should be finished in spring 2013.

Collectively Oxford's new medical science labs present the story of how global competition to maintain academic pre-eminence is being played out in one of the UK's most historic cities and academic institutions. The issues for future laboratory development they illustrate include the need to accommodate change defined by design, how cost-in-use and environmental performance can be optimised by passive and active means, the continuing impact of rapidly evolving IT, the imperative of cross-disciplinary working, and the importance of satisfying visual and working environment aspirations on an international basis.

But what of the next generation of The University of Oxford’s buildings after these? As James points out: “We have enjoyed a period of large capital investment being available, which for a while at least has ‘gone away’.” The next five years, he says will be about ‘careful refurbishments’ and the consideration of rarer new and perhaps more modest buildings that must ‘solve multi-disciplinary needs’. What hasn't gone away though is the imperative for research labs to address people's needs intensified by rapidly changing demographies. Innovative building design is seen by Oxford as a vital part of the solution.