Exploring the world under our feet with Paul Younger

Paul Younger has photographed some of the most exceptional rocks on the planet – including some of the very oldest in Europe – to help unravel some of the fundamental mysteries concerning the otherwise-unobservable processes occurring many kilometres below volcanoes.

We speak to Paul to find out about what injuries he’s sustained on his fieldwork, and the Science Central Borehole Project at Newcastle University.

Tell us what these amazing images are of?

There are photomicrographs of rocks representing some of the most inaccessible – and yet also most dynamic – places on our planet. They are mainly of rocks formed in magma chambers deep beneath ancient volcanoes. Most of the samples are from remote and beautiful corners of Britain, and collecting them required determined “Indiana Jones” fieldwork – by sea; on steep hillsides; and thrashing through dense undergrowth. On one occasion I ended up bleeding profusely from both legs – all in the name of science! Once collected, the rock samples were trimmed with a diamond saw and then carefully polished to no more than 30 microns thick. They were photographed with a digital camera fixed to a polarising microscope.

To the naked eye these rocks are often rather unremarkable: they tend to be dull grey, black or – at their most attractive – very dark green in colour. But under the microscope they burst into a swirl of Newton’s Colours, and tell amazing stories about the otherwise unobservable places where they formed. 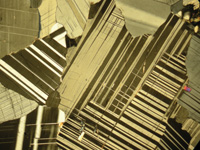 And for all I’ve been using these thin sections for research and learning purposes for 30 years now, they’ve never lost their fundamental attraction to me: their stunning beauty, with geometries and colours you never see in the ordinary world of everyday nature. And yet these are all natural – they are not false colour images such as we frequently see in satellite imagery, for instance. Apart from preparing the samples for microscopic examination, and choosing which particular views to photograph, the beauty of these images is utterly natural, without artifice. The bright reds and greens in these images are usually olivine crystals (though pyroxenes, hornblende and muscovite display similar colours in some of the photomicrographs); the striking black and white stripes are always feldspars. The intimate interdigitation of the separate blebs of colour records complex processes of growth of different minerals at different speeds, as the molten rock gradually cooled, moved, and cooled further.

What can these rocks tell us about the Earth and what’s going on under out feet?

For geologists, these rocks help us to unravel some fundamental mysteries concerning the otherwise unobservable processes that occur deep below our feet. There isn’t – and there never will be – a way to observe these processes directly, but when we look at these rocks under the microscope we can reconstruct what must have gone on from the shapes and composition of the minerals.

These types of rock are not very common in most of the world, and this is also true of Britain. Most mafic rocks formed deep beneath volcanoes, so a good way to find mafic rocks is to look amongst the deeply eroded remains of long-extinct volcanoes. I visited the remains of old volcanoes in Britain which range in age from 25 million to 2500 million years old. The older ones are amongst the most ancient rocks in Europe, and we know very little about the volcanic activity that gave rise to them. Beauty has been locked in these rocks since the Earth was very young.

The younger mafic rocks are often found in situations where we can still see enough to reconstruct the size, shape and history of the ancient volcanic eruptions.  Even these more recent eruptions were never witnessed by human eyes – we didn’t show up until 23 million years later. Even if we had been there, we could never have seen what was going on deep underground where the mafic rocks were forming – in fact we won’t ever be able to do that: it is far easier to travel into space than it ever will be to visit an active magma chamber! 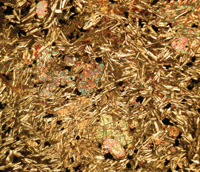 You’re also involved in the Science Central Borehole project at Newcastle University (a sustainability project on the site of the former Newcastle Brewery) – what do you do there?

From February to July 2011 we drilled a borehole to a depth of 1,821m in search of geothermal energy, which we hope to use to provide all the heating that will be needed in a large complex of new laboratories, offices and sustainable houses.  Most of the rocks we drilled through were sedimentary rocks, including the entire sequence of coal-bearing strata formerly exploited by the once-famous mines of Newcastle. We did penetrate three leaves of the Great Whin Sill – a mafic rock which forms some of the most striking crags in the wild uplands of Northumbria, including those on which Hadrian’s Wall famously stands. We are currently in the process of testing and analysing exactly what lurks down the borehole. The main thing to report so far is that the temperature down there is even higher than we’d hoped: the temperature gradient we’re recording is almost 4°C/100m – which means we’re looking at a temperature of almost 80°C at the bottom of the borehole, which is just phenomenal.

Of course the temperature increases with depth wherever you drill, but in much of the UK, the rate of increase would be little more than half of the value we’ve found. This would be predominantly due to conduction of heat from the semi-molten mantle many kilometres down – in the sort of hot and pressured zones where the rocks shown in the photomicrographs would be found, in fact. The extra element of heat found in our borehole is ultimately coming from gentle, natural radioactive decay in a deeply-buried granite, which we previously drilled into about eight years ago in the North Pennines. As far as we can tell, the nearest the granite comes to central Newcastle is about 8km from our borehole. Thus heat from the granite is likely to be moving towards Newcastle along a large system of faults and deeply-buried beds of sandstone. With a fantastic geothermal gradient like this, we have every encouragement to get back in there as soon as possible and that the next steps towards harnessing this increasingly exciting resource.

You’re Director of the Newcastle Institute for Research on Sustainability – what does this involve?

When I’m not engaged in my personal research, my job entails coordinating research from throughout Newcastle University on a wide range of sustainability topics. About 600 scientists at Newcastle are working on projects addressing various facets of the challenge of sustainability, for which our working definition is “Enough, for all, forever”. When we say “for all”, by the way, we mean all life forms on our planet, not just humans. But you can tell from our definition that sustainability is not only about the science and engineering issues (we focus on water, transport, energy, food, and marine science and technology) but also depends on addressing thorny problems of justice and governance, human health, and how best to organise our urban and rural environments.

When I’m not meeting with colleagues to plan proposals or publications, I spend much of my time liaising with external partners, in our region and worldwide, to ensure that the research we do is defined in collaboration with those who grapple with the issues day-to-day in real management situations.  This means I have to spend a lot of time giving talks on a wide variety of stages (from London to Amazonia), and engaging in detailed discussions and negotiations with decision-formers in the UK government, the EU and the UN. It’s a very busy job, but never remotely boring, not for an instant.  And it’s easy to keep motivated when the issues we are addressing are so vital to the future of our planet and our society.