Fred Turner, an undergraduate studying biochemistry at the University of Oxford was recently listed in the 100 leading practising scientists – we find out why. You’ve just been listed in the 100 leading UK practising scientists – a great achievement. How does it feel to be the only undergraduate – and youngest – on the list? It’s a very strange feeling seeing my name on the list next to the names of so many amazing scientists and I can’t quite believe that I’ve been considered good enough to make such a prestigious list! Could you tell us a bit about how you got the nomination. The project that led to my nomination was building a PCR machine and other equipment for a home genetics lab. It started probably about two years ago now when I was 16 and started to get interested in genetics but the problem at the time was I couldn’t easily get into a properly equipped lab to work on projects and obviously as a 16/17 year old I couldn’t afford the equipment required, so I decided to try and build it. One of the main pieces of equipment required for any kind of work with DNA is a PCR machine which basically copies DNA, billions of times in just a few hours. This allows you to go from the small amount of DNA in a sample to having enough DNA to work with and also allows you to amplify a specific region of DNA, usually containing the gene you are interested in. Building the PCR machine took quite a lot longer that I was expecting (about nine months in total) as in order to keep the cost down I had to do everything from scratch but in the end I built the machine for around £250 whereas commercial machines are usually about £3000.  I then set up a basic lab in my cellar with a couple of other pieces of equipment I’d built or managed to get hold of cheap alternatives for. I used the lab to investigate several genes in me and my family including the ginger gene (as my brother has a larger ginger afro) and links between mitochondrial mutations and aging. [caption id="attachment_37671" align="alignright" width="200"] 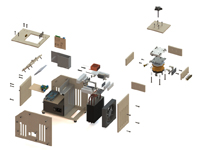 An exploded view of Fred's homemade PCR machine[/caption] And this is the project for which you won last year’s Young Engineer of the Year award; did you ever think it would win you these accolades? Yes I entered this project in the National Science + Engineering competition last year but I didn’t expect everything that has happened because of it and I definitely didn’t have the competition in mind when I started the project, I built the lab because I wanted the equipment I needed to do the experiments I wanted to run. Funnily enough I actually almost didn’t enter the competition and I submitted my project 30 minutes before the deadline, I can safely say I’m glad I did! You’re currently studying biochemistry at the University of Oxford – how’s that going, and what are your plans for after graduation? The course at Oxford is certainly pretty intense and they like to keep us very busy but I’ve still be finding time to work on a couple of projects like the PCR machine, in my spare time. It’s still a number of years until I graduate but at the moment I’m pretty set on not doing any further study as I want to work in industry, my dream is to own a biotech business and use that to fund research. Who is your scientific inspiration? My biggest scientific inspiration is probably Craig Venter and it was after reading his autobiography about his work on the human genome project that I got really interested in wanting to be able to read and understand my own genome and ultimately lead to the building my PCR machine and the lab. More on the engineering side of things I find the work of Elon Musk at SpaceX and Tesla Motors really inspiring. What’s the best piece of advice you’ve been given, and how have you applied that to your scientific career so far? I always remember back when I was at primary school my head teacher would read us a poem that’s always stuck with me, which went something like: “If you think you are beaten, you are If you think you dare not, you don’t If you like to win but think you can’t It’s almost certain that you won’t. Life’s battles don’t always go To the strongest women or man, But sooner or later, Those who win, are those who think they can.” I think in science it’s very important to think big, to stick at it and to always persevere when it’s not quite going to plan!