With a list of characteristics and applications long enough to make most bioengineers take notice, ultrashort peptide hydrogels are fast becoming the toast of biomedicine. Here, a team from Institute of Bioengineering and Nanotechnology tell us about their work on these little miracles…

With a list of characteristics and applications long enough to make most bioengineers take notice, ultrashort peptide hydrogels are fast becoming the toast of biomedicine. Here, a team from the Institute of Bioengineering and Nanotechnology tell us about their work on these little miracles…

Uncertainties over the long-term effects of artificial materials on the human body has encouraged researchers to work relentlessly in developing natural materials for biomedical applications. Among the vast range of natural building block materials, peptides are highly promising candidates. This can be credited to technologies such as solid- and fluid-phase peptide synthesis, native chemical ligation, as well as synthetic biology technologies, all of which permit the facile synthesis of peptides. Nonetheless, the large-scale economical production of peptide-based biomaterials remains a challenge. The bottleneck lies in the purification stage, whereby desired peptides are isolated from their shorter constituents.

Recent discoveries in our laboratory have unravelled a class of ultrashort peptides that have an innate tendency to self-assemble in water or other aqueous solutions such as phosphate-buffered saline into hydrogels1. Compared to other classes of self-assembling peptides used as biomaterials, these peptides are significantly shorter. Remarkably, hydrogels made from these peptides display scaffold topographies that are similar to those found in collagen-based extracellular matrix (ECM). This structural similarity fuelled our interest in evaluating their potential for biomedical applications, where ECM-like structures are crucial and in demand.

The class of ultrashort self-assembling peptides we have been working with comprise aliphatic amino acid residues (e.g. leucine, isoleucine, valine, alanine, glycine) arranged in the order of decreasing hydrophobicity toward the C-terminus (see Figure 1). This sequence is then terminated at the C-terminus by a polar amino acid residue (e.g. aspartic acid, glutamic acid, serine, lysine). Dissolving these peptides in water leads to the formation of hydrogels, with gelation rates varying from a few seconds to several hours, depending on peptide concentration and sequence. The introduction of additional energy through heating, vortex mixing or sonication accelerates the rate of hydrogelation.

Through field emission scanning electron microscopy (FESEM), freeze-dried peptide samples display extensive nanofibrous networks. The presence of these nanofibrillar networks was further confirmed through X-ray microdiffraction1. Additionally, data from circular dichroism spectroscopy suggested the capability of the ultrashort peptides to self-assemble into ?-helix intermediates through the formation of dimers and multimers. Molecular dynamics studies confirmed the hypothesis that the intermediates stacked on top of each other through antiparallel pairing form fibres, which eventually condensed into fibrils with cross-? peptide structures, by X-ray diffraction. Formation of the cross-? peptide structures is evidently favourable, as observed through their enhanced structural stabilisation upon heat treatment (from 25°C to 90°C and back to 90°C).

Interestingly, molecular dynamics simulations confirmed the proposed mechanism of action, as it was revealed that peptides pair up in an antiparallel manner1, 2 and self-assemble into nanofibres that are capable of entrapping up to 99.9% by mass of water form hydrogels.

The peptide scaffold and the high water content present in the ultrashort peptide hydrogels are useful biomaterial properties for applications in tissue engineering. Ideally, the biomaterial should also support new tissue growth and be gradually displaced by ECM secreted from these new tissues. Further, their suitability for tissue engineering depends on several additional criteria, including: • cytocompatibility with mammalian cells • ability to tune the viscoelastic behaviour for various in vivo applications • resemblance of nanofibrillar topography with specific components of the natural extracellular matrix, such as collagen fibres, encouraging cellular proliferation and organization • sufficient porosity of the peptide hydrogel nanostructures to facilitate oxygen transport and nutrient transfer to proliferating cells • optimal mechanical stiffness and flexibility to resist pressure exerted by surrounding tissues • high thermal stability to withstand elevated temperatures during the sterilization of biomaterials prior to in vivo applications

Hydrogels from this class of ultrashort self-assembling peptides fulfil all of the above-mentioned properties, rendering them attractive substrate candidates for tissue engineering3, 4. A subclass of lysine-containing peptides demonstrated salt-enhanced gelation and structural rigidity in the presence of physiological buffers, such as PBS and saline. Interestingly, the minimum gelation concentration was significantly reduced in the presence of salts, and stiffer hydrogels could be obtained by increasing the salt concentration4. Such stimuli-responsiveness, along with the excellent optical transparency of these peptide hydrogels have been exploited for wound healing. Stimuli-responsiveness allows lysine-containing peptides to be utilised in spray formulations, where hydrogelation is triggered only on demand. Optical transparency also helps users to visually monitor the progress of hydrogel-facilitated wound healing.

In a rat model study, two lysine-containing peptides were used to accelerate the recovery of partial thickness burn wounds. Compared with Mepitel, a standard silicone-based wound dressing, both lysine-containing peptide hydrogels accelerated wound recovery by up to 50% over a 14-day period. The same hydrogels were also used to generate monodispersed silver nanoparticles (Ag NPs) within their interiors, which consequentially demonstrated antibacterial properties5. Ag NPs were released from the hydrogel at a very satisfying dose-response curve, killing different types of gram-positive and gram-negative bacteria. Disc diffusion studies confirmed that hydrogels releasing these Ag NPs could effectively eradicate various bacteria, including the intractable Pseudomonas aeruginosa. In another study, hybrid peptide hydrogels have been successfully functionalised with platinum anti-cancer drugs via click chemistry. Oxaliplatin-derived hybrid peptide hydrogels with up to 40% drug loading were tested for localised breast cancer therapy. These hybrid peptide hydrogels were generated by attaching oxaliplatin to lysine-containing peptides via copper-assisted alkyne-azide cyclisation, to confer anticancer properties on the hydrogel6. This formulation has been shown to significantly reduce tumour size over a 28-day period in a mouse breast cancer model.

For some in vivo procedures, it is crucial for the biomaterials to remain stable over a sufficiently long duration to effectively serve as scaffolds for new tissue growth. Scaffolds formed by the ultrashort self-assembling peptides described here rely solely on non-covalent hydrophobic interactions to hold the fibre structures together. To reliably increase the shape integrity of peptide hydrogels, cysteine residues were introduced into the peptide sequence to form crosslinks within the fibre network, following self-assembly. As expected, we successfully demonstrated a strong increase in elasticity and shape retention capabilities of the gel upon introduction of chemical crosslinks in the form of cysteine-mediated disulphide bonds7. Oxidation/crosslinking of cysteine-containing peptides can be achieved via:

Both methods are equally effective and also circumvent the need for horseradish peroxidase, which is normally required for thiol-to-disulphide oxidation using hydrogen peroxide. Electron microscopy and rheology studies showed that nanofibrillar scaffolds and hydrogel stiffness were not affected by the oxidation process. More importantly, disulphide crosslinking did not affect the ability of various cells to migrate into the prepared peptide hydrogel and proliferate, which is necessary to establish a viable 3D cell culture. These findings show the promising potential of peptide hydrogels for tissue engineering and drug delivery applications.

The adoption of new material technology platforms by industry is dependent on their cost-effectiveness and efficacy in the material production stage. In this regard, the production of ultrashort self-assembling peptides via solid-phase peptide synthesis can be economical and fast.

To exemplify this: The use of 10g of resin, which is the basis of solid phase peptide synthesis, can provide up to 2g of trimmer peptide. This is sufficient to prepare 400 ml of hydrogels with a peptide concentration of 5mg/ml. Thus, for the preparation of gel patches with 1 ml overall volume (Figure 2) in wound healing applications, a total of 400 patches can easily be prepared from just 2g of peptide. The sequential coupling of amino acid precursors onto the growing peptide on the resin can be performed manually or by an automated peptide synthesiser. Upon cleaving the peptide off the resin, the crude peptide can be purified by high performance liquid chromatography (HPLC). This purification process can be performed in a high-throughput manner with an automated HPLC system that utilises mass spectrometry (MS) to follow the purification process continuously. The HPLC-MS system can be programmed to only collect purified fractions corresponding to the mass of the peptide, and exclude fractions that contain extraneous masses to ensure high purity of the peptide obtained. The scale of peptide purification is essentially limited by the size of the preparative column. With the HPLC-MS set-up illustrated in Figure 3, it is easy to purify 2g of trimmer peptide in a few hours.

In this article, we have not elaborated on our efforts to explore the mechanism of peptide self-assembly to better understand amyloidogenesis. Structures formed by these ultrashort self-assembling peptides resemble natural amyloidogenic peptides2,8,9 and he simplicity of our system provides a feasible avenue for the study of amyloidogenesis. We have developed several effective amyloid inhibitors in the form of short trimer peptides, which have successfully been tested in in vitro assays. The next step will be to test these inhibitors in a suitable in vivo model. Functional amyloid inhibitors would clearly have a great impact on the treatment of degenerative ailments that implicate amyloids as causative agents, such as Alzheimer’s disease. 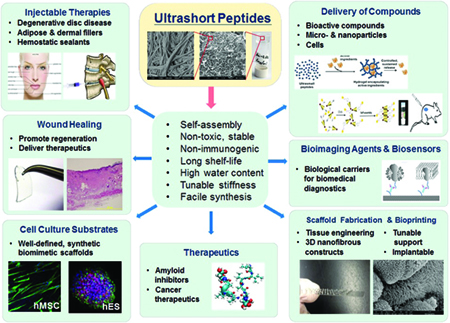 Overall, the ultrashort peptide hydrogels possess many desirable properties, which make them versatile for the applications mentioned above, as well as others ranging from label-free imaging and drug delivery to nano-bioprinting and dermal filler applications (Figure 4). Efforts have also been devoted to understand how the aqueous constitution of the hydrogel affects hydrogel properties10, which would allow further manipulation of the hydrogel properties for new uses. Hopefully, more exciting results on the successful applications of our ultrashort peptide hydrogel technology in the near future are to be found.

This work was supported by the Institute of Bioengineering and Nanotechnology (Biomedical Research Council, Agency for Science, Technology and Research, Singapore).

Authors: Kiat Hwa Chan, Jaspreet and Charlotte A. E. Hauser are researchers at the Institute of Bioengineering and Nanotechnology in Singapore