A light touch to fighting crime

Exploring how the uptake of digital technologies in light microscopy is changing the face of forensics, Markus Fabich discusses the work of researcher Dr Kevin Farrugia and his team at Abertay University

Exploring how the uptake of digital technologies in light microscopy is changing the face of forensics, Markus Fabich discusses the work of researcher Dr Kevin Farrugia and his team at Abertay University

From the laboratory to the courtroom, the possibilities presented by light microscopy apply to a range of tasks throughout forensic science, and as such it has become deeply ingrained within this field. A quick and accessible technique, forensics specialists turn to this approach for first-line analysis in both research and criminal investigations, before employing subsequent techniques. Light microscopy is, perhaps most importantly, non-destructive towards precious and irreplaceable samples. This is especially important since during a criminal investigation, permission must be granted for destructive testing of a piece of evidence, and in some cases sufficient information can be gathered through non-destructive approaches alone.

As light microscopy has evolved, systems now often incorporate the latest in digital technologies. Not only does this enable fast and detailed analysis and measurement in materials science applications, it also opens the door to several additional advantages. Firstly, this allows the system to encompass investigation, measurement and reporting functions of microscopy, thereby managing the complete workflow on a single machine. With a digital interface, accurate inspection no longer depends on in-depth microscopy knowledge. Thirdly, with digital capture and display, on-screen viewing is comfortable for long-term operation, discussions or training. As such, this new category of light microscopy is driving some intriguing discoveries in forensics research.

Latent fingerprints left on contact with a surface present a vital source of identification. Unique to each individual, fingerprints consist of skin ridges that follow a collection of patterns, such as loops, whorls and arches. In addition, each skin ridge holds a row of pores through which sweat is released, and although prints can sometimes be immediately visible if they are made in blood or paint, for example, more often it is the sweat that forms the print. Such latent prints require further treatments for visualisation, depending on the surface on which they were left.

Criminals are often conscious of removing evidence, and one area of research is the recovery of latent prints from metals where the initial residue of the print has been wiped with a cloth. Interestingly, once contact has been made, some of the chemicals in sweat can react with the metal and the fingerprint is effectively etched into the surface, leaving a permanent mark that no amount of wiping will remove. Where there is an attempt to remove the trace of contact with the metal surface, this can also suggest intent to remove evidence. Researchers at Abertay University are looking at ways to visualise these marks through heating the metal above 400ºC, then capturing and analysing images of the mark. In a set of experiments, a variety of metals were tested, together with how the print removal was affected using different fabrics, including wool, cotton and nylon (Figure 1). Visualising the complete print at higher magnification was important for in-depth analysis, and in all images this was enabled through the digital image stitching function integrated into the light microscope. Although in some cases the detail generated from these prints may not be sufficient to provide an exact positive identification, they can also be used in conjunction with other information, or to rule out a suspect.

Tackling drug abuse, the forensic research group at Abertay University works closely with Police Scotland, who ensure that novel research provides the most impact for front-line forensics applications. As part of this collaboration, batches of illicit drugs seized by the police have been analysed and characterised in detail using light microscopy. Drug abuse is a growing issue in itself, but adding to the problem, suppliers commonly replace psycho-active chemicals with alternative substances. Although these are often harmless materials such as sugar, they can sometimes be more sinister. Moreover, the level of active drug substance present can often vary significantly. For example, whilst some illicit diazepam tablets recently examined were found to contain 10 mg (the dose available from the pharmacist), others were found to contain four times this level, posing a serious risk in terms of overdose. It is therefore vital to try and characterise batches of these tablets for intelligence purposes, and the research group at Abertay University are investigating the possibility of doing this by using a combination of both key physical and chemical characteristics. The hope is that a statistical model can be developed which can identify different populations of tablets within the illegal supply chain, assisting the police in determining links between different samples – and perhaps even trace certain batches of drugs back to their supplier.

A batch of seized tablets was recently analysed, with a few case samples shown in Figure 2. Visual characterisation can be achieved based on a number of features, such as colour and design. Many of these tablets contain logos, and some also contain defects on the edges – possibly caused by damage to the machinery for tablet pressing – which could eventually be linked to the batch of drugs. Digital capability has improved the visualisation of these tablets, with the Extended Focal Image (EFI) tool. Utilising 3D imaging, EFI compiles a series of 2D images at different points across the Z-axis, forming a fully focused composite image across the complete sample, thereby allowing the complete surface of the tablet to be viewed in detail. Moreover, the ability to physically tilt the head of some microscope systems whilst retaining a fully focused digital image further facilitates sample inspection and documentation (Figure 2B). 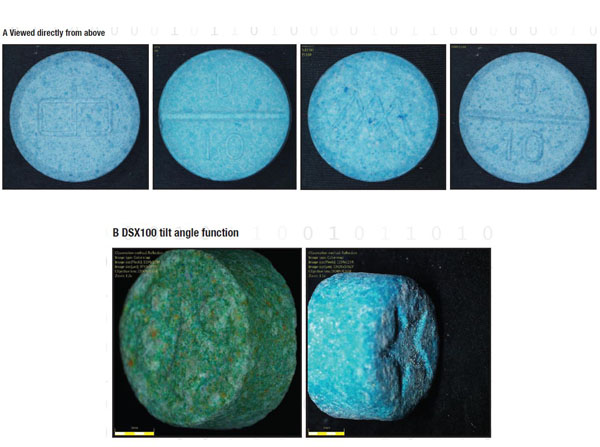 Figure 2: Characterising seized drugs. True colour information assists the police in tracking tablets back to the supplier. From above (A) and highlighting the logo designs and edges of the tablets with the tilting head function (B). Using the Olympus DSX100 digital microscope. Images courtesy of S Greenfield, Abertay University.[/caption]

Documents may be fraudulently manipulated or forged for a number of reasons. Identity theft and benefit fraud are common, or a murderer may have created a fake suicide note for his (or her) victim. The primary aim of any analytical process is to gain as much information as possible without damaging or altering the document, and this is where the non-destructive nature of light microscopy comes into play. Analysis of such documents often involves looking at handwriting, ink and paper, and one project at Abertay looks at discriminating ball point pen mark indentations on paper. When a line is drawn on paper, the pointed tip of the pen distorts the fibres of the paper, leaving an indentation. The morphology of the indentation can vary depending on the user’s style of writing, as well as the pen, quality of paper and how soft or hard the underlying substrate is. Alternative methods can also be used alongside light microscopy to provide complementary information, such as the chemical composition of ink. However, chromatography is limited with gel pen inks, which are polymer inks and therefore difficult to dissolve, requiring an alternative means of analysis.

The magnifications achieved using light microscopy allowed visualisation of the actual fibres of the paper at the same time retaining the colour range and distribution of ink. With digital tools, the indentation depth could also be measured and visualised in the form of a height map that can be viewed and analysed in either 2D or 3D (Figure 3). 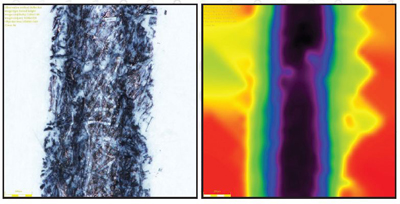 A picture paints a thousand words, and in a courtroom scenario an image can be much more easily explained to a jury compared to a numerical or verbal explanation. In fact, how evidence is presented and communicated to the courtroom is just as valuable as the insights gained through microscopy. Through integrating microscopes with software programmes, data can be clearly communicated via a report document. Furthermore, in all three projects described, one key function was integral to image analysis: image stitching. Whether studying a fingerprint, an illicit drug logo or an extended pen mark on a questioned document, creating and presenting large images is vital for communicating evidence to a jury. Presenting the evidence in context, these images can also be zoomed in retrospectively to pick out even the finest details of the sample and yield much greater insight.

In summary, the design of modern light microscopes is increasingly influenced by digital technology, which greatly enhances their analysis capabilities. As we have seen, this shift has already yielded greater insights into a variety of forensic samples, transforming several projects in Dr Kevin Farrugia’s forensics research programme at Abertay University.

With the speed and accessibility of modern light microscopy, it remains clear that as this technique evolves, it will continue to enhance forensics applications, from research to applied investigations – and even in the courtroom.