Reaching out for the origins of life

Evidence suggests meteorites could have been an important source of the prebiotic compounds required for life on Earth. Now, after the success of ESA’s Rosetta mission, NASA are hoping to uncover the secrets of the origin of life with a new mission set to return a sample from a meteorite. 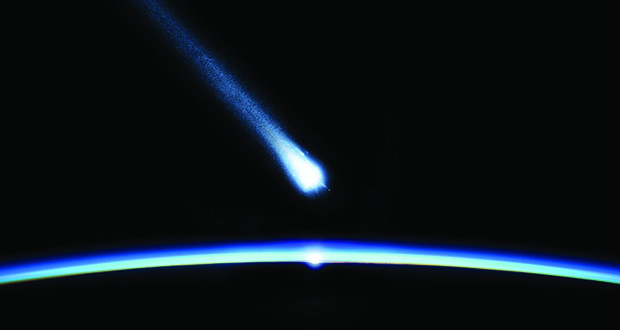 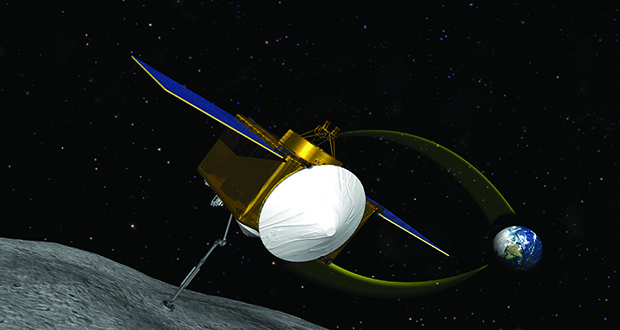 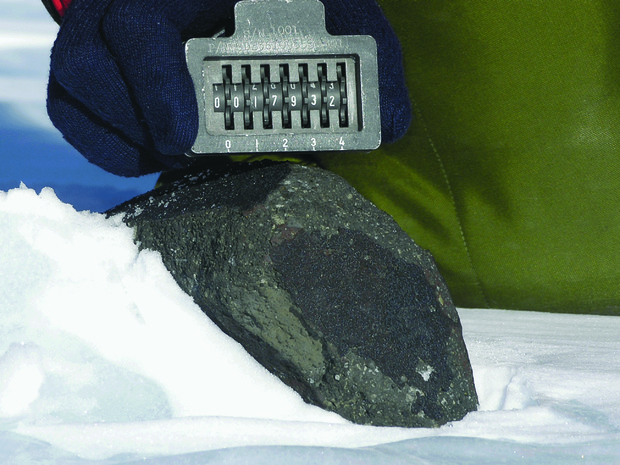 Evidence suggests meteorites could have been an important source of the prebiotic compounds required for life on Earth. Now, after the success of ESA’s Rosetta mission, NASA are hoping to uncover the secrets of the origin of life with a new mission set to return a sample from a meteorite.

The nature of the origin of life is a topic that has engaged people since ancient times. Where did we come from? What was the first life? How are we related? Are we alone? The study of biologic remains and environments preserved in rocks (fossils) and biochemical pathways and structures found across organisms (molecular fossils) can address these questions. Molecular evidence shows that all life on Earth is related – fundamentally, biology shares a genetic language, related molecular machinery, and common chemistry. By looking at the details of genetic and protein sequences more detailed relationships can be determined for modern organisms.

Fossil evidence of life or the environment in which it formed has been lost to the active geology of the Earth. There are some microbial and chemical fossils at 3.5 and 3.8 billion years ago, and some ancient zircon crystals indicating cool wet crust at 4.4 billion years ago. But organic chemistry from this time is lost. We also know from the craters on the Moon that this was a time when asteroids and comets impacted the Moon and thus the Earth.

Since the Earth is so uncommunicative about her early history, scientists turn to extraterrestrial samples and observations to either model the ancient Earth in the laboratory and on computers, or to study meteorites.

The Alais meteorite, which landed in southern France in 1806, was found to have extraterrestrial clay, water, and carbonaceous material by Jöns Jacob Berzelius in 1833. This was the first “carbonaceous chondrite” meteorite identified, and it launched the field of extraterrestrial organic research. Since then the study of meteorites to understand the organic compounds available from space for the origin of life on Earth (or Mars, or Europa, or Enceladus, etc.) has grown. Carbonaceous chondrites are particularly ancient fragments of asteroids (or comets) that never melted. They display the first solid matter to condense in the solar system and even some minerals that predate the solar system. Now scientists use meteorites to gain insight into the chemistry of the early solar system and as a model for the chemistry that may have occurred on the early Earth.

The discovery of specific complex organic compounds from the 1960s to the present, including compounds that are important to biology on Earth, further bolstered the idea that meteorites could have been an important source of prebiotic compounds required for the emergence of life. In fact, the present day mass flux of carbon-rich micrometeorites to the Earth is estimated to be ~40,000 tons per year and the meteoritic input of carbon to the early Earth may have been up to 1,000 times higher during the period of heavy bombardment ~4 billion years ago¹.

Since the time of Berzelius, there was the concern that meteorites that land or are found in the biosphere are rapidly contaminated by biology. Clever methods have been used to determine which compounds are sullied. The comparison of the molecular distribution, chirality, and stable isotopic ratios can indicate the extent of biological contamination². Biology uses very specific compounds within a class. For example of all the infinite possible structures of amino acids that can exist, biology uses about 20. Like your hands, some molecules can exhibit chirality: the non-superimposable mirror images. Again amino acids in biology are almost exclusively “left handed” while those from non-biological sources are typically an equal mix of left and right. Due to differences in bond strengths, for example of a 12C-12C versus a 12C-13C bond, life shows an isotopic fractionation in the carbon it incorporates from the environment. As such, biology is depleted in heavy stable isotopes.

Searching for meteorites in environments with fewer creatures and fewer interfering Earth rocks, such as deserts and Antarctica, can reduce the level of contamination. Additionally, collecting terrestrial material from the area where the meteorites were found gives important contamination background³. The study of soil or ice from the recovery site serves as a natural witness to the contamination environment from the sample. 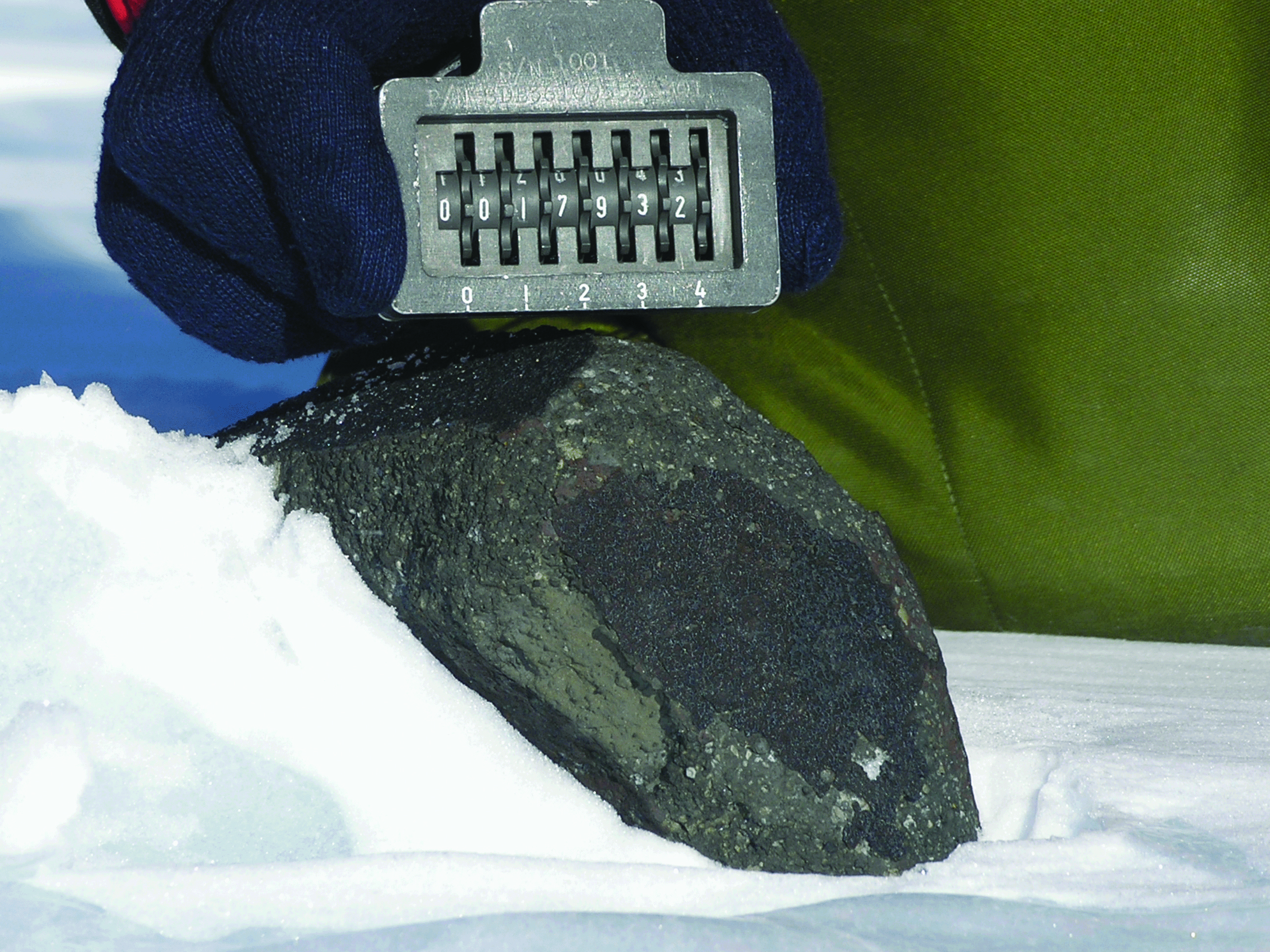 While the terrestrial meteorite collection is an invaluable sample of the early solar system, it suffers from a few problems. First (with very few exceptions), the relationship between a meteorite and the parent body is unknown. There is no way to know if a specific sample represents a common class of asteroids, or unusual regions of common asteroids, or common regions of unusual asteroids, or comets, etc. Second, even with the clever chemistry and background samples, there is no way to understand all the contamination history of a meteorite or “subtract out” particularly abundant contaminants.

The sample returned from Bennu by OSIRIS-REx will circumvent many of these problems, providing pristine asteroidal material from a well-characterised parent body.

OSIRIS-REx is the acronym for the NASA asteroid sample return mission Origins, Spectral Interpretation, Resource Identification, and Security?Regolith Explorer. It will survey near-Earth asteroid (101955) Bennu to understand its physical, mineralogical, and chemical properties; assess its resource potential; refine the impact hazard; and return a sample of this body to Earth.

The principal investigator of this competitively selected mission is Professor Dante Lauretta of the University of Arizona. OSIRIS-REx is scheduled to launch in September 2016, rendez-vous with Bennu in 2018, depart in 2021, and return to Earth in 2023. During the rendez-vous OSIRIS-REx will extensively study the asteroid to find the safest and most scientifically interesting site to collect between 60g and 2kg of pristine regolith (surface rocks and dirt). This is accomplished via its payload of instruments: the OCAMS camera suite from the University of Arizona, the OVIRS visible-infrared spectrometer from Goddard Space Flight Center, the OTES thermal infrared spectrometer from Arizona State University, the OLA laser altimeter contributed by the Canadian Space Agency, and the REXIS mapping X-ray spectrometer student experiment from MIT/Harvard.

Bennu is a 500m across spectral type B near Earth asteroid4 that has been extensively observed since it was discovered in 1999 via ground and space-based telescopes. This gives us an unprecedented level of information about the shape, spectra, temperature, and surface properties of any asteroid not yet visited by a spacecraft. This allows the OSIRIS-REx team to optimise the spacecraft and its collector, “TAGSAM”, to what is known about Bennu and build in flexibility for what is unknown and unexpected.

The Astrobiology Analytical Laboratory at NASA Goddard Space Flight Center analyse a wide range of meteorites for organic compounds important for life. The central method is GC or LC, coupled to a range of different kinds of mass spectrometry.

For example, we focus on the analyses of complex suites of amino acids extracted from rare and complex mineral matrices. We use pre-column derivatisation to form fluorescent diastereomers that can be separated on an LC column. Analysis is via simultaneous high-sensitivity/high-specificity fluorescence and simultaneous time-of-flight (or triple quadrupole, quadrupole time-of-flight, or Fourier transform) mass spectrometry, which is a high-sensitivity/low-specificity detection. This allows us to characterise both the chirality and distribution of amino acids in a sample. Once this is understood, we can decide to extract larger quantities of sample to study the compound-specific stable isotopic ratios. These ratios give insight5 into the formation environment of the molecules and can readily distinguish between terrestrial contamination and extraterrestrial material. This is accomplished by pre-column derivatisation to form volatile compounds that can be separated on a GC column. The material is analysed in parallel with a quadrupole mass spectrometer to confirm compound identity and individual compounds are combusted/reduced to form CO2, N2, or H2 for isotopic analysis with a magnetic sector mass spectrometer.

We have been fortunate to analyse samples returned by NASA’s Apollo and Stardust6 missions, as well as use these advanced techniques and careful contamination analysis to solve a 50-year-old debate to conclusively demonstrate the presence of purine7 bases in several meteorites, and have studied abundances and chiral excesses of amino acids across all carbonaceous chondrite meteorite classes8-13.

The detection of compounds in meteorites that look similar to those found in terrestrial life means that the chemical language of astrochemistry is also the language of biology. So if life exists elsewhere in the solar system, it may be biochemically similar to us. But no one can yet be sure.

In addition, we are currently analysing spacecraft components and the cleanroom environment for contaminants that may hamper the investigation of the samples returned by OSIRIS-REx. Better than the witnesses of dirt and ice collected when analysing terrestrial meteorites, OSIRIS-REx will have witnesses to understand what few contaminants the spacecraft brings with it.

So 210 years after the first carbonaceous chondrite meteorite, Alais, was found, OSIRIS-REx will launch to collect pristine samples from Bennu. These samples will be from a specific place on a specific carbon-rich asteroid with very low and very well understood contamination. These precious samples, to be returned to the Earth in 2023 and archived for decades beyond that, may indeed hide the secrets to the origin of life.We hope that our lab, combined with other labs around the world and even scientists and instruments that do not yet exist, will be able to unlock their secrets.

Dr Jason Dworkin is Chief of NASA’s Astrochemistry Laboratory. He is currently working on the OSIRIS-Rex project, the NASA Cosmochemistry Program, the NASA Exobiology Program and Sample Analysis at Mars.