A fascinating act of cellular cannibalism

After a century of observing strange acts of cellular cannibalism, Jo Durgan and Oliver Florey tell us how close we are to understanding entosis, and what it may mean for cancer biology 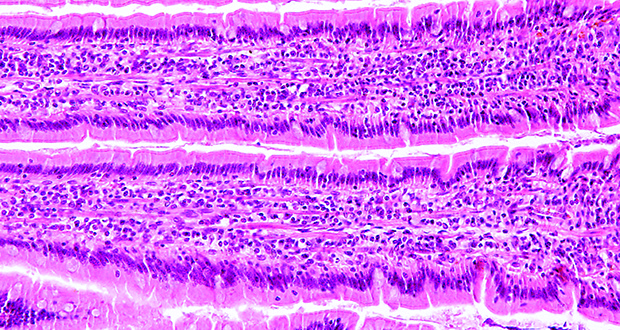 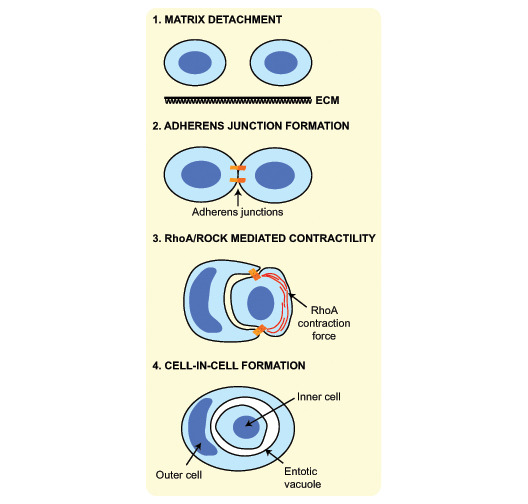 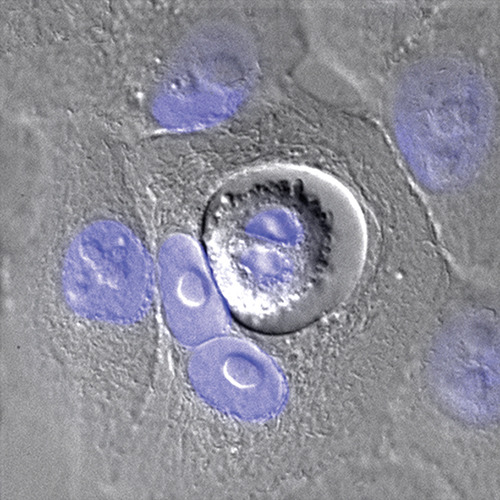 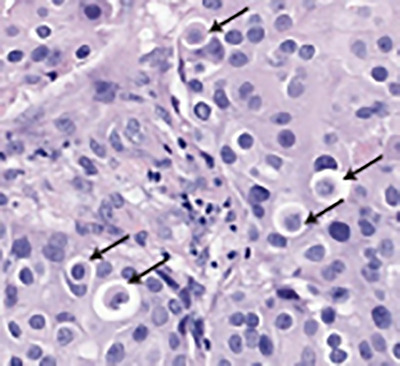 After a century of observing strange acts of cellular cannibalism, Jo Durgan and Oliver Florey tell us how close we are to understanding entosis, and what it may mean for cancer biology

Our research explores the relationship between entosis, a recently described form of live cell engulfment, and human cancer. During entosis, one live and perfectly viable epithelial cell is engulfed, killed and digested by another, in a fascinating act of cellular cannibalism. Although cannibalised cells have been observed in tumour samples for more than a century, many questions remain about the molecular and cellular events that drive entosis, and the effect that this process has on tumour progression. The main objectives of our work are to investigate the mechanisms underlying cell cannibalism and to explore its significance in the context of cancer biology.

For more than one hundred years, pathologists have recorded the appearance of cannibalised cells, referred to as ‘cell-in-cell’ structures, within human tumour specimens (Figure 1). However, little research had been undertaken on this topic until 2007, when Michael Overholtzer and Joan Brugge ‘rediscovered’ this process through studies of cultured human cell lines at Harvard. Recognising the potential significance of this unexpected observation, Dr Overholtzer undertook a comprehensive investigation of tumour cell cannibalism. His studies uncovered the basic mechanics of homotypic, epithelial ‘cell-in-cell’ formation and characterised the novel form of cell death that ensues1. The process was named ‘entosis’ after the Greek word ‘entos’, meaning inside, into or within. 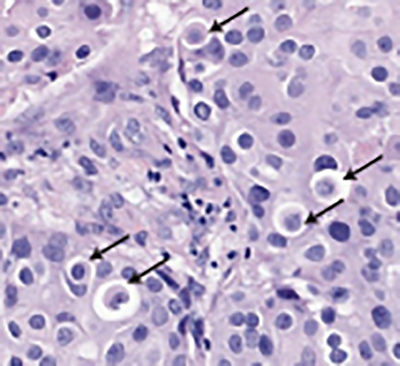 Entosis bears several similarities with more familiar cell engulfment processes, such as phagocytosis of pathogens or dying cells by macrophage of the immune system. Like ‘apoptotic phagocytosis’, entosis involves the internalisation and complete degradation of one cell by another. However, while macrophage associated engulfment is mediated by ‘professional phagocytes’, entosis occurs between two equivalent epithelial cells, which are not specialised for this type of activity. Furthermore, while a phagocyte detects and then actively engulfs and degrades its prey, internalisation through entosis is actually driven by the ‘inner’ cell, which effectively pushes its way into the cytoplasm of its host, where it is then killed and digested. Given that the inner cell forces its way into its host, this act of cell cannibalism may be more accurately considered as a ‘forced feeding’ event, and perhaps more ‘assisted suicide’ than ‘cellular murder’.

Entotic structures: cellular Russian dolls Mechanistically, entosis is driven by the detachment of epithelial cells from the underlying extracellular matrix (Figure 2)1. The continued growth of cells under matrix detached conditions, or so-called ‘anchorage independence’, is one of the hallmarks of cancer, which may help explain why cannibalised cells are so frequently observed in tumours. Loss of matrix adhesion can be recapitulated for experimental study in the lab by cultivating epithelial lines (e.g. MCF10A breast cells) on low adhesion surfaces, or in a 3D matrix such as soft agar. Under these conditions, roughly 10% of suspended MCF10A cells will harbour one of their neighbours at any given time. Through ongoing work, we aim to explore whether matrix detachment is the sole trigger for entosis, or whether additional cues for cell-in-cell formation may also operate.

A characteristic feature of epithelia is the establishment of cell-cell contacts, termed adherens junctions, with neighbouring cells. The formation of new adherens junctions can proceed even in the absence of attachment to the underlying matrix, such that when two cells meet in suspension, they will initiate this fundamental process. The formation of a nascent junction generates a contractile force, driven by the small GTPase RhoA and its effector Rho-associated protein kinase (ROCK), through regulation of the acto-myosin cytoskeleton. If a slight imbalance exists between the level of contractility in a pair of suspended cells, then the more contractile one may push or ‘invade’ its way into the more deformable neighbour (Figure 2)1. The invading cell becomes enwrapped by the forming adherens junction, until it is fully engulfed, housed inside a vacuole within the cytoplasm of its host (Figure 3). The basic mechanism of entotic formation involves some of the most fundamental machinery of the epithelial cell, namely the forming adherens junction and the acto-myosin cytoskeleton. Entosis is thus an intriguing new model in which to explore the regulation and additional functions of these essential epithelial proteins and structures. 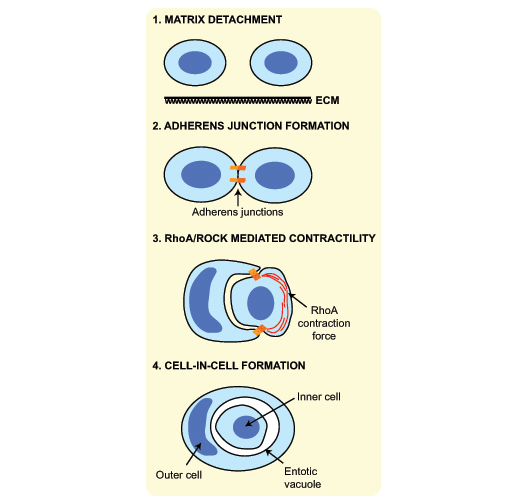 Entotic cell fate: division, death or escape Once internalised, an entotic cell is held in a single membrane, entotic vacuole that sits in the cytoplasm of its host2. Amazingly, the inner cell can remain viable in this compartment for many hours; using timelapse microscopy we have even detected cell division of the engulfed cell inside of its host (Figure 4). Occasionally an inner cell can escape from the entotic vacuole and slip back into the surrounding population, but the vast majority of internalised cells die inside of their hosts.

Cell death by entosis typically occurs through a non-apoptotic mechanism, in which the host cell recruits lysosomes to the entotic vacuole, essentially acidifying, killing and digesting its internalised neighbour¹. This intriguing form of cell killing is regulated by a specific subset of proteins that are more usually associated with autophagy (Atg proteins)2. This non-canonical activity of the autophagy machinery controls vacuole processing not only during entosis, but also in a range of other engulfment events (e.g. phagocytosis and macropinocytosis). Together, these observations suggest that a conserved mechanism exists for the processing and degradation of engulfed extracellular materials. Furthermore, these findings indicate that Atg proteins can control the digestion of both intracellular material through classical autophagy, and extracellular material through non-canonical autophagy.

Entosis represents an ideal model for studying the emerging link between non-canonical autophagy and cellular engulfment events, as the large entotic vacuole is uniquely amenable to microscopic analyses and imaging-based screens. In ongoing work, we are using entosis to learn more about the fundamental mechanisms of non-canonical autophagy signalling, vacuole processing and lysosomal recruitment that are at play during a broad range of macroendocytic engulfment events. 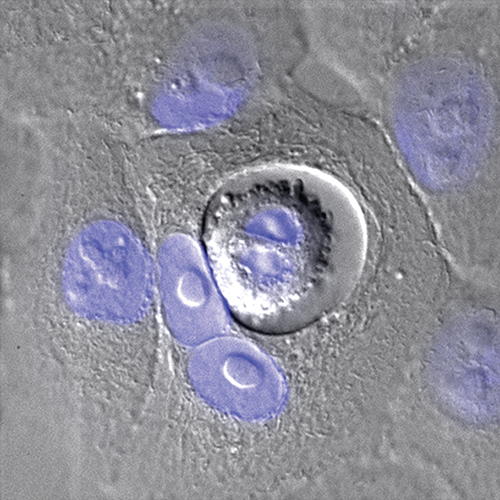 Figure 3: Entosis in live MCF10A cells. Cells were visualised using DIC, with nuclei stained using Hoechst (blue). The outer cell is binucleate (see text for information on host cell division failure) and the inner cell is dividing (proving it is live and viable).[/caption]

Entosis in cancer: a double-edged sword? The consequences of cell-in-cell formation and cell killing by entosis, and its impact in the context of cancer, are potentially complex. On the one hand, the murder and digestion of one cancer cell by another has the capacity to confer tumour suppressive activity, effectively limiting tumour outgrowth. On the other hand, as the remaining cell gains valuable nutrients from cannibalising its neighbour, this transaction simultaneously confers a survival advantage to the host that may be of particular benefit in the nutrient deprived conditions of a tumour. In simplified terms, entosis may be viewed as growth suppressive from the perspective of the inner cell, but growth promoting for the host, and further work will be required to define the overall impact and significance of this process, which has long been observed in human tumours.

Another important observation pertaining to cell-in-cell structures in cancer relates to entosis as a non-genetic route to genomic instability3. Following the formation of a cell-in-cell structure, the host cell may attempt to go through a round of division, in the continued presence of its internalised neighbour. Under these circumstances, the entotic vacuole represents an enormous physical obstruction that can impede abscission, greatly increasing the risk that cell division will fail. Such defects in the completion of cytokinesis can lead to multi-nucleation, followed by aneuploidy and genomic instability, a series of events well known to drive tumour progression.

In addition to its conflicting roles in cell survival and division, entosis is emerging as an intriguing mediator of cell competition in mammalian cells4. In most entotic pairs, one cell survives while the other is killed. As such, if one subgroup of cells preferentially engulf and kill another, the resulting population will be shaped by this process of selection. In a recent study, Sun et al showed that in a mixed population of tumour cells, those expressing oncogenic Ras are more commonly found as entotic hosts4. This finding suggests that cells expressing this potent oncogene will tend to kill their neighbours, gain nutrients, and dominate the culture, while being pushed to accumulate even more additional mutations by entosis-associated failure of division. In light of these findings, we may speculate that by killing some cells and feeding others, entosis has an influential role in the evolution of a tumour.

Given the pleiotropic effects of entosis in the context of tumour biology, the exact impact of this process in cancer is a topic of growing interest. Detailed work using patient samples will be required to determine the significance of entosis in different types of tumour, and to assess whether cell-in-cell formation may have diagnostic, prognostic or even therapeutic value.

Cell cannibalism beyond cancer: additional roles for entosis? To date, the vast majority of work on entosis has focussed on transformed cell lines and human tumour samples. But, does entosis have functions outside of cancer? This is an important and interesting question and emerging work suggests that cell cannibalism mediated by entosis may indeed be of physiological significance, for instance, during embryo implantation5. In the early stages of pregnancy, maternal uterine luminal epithelial cells can be detected inside of embryonic trophoblast cells, in an in vivo example of cell-in-cell formation. It is suggested that this process of cannibalism is required for the trophoblast cells to reach the underlying stroma to achieve successful implantation. This work provides the first evidence that entosis may play a physiological role and opens up the possibility that this form of cell cannibalism may actually represent a normal biological process that is subverted in cancer. We are now exploring whether entosis can be observed during any other physiological settings.

Entosis is a fascinating process of live cell engulfment and killing that may plays a role in normal physiology, as well as cancer. By studying entosis, we hope to gain insights into some fundamental aspects of epithelial cell biology, as well as to explore an intriguing new avenue for cancer research. Furthermore, by using entosis as a model of macroendocytic engulfment, we seek to investigate the emerging pathway of non-canonical autophagy, and the trafficking events that promote lysosomal degradation of internalised material. Thus, after 100 years of observing ‘cell-in-cell’ structures, there is now an exciting push to analyse and exploit this phenomenon, to open up new insights in both cell and cancer biology.

Jo Durgan is a post-doctoral researcher at the Babraham Institute, Cambridge. She holds an FP7 Marie Curie Fellowship, and received a 2015 L’Oréal UK and Ireland Fellowship For Women In Science.

Oliver Florey is a tenure track group leader within the Signalling Programme of the Babraham Institute; he is supported by a Cancer Research UK career development award.

[box type="shadow" ]The Babraham Institute The Babraham Institute is a life sciences research centre near Cambridge, UK. The Institute undertakes innovative work to address fundamental biological questions, exploring the molecular mechanisms that underlie cellular functions, with a particular emphasis on understanding ageing. The Institute aims to maximise the impact of its work, through public engagement and translation of research for social and economic benefit. The Babraham Institute receives strategic funding from the BBSRC, with additional support from other research councils, medical charities, the European Commission and through partnerships with industry. The Institute is committed to creating, maintaining and promoting equality and diversity, and this year received a silver Athena SWAN award in recognition of its commitment to supporting women in science.[/box]