The super-organism behind Nature’s skyscraper

Notions of the ‘super-organism’ need to be invoked to truly understand the intelligence behind Nature’s skyscraper – the termite mound. Hunter King discusses the hive-mind behind these incredible structures and explores how they ‘breath’. 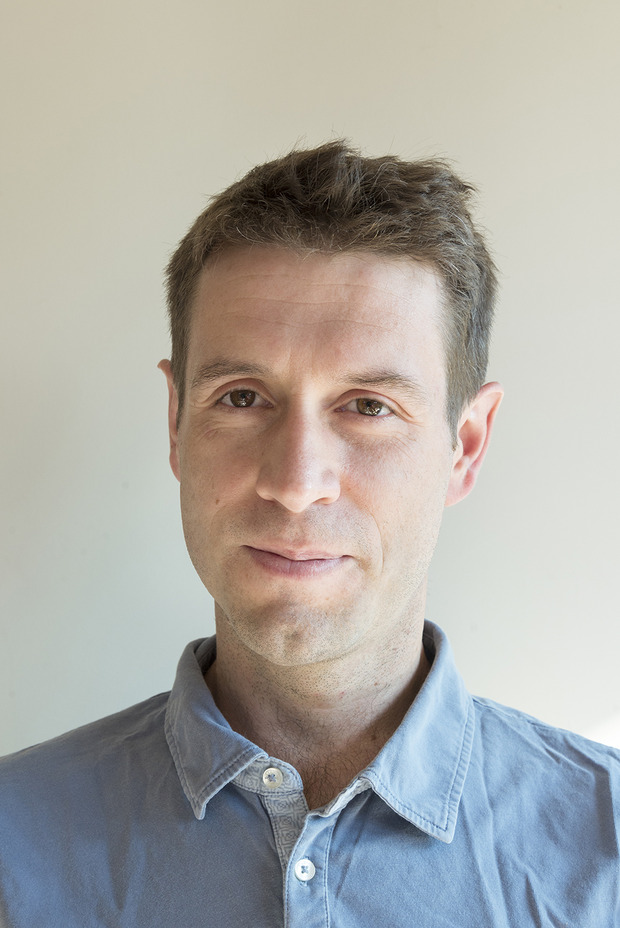 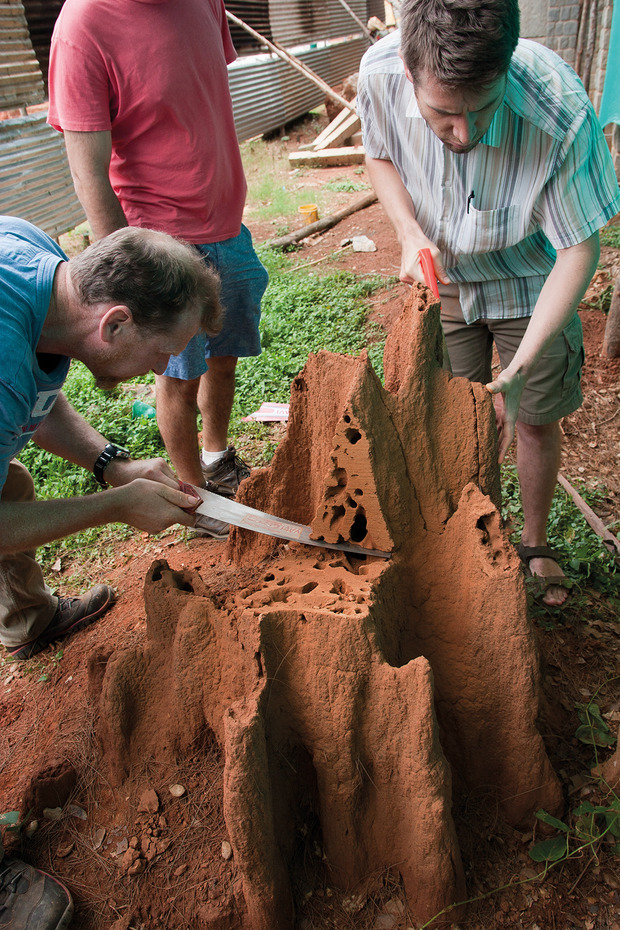 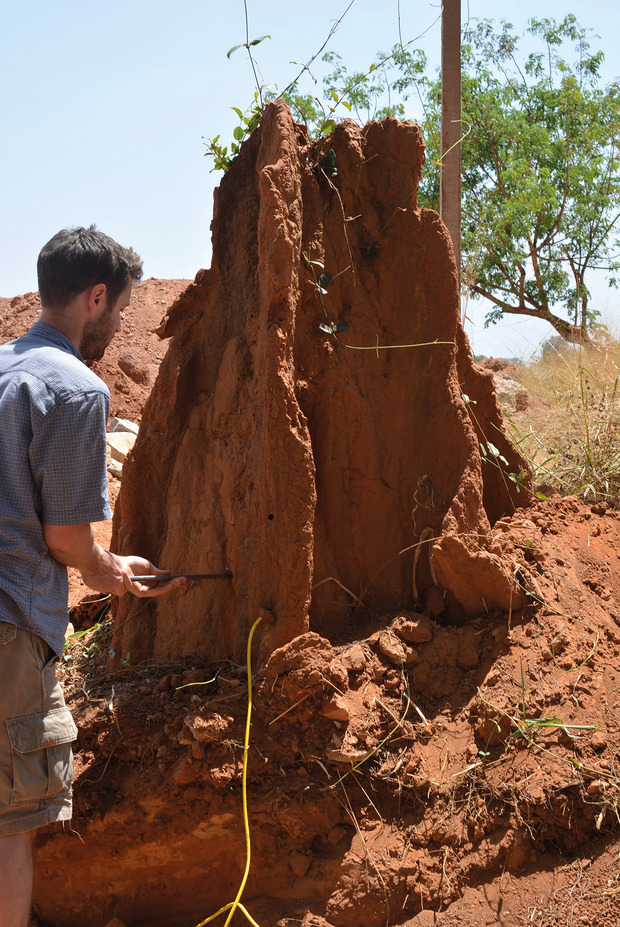 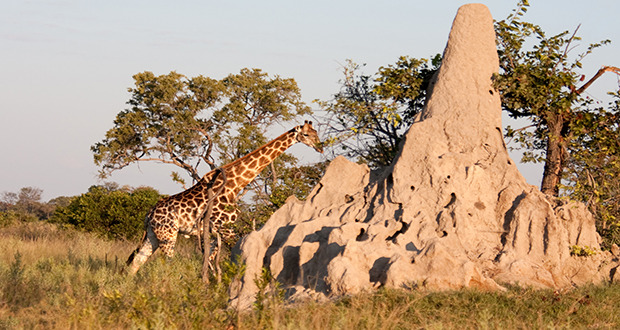 Notions of the ‘super-organism’ need to be invoked to truly understand the intelligence behind Nature’s skyscraper – the termite mound. Hunter King discusses the hive-mind behind these incredible structures and explores how they ‘breathe’.

Like many species of fungus-harvesting termites in tropical and subtropical regions, Odontotermes obesus in Southern Asia builds massive structures which can protrude two meters from the ground. These mounds can be as common as any other natural feature of the landscape, easy to accept and gradually ignore. Even a passing scrutiny of a mound, however, reveals more questions than answers. Perhaps the most immediate is: Why are they so big?

Scaled for the size of an average four millimeter termite, a typical mound is a veritable skyscraper, roughly equivalent in height to the tallest human-made structure: the Burj Khalifa. Naively viewed as a simple house, the scale is impressive, and might suggest that it grows with a massive population of inhabitants, curiously building more and more living space above ground. Breaking the surface and quickly looking inside, however, one finds a contradictory scene: a vast network of largely empty, strangely broad tunnels, often several centimeters (many termite-lengths) in diameter. 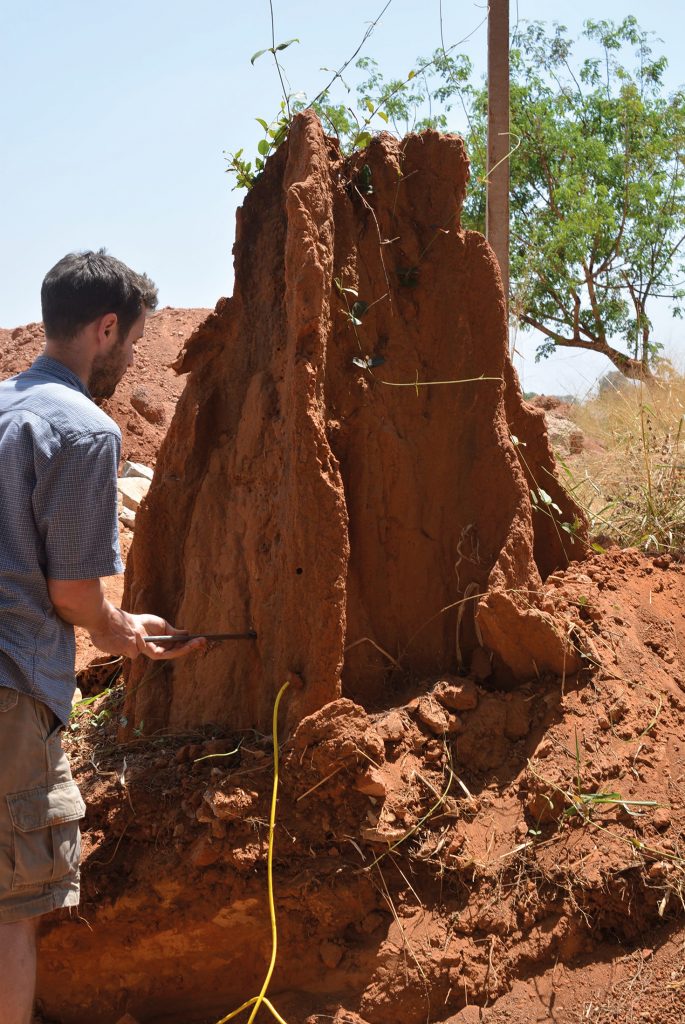 Termite mounds can be up to 7.5m in height. If humans were to build structures this large they would be almost 1,500m high.[/caption]

Here and there, a soldier termite patrols a tunnel, or a collection of workers repair a crack, but none of the insects seem to be making meaningful use of the space. In contrast, a distinct “nest” area can be found by digging down just below ground level, directly under the mound. That space is writhing with active termites tending to fungus combs and brood, bumping into each other as they move in and out through foraging tunnels. Thus, by looking closer, we are forced to question the basic premise: Why do they build a mound at all? Additionally intriguing, upon damaging the structure at any location, one notices the inevitable coordinated response of many termites, each individually carrying and depositing material for its repair. This reliable behaviour is even more surprising, considering that termites lack a distinct central decision- making authority, sight (even if it wasn’t dark), and, presumably, significant intelligence or awareness of much beyond their immediate environment. The process of collective repair looks much like the process of construction, by which the shape and function of the mound emerges, out of simultaneous local actions. How do they coordinate construction on such a scale?

Scaled for the size of an average four millimeter termite, a typical mound is a veritable skyscraper, roughly equivalent in height to the tallest human-made structure: the Burj Khalifa

These questions can be rephrased invoking the notion of “super- (or extended-) organism”– that the individuals (and physical structures they maintain) collectively perform functions necessary for their collective vitality that do not exist on the individual scale¹. Effective ‘organs’ of the system can then be found in unconventional forms. The fungus, for instance – which is cultivated in large combs underground by supplying it with faeces – is subsequently consumed to supplement otherwise deficient termite nutrition from foraged grasses and bark. In this way, it plays the role of outsourced, collective, gut flora of a large intestine. The (misleadingly named) king and queen are simply specialised reproductive organs for the whole colony. A notion of collective decision making ‘brain’, which leads to effective strategies for foraging, defense, and mound construction is thought to exist in some emergent, coherent pattern of local stimulus-response and communication between a sufficiently large number of individuals. The analogy with action and communication of individual neurons in a proper brain (and its subsequent emergent ability to make decisions) is compelling, if not completely illuminating.

In the context of colonial organs, the mound could be naively seen as a thick skin to protect from attack. Clearly, they must keep their nest walled closed, with no opening as big as an ant. If not, their natural enemies can identify a breach, and quickly coordinate a raid to efficiently carry away termites, single-file out the hole, until termite workers seal off the passageway deeper in. But why, then, the complex network of peculiarly broad conduits that comprises its interior? It is widely accepted that the function of these mounds is to solve another problem caused by living in high concentrations, with fungus, underground: asphyxiation. The mound, it is thought, acts as a lung: pushing stale air from the metabolic sources underground upward to its porous exterior walls, across which it can diffusively exchange with fresh air. How is the air pushed and how does it move, without a diaphram, elasticity, or a mouth? The specific ventilation mechanism has remained a topic of debate within the biology community, as sources of indirect evidence point to different driving forces and flow patterns²,³,?.

As a post-doc in L. Mahadevan’s lab at Harvard, I became involved in the project as part of a collaboration with biologists and engineers – led by J. S. Turner (ESF, Syracuse), R. Soar (Nottingham-Trent), and S. Sane (NCBS, Bangalore – looking to understand swarm construction, morphogenesis, and functionality of mound architecture. Unsurprisingly, much of the discussion of construction is deeply connected to the particulars of mound function, where competing models predicted, alternatively: steady, unidirectional flow pushed by metabolic heating from the nest; or sloshy, oscillating flow pushed by transients in incident wind. Working with S. Ocko, then a graduate student at MIT, we set out to directly measure, in-situ, flow inside the conduits in order to unambiguously address the ventilation question. 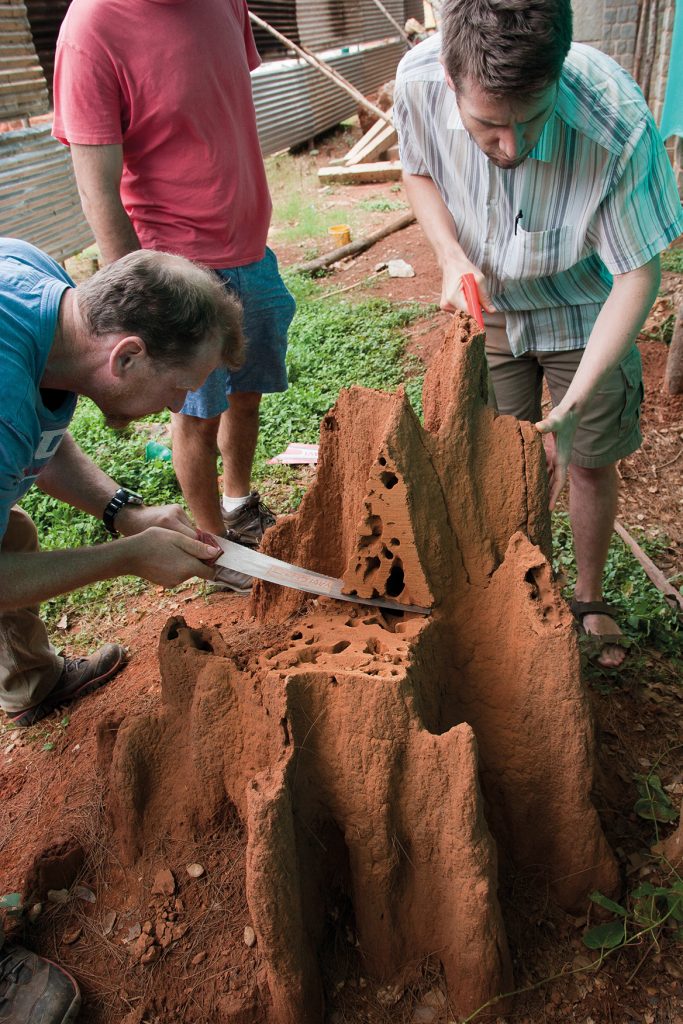 Termite mounds act as a 'lung' allowing for the diffusion of gases in and out of the mounds.[/caption]

To this end, we developed a portable, data-logging anemometer that is capable of measuring the direction and magnitude of tiny (~1cm/s) flows in a confined space while being cheaply repairable/recalibratable in the common event of termite attack. The working principle was a variation of standard hot-bead anemometry, implemented with 3D-printed housing and Arduino-based interface. To calibrate for the unusual flow conditions for which it was intended, we also built a custom slow-flow vertical wind-tunnel of roughly mound-conduit diameter. We then traveled to Bangalore, India for data. We made use of as many mounds as we could find in and around the campus of NCBS, distributing our measurements over all hours of day and night, each time cutting a small, sensor-sized hole into a vertically-oriented surface conduit, recording the flow for the couple available minutes before the termites become aware of the intrusion and attack the exposed and sensitive probe. We supplemented these measurements with those of temperature and CO? in different parts of the mound as a function of time of day.

Our main result? was an unexpected mix of previous theories. We found that at any moment, the air flows in a smooth convective cell, but the direction changes twice a day, driven not by metabolism, but by transient thermal forcing of its external environment. Mound architecture itself takes advantage of daily oscillations in ambient temperature to drive convection for respiration. Because the internal portion is insulated and the external structures are exposed, they equilibrate with the environment at different rates. That means, at most times, there is a temperature difference between internal conduits and external conduits. That temperature difference and sufficient connectivity are enough to facilitate daily-alternating convective flow throughout the mound. The CO? concentration follows a daily cycle consistent with this picture. During the day, the nest stagnates, as concentrations reach nearly 6%. When the temperature gradient reverses in the evening, and larger flow brings stagnant nest air up the chimney and out toward the surface conduits, where CO? diffuses across the external walls, quickly refreshing the nest air, as though the mound had taken a single, long breath. The mechanism is as reliable as the fact that days are warmer than nights.

We found that at any moment, the air flows in a smooth convective cell, but the direction changes twice a day, driven not by metabolism, but by transient thermal forcing of its external environment.

The result is interesting in three ways: It represents a novel example of engineering principle, in which useful work is derived from fluctuations of an intrinsic environmental variable, an idea not commonly found in human engineering. (One unusual example is the “Beverly clock”, which is effectively rewound by fluctuations in barometric pressure and ambient temperature – the clock similarly fails if these parameters remain constant for too long.) Secondly, though our results do not directly speak to the process of decentralised construction, they do both: explain a functional solution attained by that process, which should be crucial in distinguishing potential models; and describe the most relevant physical conditions in which construction/repair is done, suggesting possible cues and feedback mechanisms.

Last, it could lead to further, more pointed application in passive human architecture, a field in which termite mounds have already provided inspiration.

Author: Hunter King will be starting his role this autumn as Assistant Professor in the University of Akron (US), Biomimicry Research and Innovation Center, in the Departments of Polymer Science and Biology.