Putting it all on the table

In 2015 four new elements were added to the periodic table. They remain – as do many of the heavy elements in the actinide group – deeply mysterious, something Dr Rafael Ferrer-Garcia wants to change. And what better way to do so than with lasers and a supersonic jet… 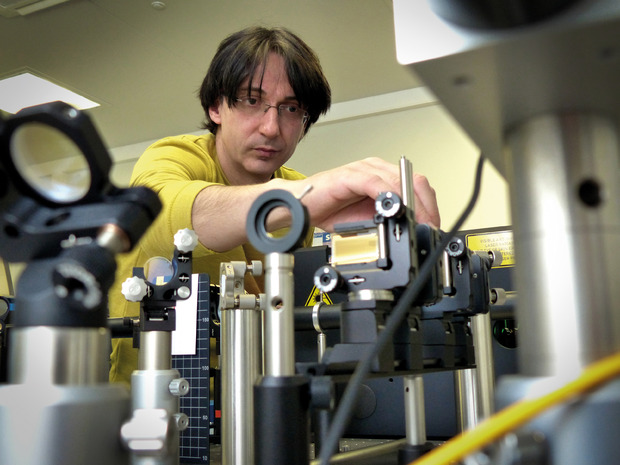 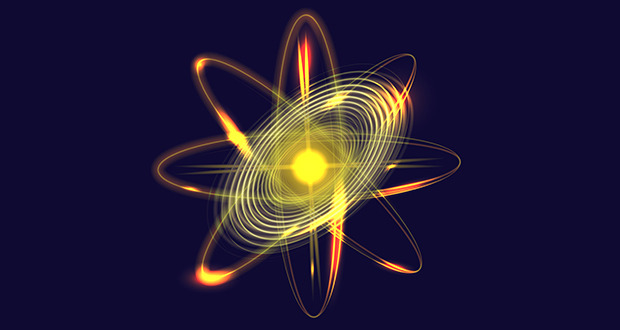 In 2015 four new elements were added to the periodic table. They remain – as do many of the heavy elements in the actinide group – deeply mysterious, something Dr Rafael Ferrer-Garcia wants to change. And what better way to do so than with lasers and a supersonic jet…

The actinide group is notoriously tricky to deal with – so why did you carry out this research? The fact that the vast majority of actinide and transactinide elements do not occur naturally, are difficult to produce artificially in weighable quantities – and have a short lifetime due to radioactive decay – made it very difficult to study this region. This is reflected in the current situation of optical spectroscopy experiments throughout the nuclides charts, which shows that once the actinide region is reached there are very few isotopes that have been studied. We wanted to demonstrate the feasibility and impact of a new experimental method based on laser spectroscopy of radioactive atoms seeded in a supersonic gas jet by measuring nuclear and atomic properties of short-lived actinides. A detailed knowledge of the atomic and nuclear properties of the actinides is crucial to help understand the formation of the heaviest elements. It will also answer questions about the end of the periodic table or the nucleosynthesis of super-heavy elements in stellar cataclysms.

What did you find? The results mainly show it is possible to apply a laser spectroscopy technique that combines both sensitivity and efficiency with high spectral resolution. These features make the in-gas-jet laser spectroscopy method unique and the best choice to perform high-precision studies of the heaviest elements. Besides the characterisation of the in-gas-jet method – an extension of the In-Gas Laser Ionisation and Spectroscopy (IGLIS) technique – we obtained nuclear ground-state properties of actinium isotopes, in particular of the semi-magic nucleus 215Ac with a half-life of only 0.17s, that were used to refine and test the predictive power of the most advance nuclear models.

Do you find it inspiring that we still know so little about certain sections of the periodic table? I guess finding out about the unknown is the driving force and main inspiration of any researcher. In the case of the periodic table we are dealing with the building blocks of matter, with the ultimate constituents of all we know, and do not know, in the Universe. With the advent of powerful particle accelerators we have seen an increase in the number of elements in the periodic table. Evidence of this extensive work is the recent addition of four new elements that now place the element oganesson (Og), with an atomic number of 118, as the heaviest member of the periodic table. Although there is little we can say about the properties of these super-heavy elements, we already know relativistic effects influence the electron orbits of the heaviest elements causing the periodicity of Mendeleev’s table, to become invalid. At this point, the most advanced atomic and chemical models must be improved, which requires that chemical and atomic properties of the heaviest elements have to be measured.

Deeper in the atomic nucleus of the heaviest elements, the subtle balance between electric and nuclear forces anticipate the presence of an “island of stability”, a region at the far end of the nuclear chart predicted by nuclear models where isotopes show a pronounced endurance against radioactive decay. This can result in the existence of longer-lived super-heavy elements. State-of-the-art nuclear models, however, fail to accurately predict the exact location of this island. Such models have to be improved and this can be done by confronting them with results of high-precision measurements in the actinide and trans-actinide elements. These are the kinds of abnormal properties of matter that are still to be discovered – and that may even show new physics. That is what makes my research very exciting.

Can you see any other future uses for this technique? The obtained efficiency and spectral resolution of our results demonstrate basic ground- and isomeric-state nuclear properties of heavier actinides and eventually super-heavy elements, as well as their atomic properties, can be determined to high precision. The in-gas-jet laser spectroscopy method also has far reaching consequences for the exploration of the refractory elements, so far hardly accessible to high-resolution laser spectroscopy techniques. In addition, the highly selective ionisation enables the production of high-quality, high-purity isotopic and isomeric radioactive ion beams that can be used for other applications in nuclear physics, chemistry and astrophysics, as well as in atomic physics.

What are the next steps that you will take? We are currently commissioning an offline laboratory at the University of Leuven where a full characterisation and optimisation of the method will be carried out. Results from the first test on the formation and properties of supersonic jets using a de Laval nozzle, a miniaturised version resembling the exhaust of rocket engines, placed at the gas cell exit, already show promising expectations for the future performance of the IGLIS technique applied to short-lived atoms.

We are also working in collaboration with other research groups on new IGLIS setups that will be installed at present and future particle accelerators facilities. In particular, we are closely involved in the designed and commissioning of the REGLIS (Rare Element in Gas Laser Ionisation and Spectroscopy) setup that will be coupled to the future high-power particle accelerator SPIRA2 in GANIL, France.  Here, we will apply our laser spectroscopy technique on the actinide and eventually on the transactinide elements, as well as on other isotopes with low production rates that are not accessible at present online facilities. Furthermore, we will also provide the users of this facility with high-purity isotopic and isomeric beams for other radioactive beam applications. 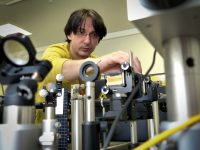 Dr Rafael Ferrer-García works at KU Leuven in Belgium, with most of his research focused on the spectroscopy of short–lived isotopes.