Regenerative medicine offers hope to millions of people worldwide and involves some of our most advanced biomedical science… and some apples. Here, Carlisle Baker-Jackson brings us the most promising and incredible efforts we have yet seen to grow tissues and organs 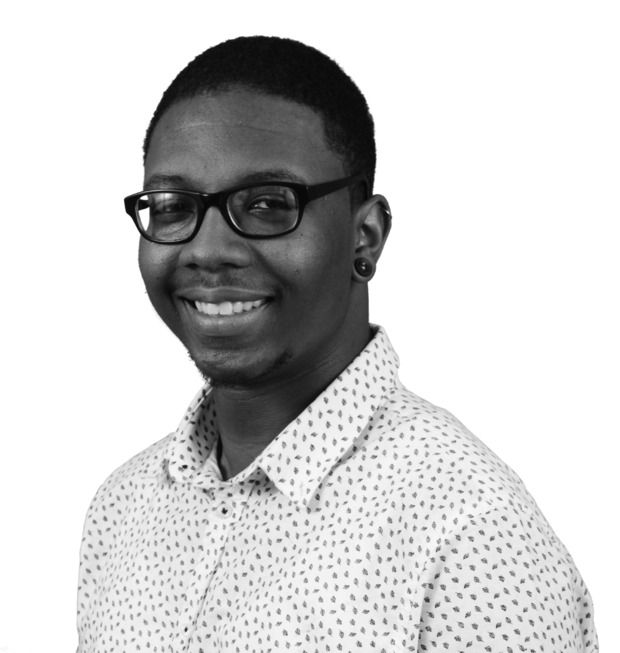 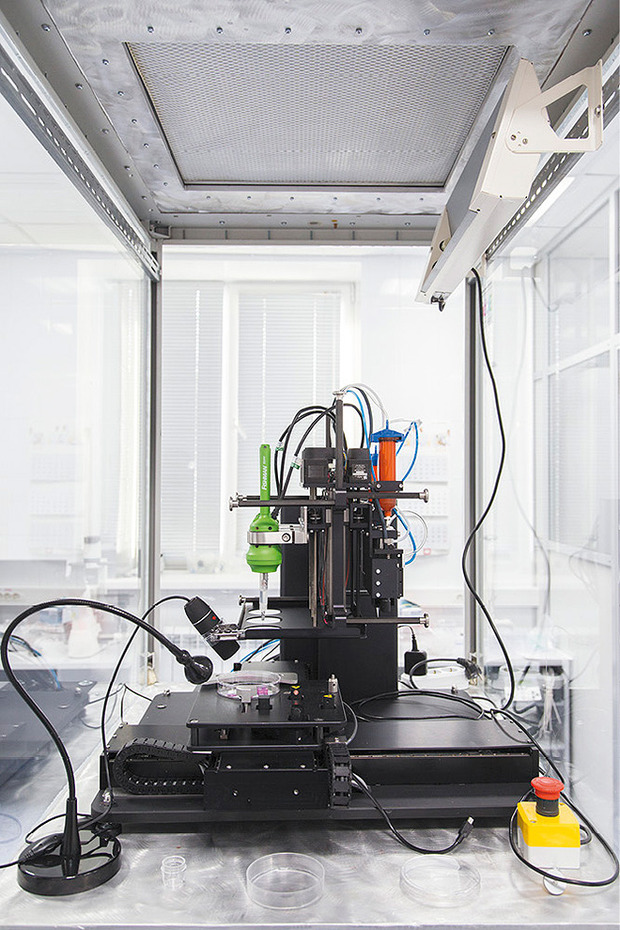 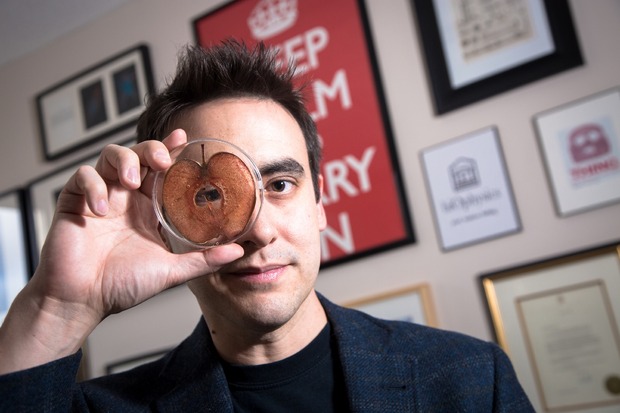 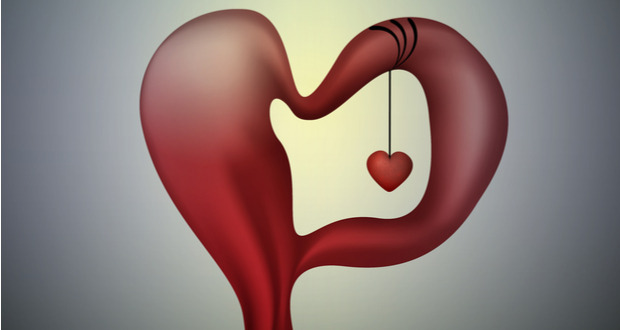 Regenerative medicine offers hope to millions of people worldwide and involves some of our most advanced biomedical science… and some apples. Here, Carlisle Baker-Jackson brings us the most promising and incredible efforts we have yet seen to grow tissues and organs

Cell, tissue or organ regeneration is, arguably, an idea that dates back millennia.

Prometheus, for example (albeit a distinctly gruesome one), was the Titan chained to a rock only to find his liver being eaten on a daily basis by an eagle. By necessity therefore, this Greek mythological deity had the capability to grow back the targeted organ overnight. Now, of course, we know that the liver is the only organ in the human body capable of regenerating itself spontaneously – even after serious injury. But that isn’t all we know – not by a longshot.

The modern day definition of regenerative medicine is attributed to Dr William Haseltine, a researcher well known for his work on genomics and HIV/AIDs. He suggested1 regenerative medicine was an approach to therapy that “employs human genes, proteins and cells to re-grow, restore or provide mechanical replacements for tissues that have been injured by trauma, damaged by disease or worn by time offering the prospect of curing diseases that cannot be treated effectively today, including those related to aging”.

Areas such as stem cell research, artificial organs and macrophage introduction also fall under the definition of regenerative medicine. The most well-known example of regenerative medicine is probably stem cells. Haematopoietic stem cells found in umbilical cord blood, for example, are used to treat childhood blood cancers. Adult stem cells can now be induced to become specialised stem cells (iPSCs) which are capable of being propagated indefinitely and, thanks to their ability to transform into any cell type, show incredible promise when being used to repair cells lost to disease or damage throughout the body.

Now researchers have the potential ability to grow various types of cell, the regenerative medicine community has naturally turned its attention to building whole organs. The many stem cell breakthroughs have allowed teams to seed them onto a vast range of natural, synthetic, biodegradable and permanent scaffolds that can then be placed into the body.Eelectrospinning, for example, is one method used to create these scaffolds – even though it was actually developed over a century ago2. The technique utilises high voltage to draw very fine fibres that dry and solidify forming nanometre-scale strands. Additive manufacturing, also known as 3D printing, can then be used to build layers from the strands until the final design is achieved.

Although initially used for creating just the scaffolds, additive manufacturing has also been used for another technique – 3D bioprinting. Incredibly, this technique alternates between printing a scaffold and a solution of live cells, known as bio-ink, inside that scaffold.

Using this approach, scientists at the Wake Forest Institute for Regenerative Medicine in North Carolina, US, announced in early 2016 they had successfully implanted bioprinted ear, bone and muscle structures3 into mice. Researchers at the Institute have been working in this field for over a decade – back in 2006 they successfully transplanted seven, non-bioprinted bladders grown from the patients’ own cells. The researchers took cells from the malfunctioning bladders of seven children with spina bifida and grew them on a biodegradable synthetic polymer and collagen mould. A separate layer of bladder urothelial cells were grown on the inside of the mould to create a working bladder4. The Holy Grail, so to speak, of 3D bioprinting is the production of complex organs. Although ‘simple’ tissues have been produced to great levels of sophistication, it is larger organs that are more troublesome. “It is complex solid organs such as the liver and kidney that will be most difficult to print,” says Professor Anthony Atala, director of the Wake Forest Institute. “These organs will require millions of cells and because they have high oxygen requirements, we must find ways to supply them with oxygen until they integrate with the body.”

The bioengineers at Wake Forest have designed their own integrated tissue-organ printer (ITOP) which can fabricate stable, human-scale tissue constructs of any shape3. This was the same printer used in 2016 that enabled them to create ear, bone and muscle structures. Bioprinting isn’t limited to just academia – companies such as Organovo are working on refining bioprinting human tissues and organs for research. Founded in 2007, their products include 3D printed livers, kidneys, and skin. They are aimed at companies exploring the effects drugs have on specific organs and could potentially reduce the need for animal testing. In 2015, they signed a deal with L’Oréal, allowing the company to understand more about its processes to produce skin at scale, prompting hopes that the technology could be used for more than cosmetic testing – possibly even burns research. Two weeks later they announced another deal with the pharmaceutical giant Merck, allowing the company use of their ExVive3D liver. The agreement also enables Merck to process other different organ models using Organovo’s 3D bioprinting technique. It is clear then, that the technology and know-how to grow tissues and organs is advanced. The task now is to make that tissue as functionally equivalent to the real thing as possible. 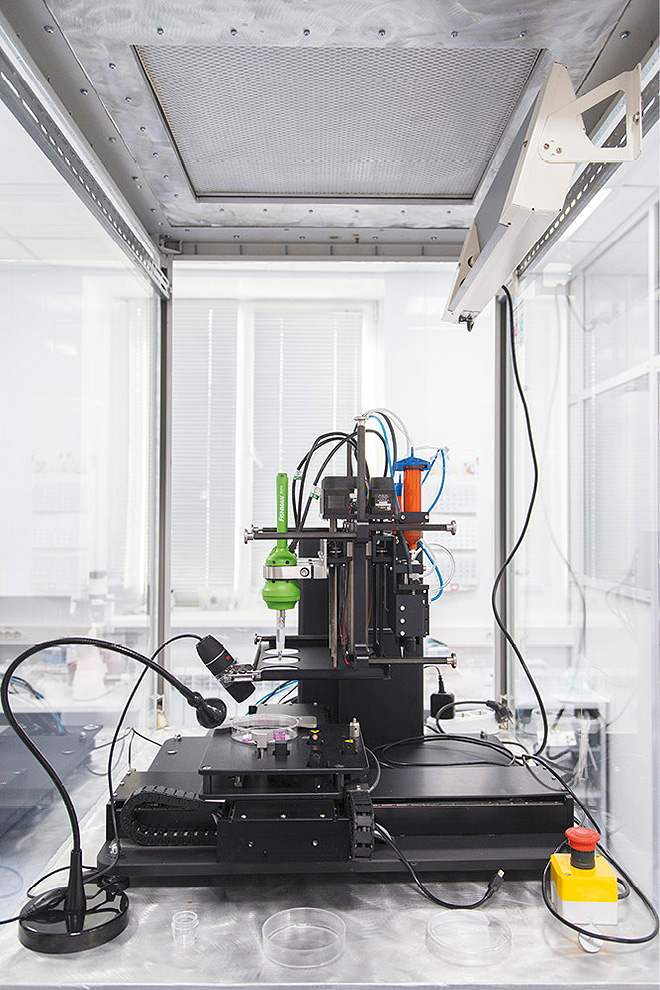 A paper published in Science Robotics5 early this year, explores the idea of using humanoid robots to enable better growth of replacement tendons and muscles. Dr Pierre-Alexis Mouthuy and Professor Andrew Carr, both authors of the study and from the University of Oxford, suggest musculoskeletal robots could assist in growing musculoskeletal tissue grafts for transplantation. Currently, the use of robots in this field is rudimentary, with bioreactors applying simple tension or compression forces to engineered tissues. These bioreactors are usually composed of culture chambers with tissue scaffolds to enable cell growth paired with a linear actuator – machinery that creates a back and forth motion. As the technology develops though, these bioreactors will provide multidirectional stresses in order to adapt the type of stress exerted. In essence, they will very closely resemble the actual human body, and the cells and tissue is cultured.

“Musculoskeletal humanoids offer structures that are particularly interesting to grow tissues such as tendon and muscle grafts,” says Dr Mouthuy. “It is definitely possible to imagine that future developments of humanoids may also enable the growth of other and more complex tissues and organs.” There are a number of requirements to be met before these humanoid-bioreactors can work efficiently. But, what’s most striking about this study is it’s more than theory – the authors say that it is now both technically possible and scientifically pertinent to explore in greater detail the role humanoid robots could play in regenerative medicine. Robots already exist, capable of moving using pneumatic artificial muscles6 and there remains the possibility of pairing these with cell-based actuators7, creating the robots dreamt of by Mouthuy and Carr.

Not all paths in regenerative medicine involve the use of machinery or robotics though – drug repurposing has its own role to play. Scientists from Kings College London found using a drug designed to treat Alzheimer’s disease enhanced the natural ability of teeth to repair themselves. The research published in Scientific Reports8, details how researchers inserted a biodegradable collagen sponge soaked in tideglusib into mice teeth, the teeth rebuilt themselves over time. Professor Paul Sharpe, who led the study, explains: “The drug stimulates the Wnt signalling pathway that is required for stem cell mobilisation. We are aiming for human trials within the next 18-24 months which will likely involve a range of cavity sizes. My lab has been working for a number of years on a project we call BioTooth that aims to develop a cell-based implant that grows into a complete tooth.” Previous research carried out by Professor Sharpe’s team discovered tideglusib stimulates stem cells in the centre of the tooth, triggering them to develop into specialised tooth cells – odontoblasts – as well as quickening dentine production. It is hoped simple, rapid natural tooth repair could potentially provide a new approach to clinical tooth restoration.

The next method is perhaps the most intriguing. Across the Atlantic, at the University of Ottawa, Canada, scientists have discovered fruit and vegetables can work as effective scaffolds to grow cells. Scientists under the watchful eye of Professor Andrew Pelling are working on what has been labelled ‘physical biohacking’. Instead of investigating chemical and genetic manipulation, they are instead looking at cell behaviour in different physical surroundings. One of their most widely known examples is that of an apple scaffold in the shape of an ear, populated with human epithelial cells. Ears have become something of a poster boy for tissue regeneration. They are very much the tissue engineering equivalent of ‘Hello World’ in computer coding – displaying proof that the computer programmer understands the new language they are using. 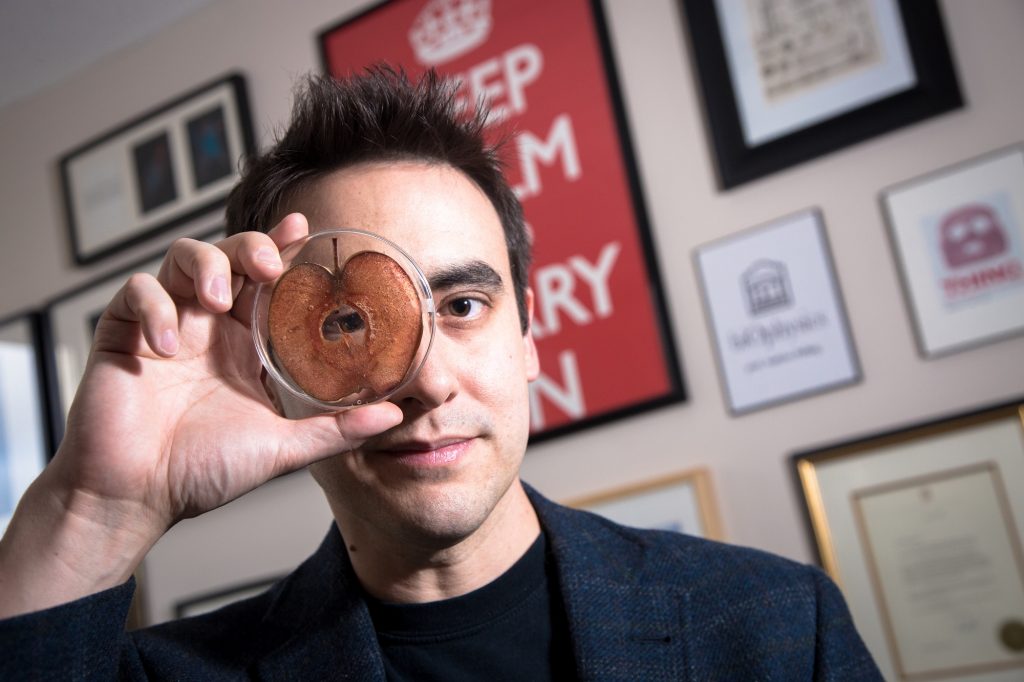 The simplicity, low costs and open source aspect of physical biohacking seems to have captured other scientists’ attention – indeed Professor Pelling even presented a TED talk on this last year. But where did this approach come from? Professor Pelling says: “At our lab we let students ask any question and we find that this freedom promotes creativity. In 2013, after watching Little Shop of Horrors, where there is a carnivorous plant, a student asked if we could grow this in the lab. From this, we began a hypothesis questioning if we could decellularise a leaf and enable it to open and close like a mouth. A student in the lab was struggling to remove the waxy coating off a leaf and saw someone else eating an apple and it went from there really.” The method is rather simple as well – take an apple, slice it and wash it with boiling water and detergent to decellularise it. In three steps, you have the scaffold for your cells to grow on. Even more interesting is what happens if you place it in a mouse’s body. In two months, the scaffold has been accepted by the body, infused with surrounding cells, before a network of blood vessels are then formed.

Professor Pelling continues: “Without 3D printing, chemical or physical engineering, we found that the cellulose scaffold promotes blood vessel growth and meets many of the requirements for bioengineering. Getting blood vessels to grow into your biomaterial is challenging and it happened spontaneously.” There are two potential reasons offered by Professor Pelling, the first being that cellulose is very inert and animals don’t have an enzyme to break it down. Secondly, and this is just speculation at the moment, is that immune cells travel to the scaffold and deposit matrix proteins which then encourage blood vessel formation. There are a now several papers on tissue engineering applications using these scaffolds currently in, or being prepared, for peer review. And it’s not only apples that have shown promise in regenerative medicine. The lab has also found a potential use for rose petals in skin grafts.

Advances in technology and science are constantly pushing the boundaries of regenerative medicine. From rebuilding teeth, to creating muscles better suited for transplantation, to assisting the regrowth of spinal nerves, regenerative medicine is advancing at such speed it is no longer wishful thinking. 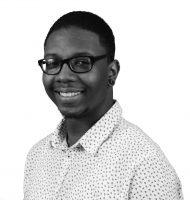