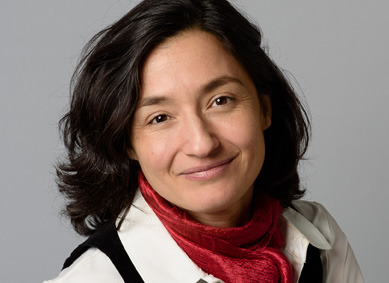 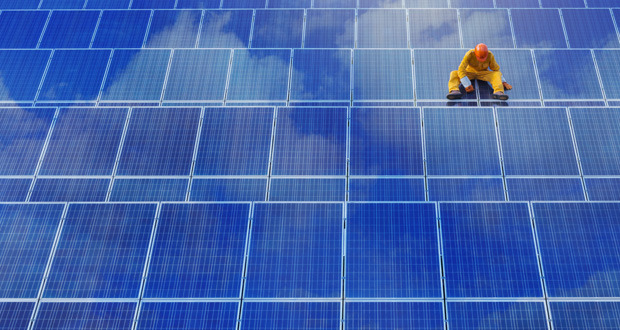 The problem of ‘hot electrons’ mean that photovoltaic cells only harvest part of the sunlight they receive. if we could harvest this excess energy, we could double the efficiency of solar cells says Professor Maria Antonietta Loi…

As a professor of Photophysics and Optoelectronics, I am interested in all processes that convert light into electricity, or the other way round. The need to phase out fossil energy sources and replace them by renewables means that a lot of work is done to enhance the efficiency of solar panels. Currently, commercially available silicon-based panels convert around 20% of sunlight power into electricity. As the sun deposits about 1000 Watts per square meter on the surface of our planet, this means solar panels can produce about 200 Watts per square meter.

Silicon based photovoltaic cells where demonstrated in 1954, practical commercial systems have been around for about 50 years. Over time, production of these solar cells has become extremely efficient, reducing the price of solar power considerably – something also resulting from the mass production stimulated by the impulse given by several European governments. There is not much room to decrease the price further as, at the moment, the largest portion of the price is devoted to the electronics and not to the solar panel. The only viable strategy is to further increase the conversion efficiency. In the lab, silicon single crystalline solar cells with a 25.8% conversion rate have been made.

The theoretical limit for any single active material converting light into electricity is about 33%. This is in part a consequence of the Goldilocks principle. Free electrons are generated by promoting electrons into the first available empty conduction state, where they can be transported out of the material. The energy is supplied by the absorption of photons, which have a quantized energy content, which depends on the wavelength (i.e. their color). If their energy is too low, the electrons will not budge, and the photons will fly through the material (transmission).

But if photons have too much energy, electrons will move up above the first available band. This creates an extremely instable situation: these electrons need to rapidly dissipate their extra-energy in the form of phonons, vibrations, which heats up the material. These are so called ‘hot electrons’. Only if the energy content of the photons is just right, the electron will be sent from the ground state to the bottom of the conduction band where it can be harvested.

The energy required to free an electron (called the band gap) depends on the material used. Thus, by combining different materials, photons with different energy contents can be harvested. The current record for such multi-junction photovoltaics is around 46% efficiency. But this requires complex devices with different layers of material, the so-called tandem solar cells. These devices are too expensive for use in civil applications, but can be found on, for example, satellites.

Quantum dots and perovskites Many different photovoltaic materials are under investigation, in the hope of finding one that has both a high efficiency and a low production cost. For example, organic solar cells have been around for over two decades, and their efficiency increased from around 2 to almost 12%. Several groups at the University of Groningen have been very active in organic semiconductors and have been main actors in the development and understanding of these class of semiconductors.

Recently, however I have been focusing on two new classes of hybrid semiconductors, the colloidal quantum dots and perovskites. Quantum dots are clusters of some 1,000 atoms which act as one large 'super-atom'. The dots, which are synthesized as colloids, i.e. suspended in a liquid like a sort of paint, can be organised into thin films with simple solution-based processing techniques. These thin films can turn light into electricity. The advantage of these dots is that their band gap can be easily tuned by altering their size. The efficiency of quantum dot based solar cells has increased from around 2 to over 13% over the last eight years.

Even more spectacular was the increase in efficiency for hybrid perovskite cells. The first good devices were published in the literature in 2012 and now, the record efficiency is already 22.7 %, above the efficiency of multicrystalline silicon solar cells, which is one of the most common technology in home installations.

Perovskites are a class of materials with a typical crystal structure which was first discovered in the mineral calcium titanium oxide (CaTiO3). All perovskites can be described by the chemical formula ABX3. In the X position, anions form an octahedron, while in the A position cations form a cube around them, while a central cation takes the B position. In my lab we study hybrid perovskites, which contain organic cations in the A position.

So far, the perovskites we have studied contain lead, which is toxic. Recently however, we have used a tin-based perovskite, formamidinium tin triiodide, which is expected to be less toxic. While studying its properties, we observed something odd in the photoluminescence emission spectra. The spectra show a symmetric shape around a long blue tail of photons. As in all materials, hot electrons are generated in our hybrid perovskites, when illuminated with photons with energy larger than the band-gap. The recombination of hot electrons with holes in the valence band will produce an asymmetric spectrum and the blue tail, but as soon as they have lost their extra energy, the spectrum will become symmetric.

In our experiments, the spectra showed that the energy loss in tin-based hybrid perovskite was slower than usual: a matter of nanoseconds, rather than pico- to femtoseconds. This was quite an exciting observation, as long-lived hot electrons are something that everybody in this field is looking for. In theory, a longer life span would make it possible to harvest the excess energy and this could double the maximum efficiency from 33 to 66%.

Long-life electrons Finding these long-lived hot electrons is quite exciting, but it’s only the first step towards higher efficiencies. The next step is to understand the physics: why does this happen in tin-based hybrid perovskites? With that knowledge, it might be possible to design materials with even longer living hot electrons. And of course, we need a way to harvest these hot electrons at their high energy level. This means combining other materials with our perovskites. Quantum dots, with their tunable band gap, are an obvious choice.

The result could be a single device that would harvest the Goldilocks electrons in the perovskite, but also the ones with excess energy in different quantum dots. Both perovskites and quantum dots can be deposited from a solution, like an ink, therefore they can be fairly cheap. This could promise highly efficient solar cells which are easy to make.

But that is still far away. For now, we would very much like to build a device that can harvest some hot electrons. Although this is a theoretical possibility, it has never been done. So a proof of principle would be a huge breakthrough.

Despite the promises of hybrid perovskites, it is unlikely that they will replace silicon panels any time soon. There has been a huge investment in production facilities for these panels, and the entire infrastructure is geared towards silicon. So perovskites need to be considerably better if they are to replace silicon. But there could be interesting niche markets for perovskite solar cells. As mentioned, they are produced from a kind of ink, so you could print these solar cells on surfaces. Also, the color could be adapted, and this means you could make solar panels in different colors that blend into the landscape and architecture. They can even be made semi-transparent.

Hybrid perovskite solar cells could become an interesting parallel market, alongside silicon. We could even coat silicon panels with our perovskite ink and create a dual junction device. Many colleagues around the world are busy with these concepts.

But most of all, it is a fascinating scientific challenge for our lab to find out why the hot electrons are so long lived in tin based perovskite. It is only by really understanding the materials we work with that we can make the most of them!

Author: Maria Antonietta Loi is professor of Photophysics and Optoelectronics at the Zernike Institute for Advanced Materials of the Faculty of Science and Engineering, University of Groningen, the Netherlands.