The complex tragedy of deforestation 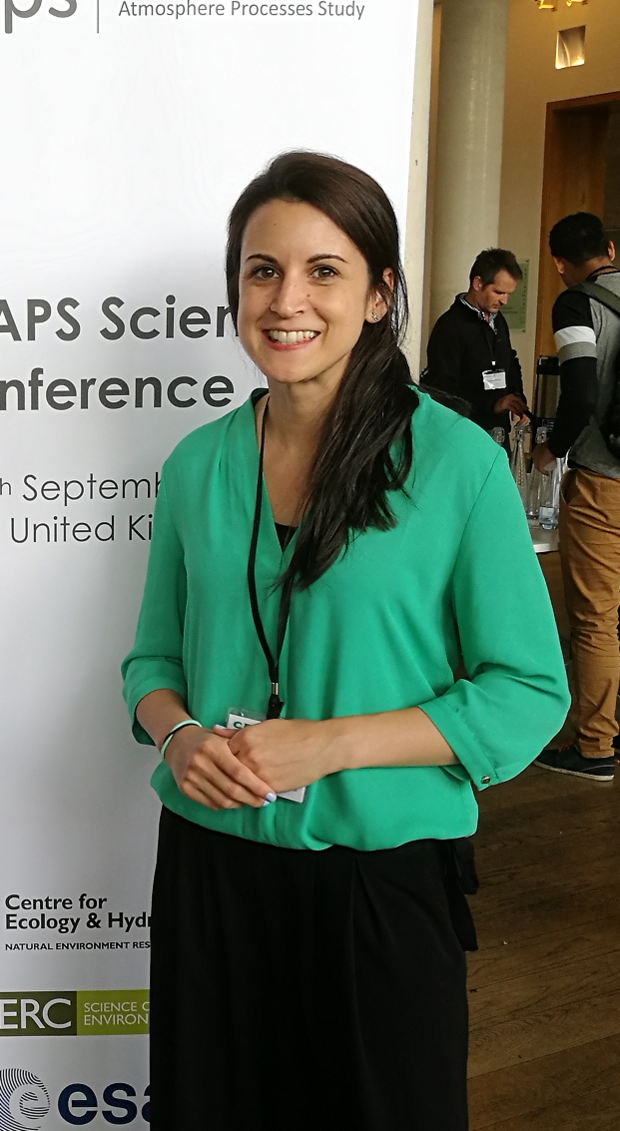 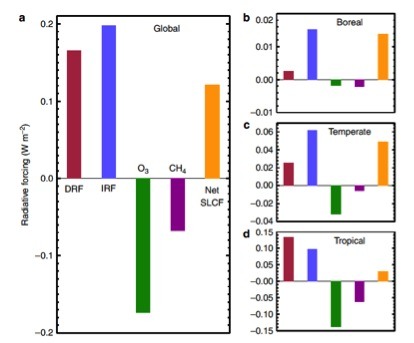 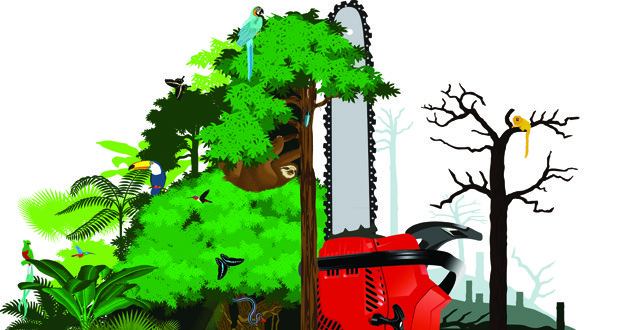 As well as removing CO2 from the atmosphere, forests also have another, less obvious, influence on the Earth’s climate. And, as deforestation continues a pace, we had better make sure we understand this says Dr Cat Scott

We know that trees and forests affect the climate in a variety of ways. They’re constantly taking carbon dioxide out of the air and storing it in their roots, trunks and branches as they grow. Some of this carbon is released back into the air as the plants respire, but the overall effect is to remove CO2 from the atmosphere.

This reduction in CO2, a greenhouse gas, acts to cool the climate. When trees are cut down, we lose their ability to draw down CO2 – worse still, if they are burned the carbon they have carefully locked away will be released back into the air.

But in terms of the climate, that’s not all forests are doing. The dark colour of trees means that forested parts of the Earth absorb more of the sunlight that hits them. The impact of trees’ dark colour is most pronounced in the snowy regions of the planet where the contrast between white snow and dark green trees is stark. This is the “albedo” effect and the result is that forests at high northern latitudes exert a warming effect on the climate.

This means that the impact a forest has on the climate depends upon where it is on the planet. In particular, whilst forests in the tropics are thought to be strongly cooling the planet, forests in the snowy northern latitudes are having a slight warming effect.

Most previous assessments of the climate impacts of deforestation have focused on the amount of carbon dioxide that would be emitted, or changes to the way the land-surface exchanges energy and water with the atmosphere. In our recent study, published in Nature Communications1 we explored an additional impact that forests are having on the composition of the atmosphere. As well as taking in carbon dioxide and giving out oxygen, trees emit other gases that take part in complicated chemical reactions.

forests in the tropics are thought to be strongly cooling the planet, forests in the snowy northern latitudes are having a slight warming effect

These gases are called biogenic volatile organic compounds (BVOCs) and they are responsible, among other things, for the characteristic smell of pine forests. The compounds are organics hydrocarbons and it takes plants quite a lot of energy to make these compounds, and it’s not completely clear why they do it. Some suggest that they are used for plants to signal to one another, to protect against various stresses (attack from pests, high temperatures, or ozone damage), or to inhibit other competing plants from establishing nearby.

Once emitted into the air, these gases have a number of effects. They take part in complex atmospheric chemistry that can ultimately lead to an increase in the concentration of ozone and methane, which are both greenhouse gases. As with carbon dioxide, an increase in the concentration of these greenhouse gases will have a warming effect on the climate.

A sticky situation We also think that BVOCs react and convert into more complex “sticky” gases that are able to clump together and form nanometre scale particles – aerosol ­– in the atmosphere. The exact identities of the molecules that have the potential to form particles are still under investigation, but it is thought that these biogenic gases are one of the important ingredients.

Although small, these particles are incredibly important for the climate because they influence the amount of the Sun’s energy that reaches the Earth’s surface. They do this in two main ways – firstly by simply reflecting some of the Sun’s energy away (we call this a direct effect) or by brightening clouds (we call this an indirect effect). This second, indirect, effect occurs because once particles in the air grow to about 100 nanometres in diameter they are able to act as a nucleus for cloud droplets to form around (these are known as cloud condensation nuclei). The more cloud droplets there are in a cloud, the brighter it appears and the more of the Sun’s energy it will reflect away. It is thought that the presence of particles in the atmosphere is masking some of the warming that would have occurred as a result of rising greenhouse gas levels over the past century. So, by emitting BVOCs and contributing additional particles, forests are able to have a cooling effect on the climate.

Greenhouse gases like ozone and methane that don’t remain in the atmosphere for quite as long as CO2, together with particles, are collectively referred to as short-lived climate forcers (SLCFs). We know that forests are having some warming and some cooling effects due to short-lived climate forcers, but how do they balance out – and what does this mean for deforestation?

Get shorty To explore this we used a series of complex computer models that represent different parts of the Earth system. First we use a model that simulates the surface of the Earth and the behaviour of different kinds of vegetation. We want to look at the impacts of deforestation so we do something very simple and convert all of the model’s forests into grass. This is not to suggest that we think this is likely to happen, but it helps us to understand how big the impacts are. Using algorithms we can then calculate how much this conversion of trees to grass affects the emission of BVOCs.

We then take that information and pass it along to a model that tracks the movement and transformation of gases and particles in the atmosphere. This is a bit like dividing the air above you into a series of big cubes, we need to tell each cube what sort of gases and particles are going in, work out what happens to them when they’re inside, and consider where they go next. We hundreds of use equations to work out how the particles are processed within the cube – which address many factors: do they grow bigger and then move on to the next cube? Is it raining, so the particles are washed out of the air before they can get to the next cube?

We found that by reducing the emission of BVOCs, deforestation reduced the levels of ozone and methane, thereby having a cooling effect on the climate (green and purple bars in Figure 1). But, the reduction in BVOCs also reduces the number of light-reflecting and cloud-brightening particles, which has a warming effect (red and blue bars in Figure 1). When we add the impacts of all the short-lived climate forcers together (orange bars in Figure 1), we see that the warming effect due to a reduction in particles dominates. The warming and cooling effects of these gases are most closely balanced in the tropics (bottom right panel of Figure 1) which is where most deforestation is occurring – suggesting that we really need to understand more about the strength of these impacts. 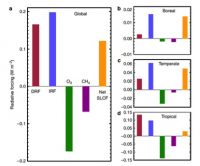 To understand the strength of the impacts due to changes in short-lived climate forcers, we need to compare them to the other effects of deforestation, such as carbon dioxide emission and change in surface albedo. We used estimates from a previous study to guage how much carbon dioxide would be emitted in each of our deforestation scenarios and a computer model to estimate the effect of changing from dark trees to lighter coloured grass. When we add these effects together, we find that including the effects of short-lived climate forcers increases the warming associated with global scale deforestation by about 10%.

Scientists have known for a long time that trees emit reactive gases to the atmosphere, but the impact of these gases has not been as widely studied as the other effects of deforestation. We need to understand these complex effects on the composition of the atmosphere to get a clearer picture of the impacts of deforestation and to formulate land-use change policy for the future.

Dr Cat Scott is based at the Institute for Climate and Atmospheric Science, School of Earth and Environment, University of Leeds