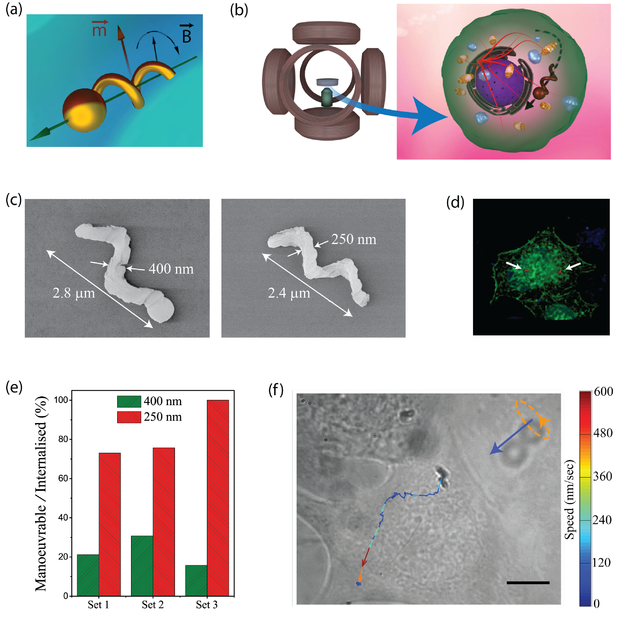 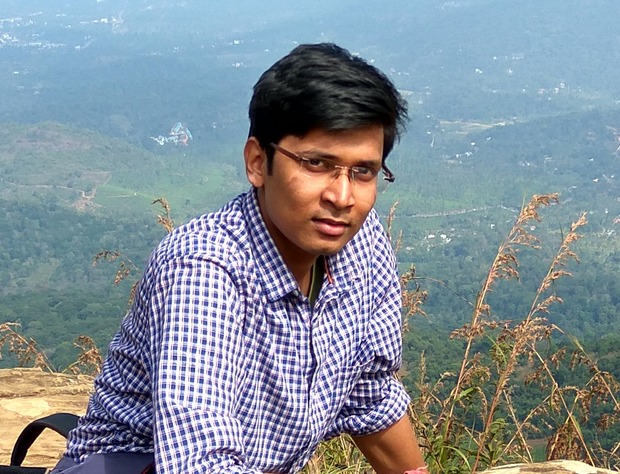 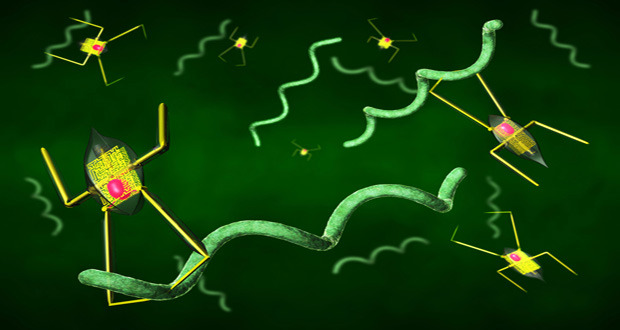 When many still think that swarms of medical nanobots in the body are the stuff of science fiction, one group is going further and placing individual nanomotors actually within human cells. Malay Pal adopts his finest booming 50’s sci fi voice to catch us up with the incredible frontiers of nanobiology

Nanobiology is a field of growing significance due to the tremendous potential of nanomachines to carry out tasks in living systems. Applications such as detection and treatment by targeted drug delivery in diseases like cancer, in microsurgery and environmental remediation have put the nanomachines in spotlight in the past few years.

Taking inspiration from the “fantastic voyagers” as first proposed by Professor Feynman, the team lead by Professor Ambarish Ghosh at the Centre for Nano Science and Engineering at Indian Institute of Science, Bangalore have demonstrated controlled maneuverability of nanomotors in living cells.

Nanomotors are extremely small devices that can be maneuvered by remotely powering them using various sources, such as magnetic, acoustic or optical fields. Cellular organelles – the cytoskeletal network and a host of biomolecules – make the cytoplasm of a cell a very crowded environment. A small machine voyaging through such a milieu is, in itself, a fantastic concept.

The precise motion of nanomotors inside a human cell opens up exciting opportunities for biological applications. Delivery of cargo to intracellular locations, diagnosis by sensing molecules, probing of the intracellular environment are just some interesting functions that a nanomotor can perform. The controlled motion of an internal probe in a living cell gives us the ability to deliver cargos to specific organelles. The cell can be internally probed, at specific locations, to map the physical properties.

In this study, we fabricated helical nanomotors, of two sizes, 2.8m long and 400 nm wide and 2.4m long and 250 nm wide, by using a technique called glancing angle deposition (GLAD). These helical nanomotors – which are made of magnetic materials – are taken up by the cells after incubating them together for a day in a petri dish. Post incubation, fluorescently labelled HeLa cells (a cervical cancer cell line), were imaged with a confocal microscope and a 3D reconstruction of the cell was made, wherein the motors were seen to be confined within the Z- plane of the cell.

On entering the cell cytoplasm, the nanomotor encounters a highly complex, heterogenous environment. A rotating magnetic field is generated by a triaxial Helmholtz coil, built around an optical microscope, which drives the motors inside the cytoplasm, with precision. The magnetic field, which is widely used in biomedical imaging techniques such as MRI, is known to be completely benign to living systems. By application of magnetic fields of magnitude as low as 80 Gauss, the motors were able to undergo rotation and net translation inside the cell. In some cases, it was seen that the motors responded to the field with rotation in place and no net translation. This loss of response, though initially thought to be caused by damage to the magnetic layer, was later found to be because of their size and tendency to stick to the intracellular milieu. The smaller nanomotors were found to be more compatible with the porosity of the cellular cytoskeletal network, and thus were more responsive in a larger number.

The motion and speed of the motors changed in different regions of the cell, due to the highly dynamic nature of the cytoplasm. The heavily crowded cell cytoplasm can cause jamming effects in the path of the motor. As such, the nanomotors often had to be detoured from their path, in effect to navigate around these intracellular roadblocks. The hydrodynamic pitch of the helical motion showed strong dependence on the directionality.

Motion of nanomotors was also observed in two other cell lines – BAEC (Bovine Aortic Endothelial Cells) and HEK (Human Embryonic Kidney). Instances of reorganization of the intracellular mileu were observed in HeLa and BAEC cells, as the motors passed through the cells. In some cells, the motors exhibited back and forth motion along the same path, on the reversal of the direction. Exquisite control in manoeuvrability was achieved by the smaller (2.4m) motors, as they were driven in trajectories to depict the letters “N” and “M” to represent the word “NanoMotor”. 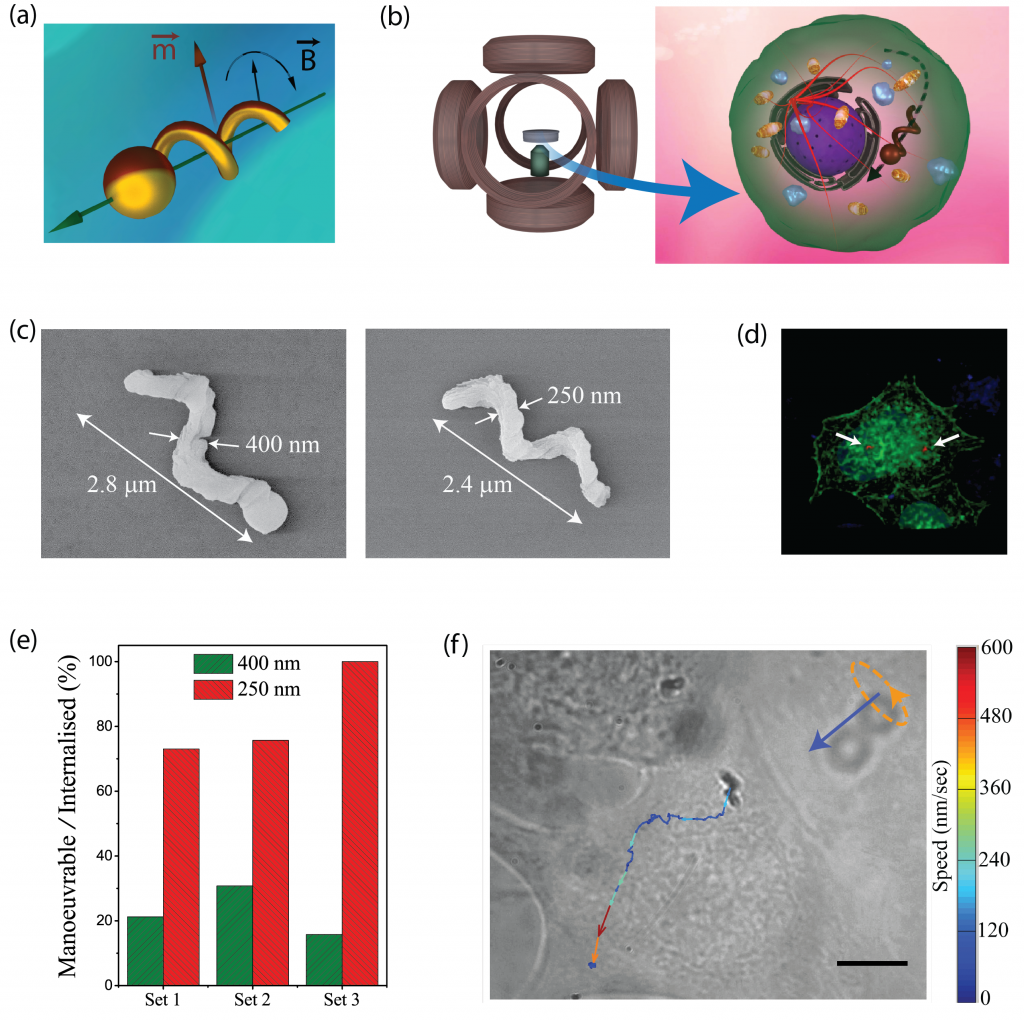 Design and manipulation of helical nanomotors inside cells. (a) Schematic of the actuation scheme, where the helix rotates in sync with the magnetic field. The rotation results in translation of the helical nanomotor. The helical shape is predominantly made of SiO2 (yellow), with a thin film of magnetic material (here iron, brown) deposited on the SiO2. (b) Schematic of the experiment: Petri dish containing the cells and the helical nanomotors are placed in a triaxial Helmholtz coil built around an optical microscope. The motion of the motors travelling through the intracellular space is recorded and analysed. (c) SEM image of nanomotors. Left panel: larger: 400 nm × 2.8 ?m, right panel: smaller: 250 nm × 2.4 ?m. (d) Single HeLa cell containing two nanomotors, a snapshot of a 3D rendered video (movie M1) made from a stack of confocal images. Blue, nucleus; green, actin filaments and red, nanomotors (pseudo coloured). The scan region dimensions were 64 µm x 51 µm x 7 µm. (e) Ratio of manoeuvrable to total number of nanomotors that were internalized by the HeLa cells, for the two designs. Results from multiple experiments show higher manoeuvrability with the thinner motors. (f) Vector plot of speed of a nanomotor moving inside a cell (BAEC), scale bar 5 µm. Also shown is the intended direction of the motor as defined by the rotating magnetic field (top right corner). (Source: M. Pal, N. Somalwar, A. Singh, R. Bhat, S. M. Eswarappa, D. K. Saini, A. Ghosh, Adv. Mater. 2018, 1800429. Copyright Wiley-VCH Verlag GmbH & Co. KGaA. Reproduced with permission.)[/caption]

In the past, nanomotors driven by acoustic fields have been moved inside living cells. However, the application of an acoustic field detaches the cells from the substrate and may even cause stress to the cell and so the magnetically driven nanomotors studied here provide a crucial advantage. They can be internalised in cells and manipulated in attached cells as well as suspended state. We could establish the health of the cell by using fluorescent dyes that selectively stain live and dead cells. The cells stayed viable as the motor moved through them throughout the entire duration of the experiments.

Helical propulsion is more efficient than using gradient fields and the dynamics of helical motors is well understood. The precession motion of the helical nanomotors may make it possible to estimate the local rheological properties in the cell, which could be useful in delivering payloads to specific locations in the cytoplasm.

We believe that this technology could have a significant impact on medical interventions of the future. Because of the development of controlled propulsion in intracellular environment, it is now possible to deliver payload to a predetermined site inside the cell. It has been shown previously (by Professor Ghosh’s lab) that these nanomotors have the ability to trap, transport and release submicron particles with high precession and speed when integrated with plasmonics, a special kind of light matter interaction.

Apart from applicability in targeted drug delivery, these tiny nanomotors are also capable of sensing the surrounding medium. Our group a few months back published another paper in Advanced Functional materials, where we demonstrated how to measure fluid viscosity from dynamics of the nanomotors. One of the important aspects of this study is that the nanomotors sense fluid viscosity without any further modification or chemical functionalization. This is a huge advantage as it is now possible to couple other smart features to the nanostructures.

In conclusion, these tiny nanorobots which can be maneuvered inside a living cell hold a great promise for future therapeutics. They have great potential for targeted drug delivery, as well nano-sensing and hence scientists are trying to use this technique as an alternative to conventional cancer treatment. Of course it is true that these results are still in the laboratory and need a lot of further research to take to clinical environment. None the less Professor Ghosh’s lab and few other groups spread around the globe are working hard to make this possible. 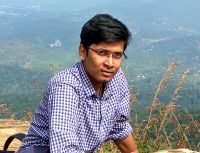