Cloudy with a chance of biology... 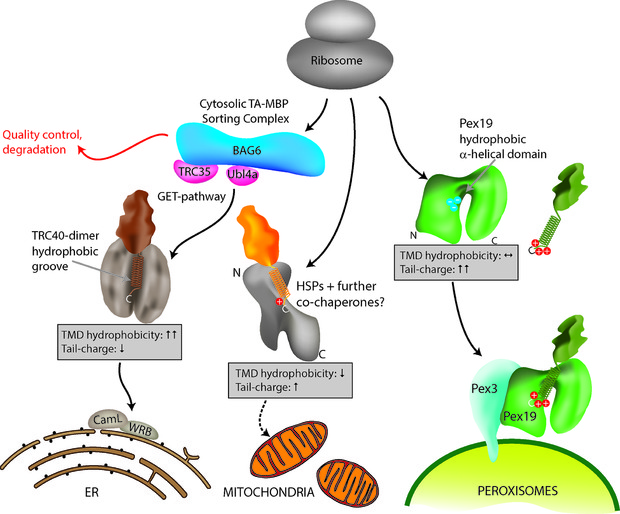 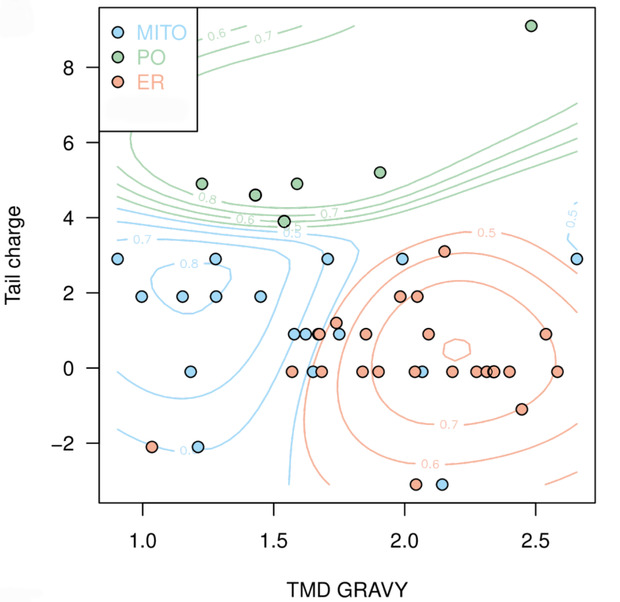 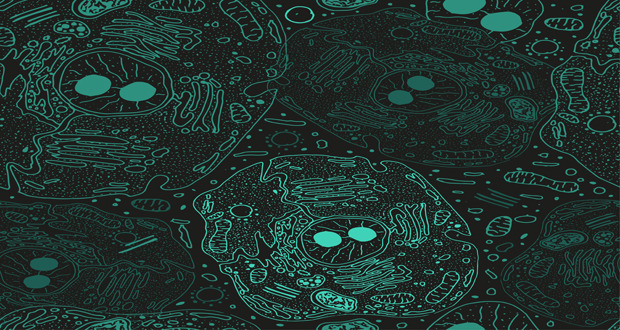 The delivery of membrane proteins to subcellular compartments is essential for eukaryotic life with errors causing severe diseases. Professor Michael Schrader tells us about his team’s work on the use of weather forecast technology to predict membrane protein targeting and how it can be used to explore biology and improve health

Proper sorting and delivery of proteins is of fundamental importance for cellular function and therefore the viability of any organism. Many proteins contain defined signal sequences and unique physicochemical properties that determine targeting to specific cellular compartments.

The majority of transmembrane proteins are inserted into their target membrane, for example the endoplasmic reticulum (ER), as they are synthesised by the ribosomes (known as co-translational insertion). Tail-anchored (TA) membrane proteins represent an interesting exception: they possess a single transmembrane domain (TMD) close to their C-terminus (C-terminal tail), which is released from the ribosome only after termination of translation. Thus, sorting and insertion require post-translational mechanisms1.

TA proteins are routed to the ER where they get access to the secretory pathway, but also to the membranes of other organelles such as mitochondria and peroxisomes (Figure 1). At all of those locations, they are inserted via their C-terminus, and expose their N-terminal functional domain to the cytosol. This makes them ideal adaptors for key processes at cellular membranes which require membrane anchorage – for example organelle division, apoptosis, vesicle targeting, membrane fusion, lipid trafficking, enzyme catalysis and anti-viral signalling1,2. Many TA proteins are therefore of medical importance and have been linked to human disorders associated with metabolic, developmental or neurological defects.

Despite their functional and medical importance, the mechanisms and signals mediating TA protein targeting remain unclear. Considerable progress has been made in the mechanistic understanding of TA protein delivery to the ER via the so called GET (Guided Entry of Tail-anchored proteins) pathway3, whereas targeting to mitochondria and peroxisomes is less well understood. Interestingly, mitochondria and peroxisomes share several TA proteins4, adding another twist to TA protein targeting in mammalian cells.

In our recent study, published in the Journal of Cell Science, we focussed on how targeting is coordinated to control organelle selection in mammalian cells5. We first performed immunofluorescence and expression studies to examine a number of TA proteins for subcellular localisation. This approach increased the number of known peroxisomal TA proteins and revealed additional TA proteins shared by mitochondria and peroxisomes. These findings then allowed us to analyse the C-terminal sequences of 51 TA proteins with peroxisomal, mitochondrial or ER localisation and to compare their physicochemical parameters.

C-terminal targeting signals of TA proteins are supposed to consist of general physicochemical parameters such as TMD hydrophobicity and tail charge. Our study revealed that a general property of all identified peroxisomal TA proteins is a highly positive net charge in the tail region, which distinguishes them from mitochondrial and ER TA proteins. We also determined that a hydrophobic TMD and low tail charge support ER targeting (Figure 1). 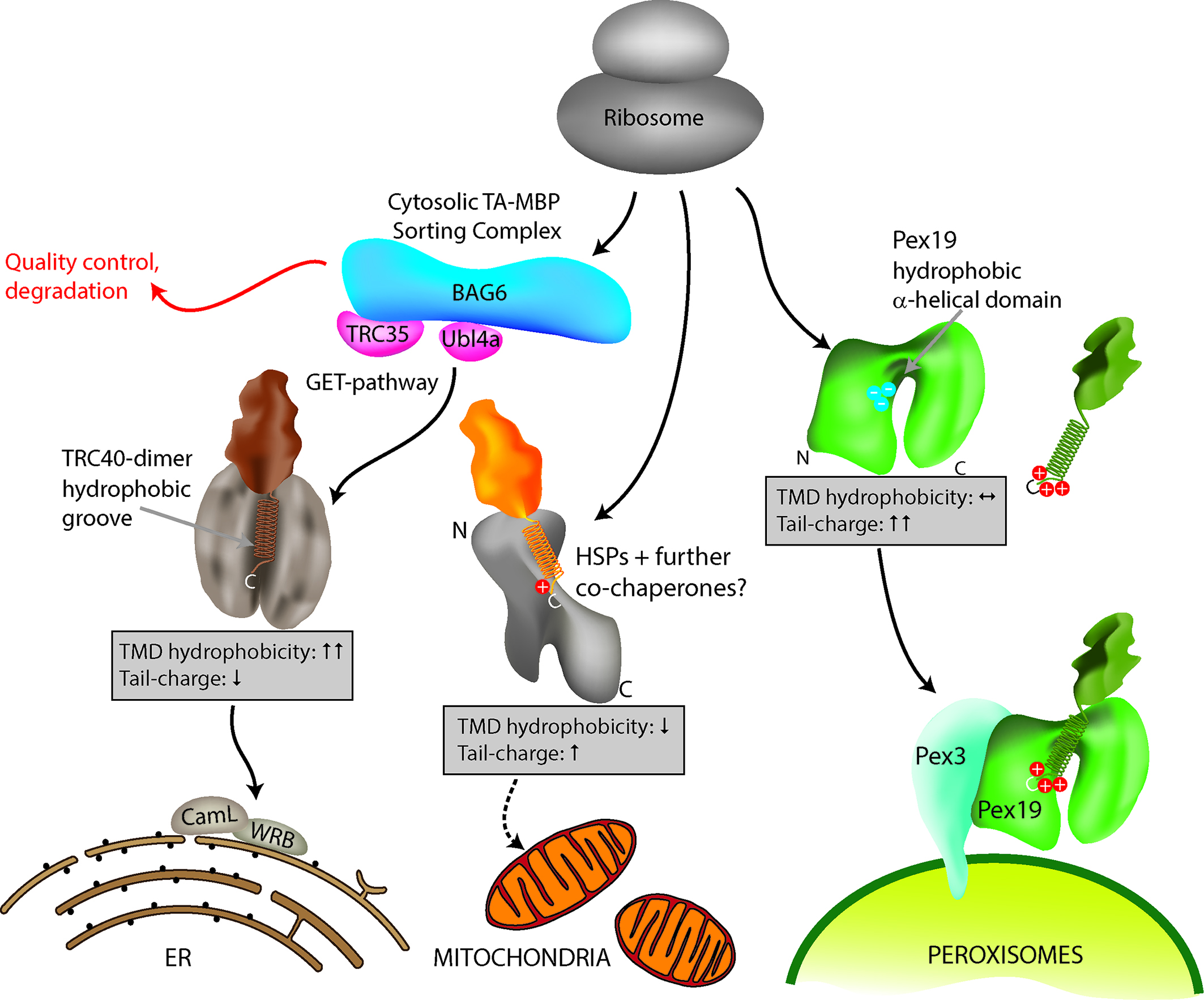 Figure 1: Model for TA protein targeting to subcellular organelles. Specific delivery of TA proteins to the ER, mitochondria and peroxisomes in mammalian cells is mediated by a combination of TMD hydrophobicity and tail charge. Targeting of TA proteins to the ER involves the GET (Guided Entry of Tail-anchored proteins) pathway. ER TA proteins interact with a cytosolic sorting complex (composed of BAG6, TRC35/GET4, Ubl4a/GET5) and are delivered and inserted into the ER membrane by TRC40 (GET3) and WRB (GET1). A WRB/CAML dimeric membrane receptor (functional homolog to GET1/2) accepts the TA protein from TRC40 at the ER. Figure taken from Costello et al., J Cell Sci 130:1675-1687. DOI: 10.1242/jcs.200204.[/caption]

Overall, neither tail charge nor TMD hydrophobicity alone directs TA proteins to their target organelle; we discovered that targeting is determined by a combination of TMD hydrophobicity and tail charge, and that both act as directly opposing signalling parameters (Figure 1). An increase in one can override the other and re-direct a TA protein from the ER to peroxisomes or mitochondria and vice versa.

An interesting and medically relevant example is fatty aldehyde dehydrogenase (FALDH), which has been linked to Sjögren-Larsson syndrome, a rare disorder characterised by skin defects and mental retardation due to toxic accumulation of lipid species7. Different splice variants of FALDH with peroxisomal or ER localisation exist8; both variants share a highly hydrophobic TMD, which (in combination with a negative charge in the tail), routes the major isoform, FALDH-ER, to the ER. The peroxisomal variant, FALDH-PO, only differs from FALDH-ER in its C-terminal tail, which is highly charged (+9.1), and thus able to override TMD hydrophobicity5. The membrane topology of FALDH was unclear, and we provided evidence that FALDH is a bona fide TA protein with its C-terminus anchored to the organelle membrane and the N-terminus with its catalytic domain exposed to the cytosol5. Knowledge on membrane topology assists understanding of lipid degrading pathways7.

Next, we aimed to use the compiled data to predict the targeting of uncharacterised TA proteins. In cooperation with Doug McNeall from the Met Office we adapted a machine learning technique, similar to methods used for weather and climate forecasting, to our biological problem. Using our data on TMD hydrophobicity, tail charge and organelle localisation; we trained a support vector machine (SVM) classifier, thus generating a statistical model to predict the probability of a TA protein to be targeted to each organelle (Figure 2). 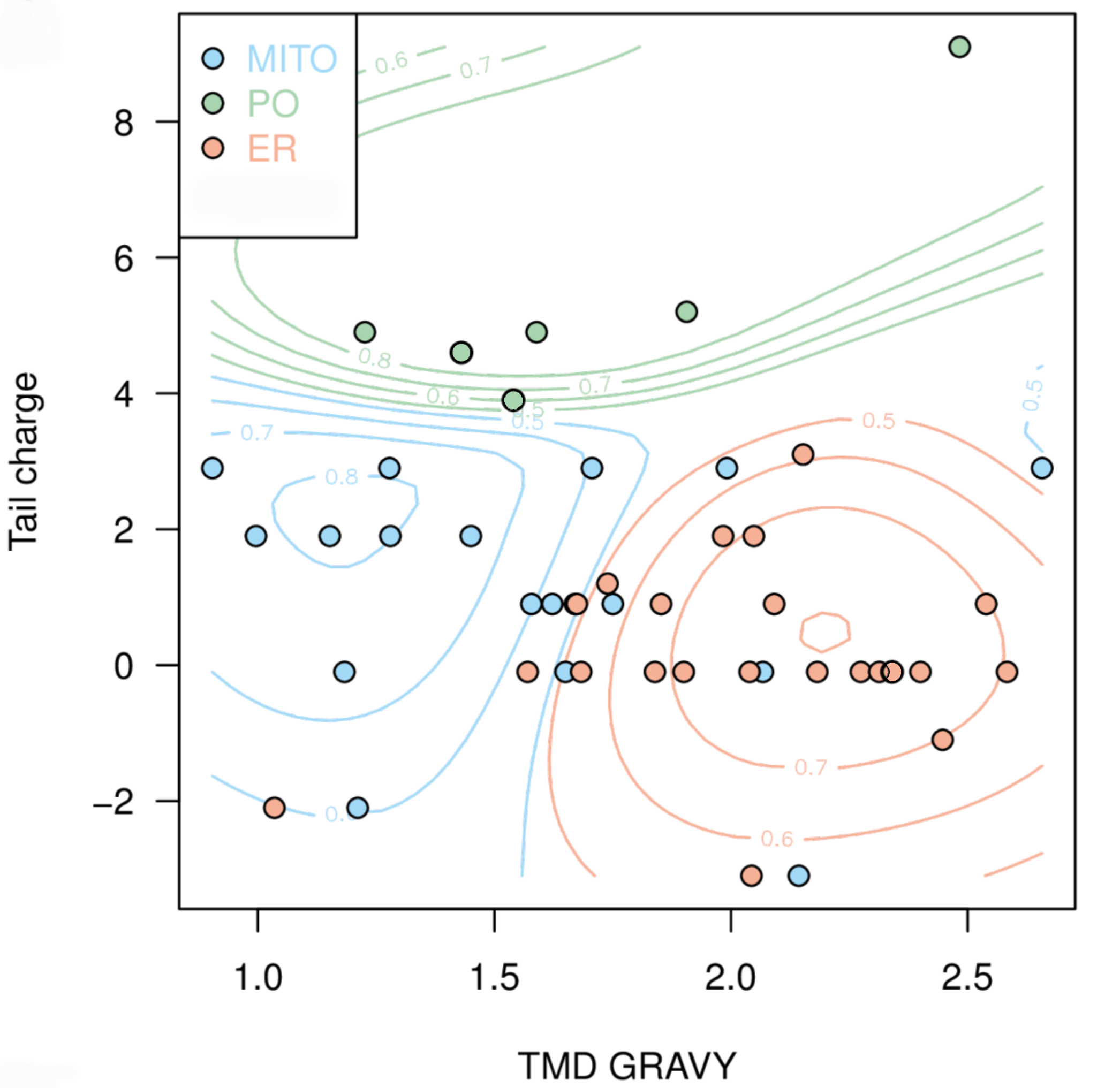 The predictive power of our classifier was assessed by the analysis of a published list of predicted human TA proteins9 which generated probabilities for peroxisomal, mitochondrial and ER targeting. We experimentally verified the predicted localisation of selected proteins. For example, ACBD4, a predicted peroxisomal candidate TA protein, was indeed found to localise to peroxisomes5. Due to similarities in the N-terminal acyl-CoA binding domain, ACBD4 shares 58% sequence identity with ACBD5, but the amino acid sequence in the C-terminus is significantly different.

It should be noted, that besides TMD hydrophobicity and tail charge, other parameters may influence the targeting and localisation of TA proteins in mammalian cells. Additional factors relevant for targeting could include the position of hydrophobic and charged residues in the tail, the helical content of the TMD3, or the accessibility of the tail region. Knowledge about those parameters could be added to the classifier and would further improve its predictive power.

It should also be considered that besides these primary targeting mechanisms, subcellular localisation of TA proteins can be further controlled by removal and destruction of TA proteins which insert into the incorrect membrane (Figure 1). Understanding those quality control mechanisms at organelle membranes will be a further challenge in TA protein targeting10.

However, our results now allow for the modification of the physicochemical properties of the TMD and tail region and for the tailoring of C-terminal regions with optimised targeting parameters. Knowledge generated in our study can support the design of membrane adaptors and the delivery of molecules to specific subcellular compartments. It may also support the design and targeting of drugs and benefit the pharmaceutical and health sectors.

The localisation and functions of many predicted TA proteins within the human genome are unknown, and many TA proteins are uncharacterised. Our predictor now allows us to link potentially new membrane-associated functions with peroxisomes and other organelles. First examples are the acyl-CoA binding domain proteins ACBD5 and ACBD4, which have been identified as bona fide peroxisomal TA proteins in our study. We very recently revealed that both ACBD5 and ACBD4 are involved in the association of peroxisomes with the ER11,12.

An intimate association of peroxisomes and the ER has already been observed in ultrastructural studies in the 1960s, but the molecular mechanism was unknown. We revealed that both ACBD5 and ACBD4 act as molecular tethers which interact with another TA protein, the ER resident VAPB (vesicle-associated membrane protein-associated protein B) to generate peroxisome-ER membrane contact sites11,12. These contacts are important for the metabolic cooperation of peroxisomes and the ER in lipid synthesis, e.g. of myelin sheath lipids13, and in membrane expansion/biogenesis of the peroxisomal compartment11.

The first patients with loss-of-function mutations in ACBD5 have very recently been identified14,15. They are characterised by retinal dystrophy, white matter disease and an accumulation of very-long-chain fatty acids (VLCFA), which can only be degraded in peroxisomes. ACBD5 deficiency is a novel peroxisomal disorder associated with impaired VLCFA metabolism and potential impairment of peroxisome-ER cooperation.

ACBD4/5 are just two examples of TA proteins where knowledge of the targeting location provided vital information that helped us to understand how these proteins function. Future studies will now have to verify the localisation of other TA proteins which were predicted by our classifier. Those studies need to elucidate their cell type or organ-specific expression, their cellular functions and their importance for human biology and health.

The Author Professor Michael Schrader is a molecular cell biologist in the Department of Biosciences at the University of Exeter. He studies organelle dynamics and cooperation in health and disease. m.schrader@exeter.ac.uk

The team: Dr Joe Costello is a molecular biologist at the University of Exeter. He is interested in studying how proteins are targeted in human cells and how errors in this process are linked to disease.

Dr Doug McNeall is a climate scientist and statistician at the Met Office Hadley Centre, Exeter.

Dr Markus Islinger is a cell biologist in the Institute of Neuroanatomy at the Medical Faculty Mannheim of the University of Heidelberg, Germany. He is interested in the neuronal impact of metabolic changes associated with organelle disorders.